Everyone has hopefully learned a few things since the outbreak.  I am still learning.  What is the data showing?

Did the summer heat kill the virus as hoped?  Apparently not.  (Ecuador gave a hint on that from the outset)

Outdoor gatherings - Not perfect, but much, much, much better.

Do masks protect you personally?  No.

Do masks protect others FROM you?  YES!  The Asian cultures, who have long before this outbreak, embraced community mask wearing, have greatly better health outcomes as opposed to western cultures.  Look at the data.  And not just China, whose dictatorship has more control.  South Korea and Hong Kong also have FAR better health outcomes than the US and Europe.

So the current data in cities of outdoor gatherings for protesters seems to indicate no significant increase in outbreaks.  Why is that?  The protests were outdoors and the protesters wore masks.  I attended a protest and only saw 3 or 4 people without masks out of hundreds of peaceful protesters.

There is also an interesting phenomenon about pre teen children.  It seems the original fear of them spreading the virus to older people has turned out to be in question.  Denmark reopened and sent 2-12 year olds back to school and the data showed no spike in the virus above normal.  That is good news for reopening the economy.  Parents can go back to work while children go back to school.

And although the virus can survive on surfaces like a door knob, it appears that transmission by such means is unlikely.  The CDC changed its website to relax that warning.  Also good news.

Why are NY city new daily cases down 95% in spite of much increased testing?  (Free testing for walk-ins no appointment necessary).   Because after its horrible start, based in ignorance (including mine), the community by and large has embraced mask wearing.  Not everyone.  Not everywhere.  (I don't wear it when out on a bike ride)

So let us open the economy.  Let us protect the elderly and immune compromised as best we can.  Let's send preteen kids back to school.  Let's wear a mask when shopping for groceries or other indoor places where community spread is likely.

On a trade related note a veteran once told me:  If there are 10 things you need to master to become a successful trader and you have mastered 9 of them, but the one that you failed to master was admitting that you are wrong and adjusting....  You WILL go broke.

This is a wonderful contribution and post. If I get a chance later today, I will revive our "post of the week" and maybe call it "post of the month" or in this case, even post of the year (-:

I agree with almost everything. I too went to a local protest with my kids earlier this month(my personal views were extremely different about cops than those speaking up that hate and distrust cops-unproductive hate-even blind rage. I chose not to post them at that time to avoid bashing these people who were very young, sincere but misinformed about police and other things-but they are our future and its coming whether we like it or not).

I also noted EVERYBODY wearing a mask. I went to church services the next day and out of 160 people, only 2 were wearing a mask. However, they were practicing social distancing with only every other pew open and people 6 feet apart.

So the liberals clearly own the far superior mask wearing and science on this.

I will disagree with mask wearing NOT protecting the person wearing one in the case of N=95 masks. That's the kind that I wear and they DO protect the person wearing the mask. I noted that almost nobody has these masks, so the statement is generally true for home made masks, which are almost all of them.

With regards to the outdoors being safer. This seems clear too and dilution/concentration of the virus could be responsible for most of this.  I noted the comment that recirculating the air indoors with AC would be bad but would think that it would greatly DILUTE the concentration. I can't imagine that recirculating would cause the amounts to build up that much over time to anything close to the amount you would get being unprotected, less than 6 feet away from somebody with stagnant air flow.

The science has  proven that higher absolute humidity(dew point) does cut down on the survival rates of the virus.  Basically, when you double the humidity, you decrease the amount of virus that survives for 1 hour by 50%

So we suspected that this might kill off COVID when the humidity doubled in the warm season, like it does seasonally every year with the flu............but for sure that has not been the case.

Part of the learning process for sure too. I suspect that COVID is SO contagious, that knocking it down by 50% is not enough to suppress it with higher humidity, so that by itself overwhelms everything else.

UV radiation definitely kills it pretty quickly, so one would think that beaches are pretty safe places.

With regards to the protesting. It appears that the rate of increase has been minimized by mask wearing, being outdoors and almost everyone being young. (there were 2 black guys older than me at the rally, everyone else was at least a generation younger). Many younger people get it and never know they had it/are asymptomatic.

I'm not sure how many people at the protests are all from the same county and using the county or even state stats might not capture this accurately.  However, if the protests were causing a huge spread, then that particular county would have the highest spike.........which isn't happening.

Of course the testing rate more than doubling is blowing up a higher number of cases reported as its picking up a ton of people that don't need medical assistance that would never have been tested before.

It's NOT going to make a difference with deaths however, which are a lagging indicator by around 2 weeks(the time it takes between testing positive and dying).

So deaths will be going up too and will tell us how bad it REALLY was 2+ weeks earlier.

Hospitalizations are also a solid reality indicator but many states, like MI don't report those.

And we are both learning more as we go along joj, with some of your points helping my understanding.......thanks much!

Another possible factor in NYC is that, since it was the epicenter of the countries COVID, earlier this year, so many people may have already had COVID and now we are getting benefits from herd immunity.

Also, the ones that were picked off with the first outbreak were easy pickins, mostly old/sick and the most vulnerable. The number in that group has been knocked down from COVID deaths.

This is an older article but makes the point.

Coronavirus Updates: One In Four NYC Residents May Have Been Infected With COVID-19, Survey Suggests

New daily positives with the much higher rate of testing and opening up.............and widespread protesting with no social distancing have been going up the last 2 weeks. Thursday set a new high for new cases.  Possibly, over half of this is from the increase in testing. Some is surely from opening up and poor habits and some from the protests.

Deaths  have been going down steadily for 2 months but those spiked higher on Thursday. 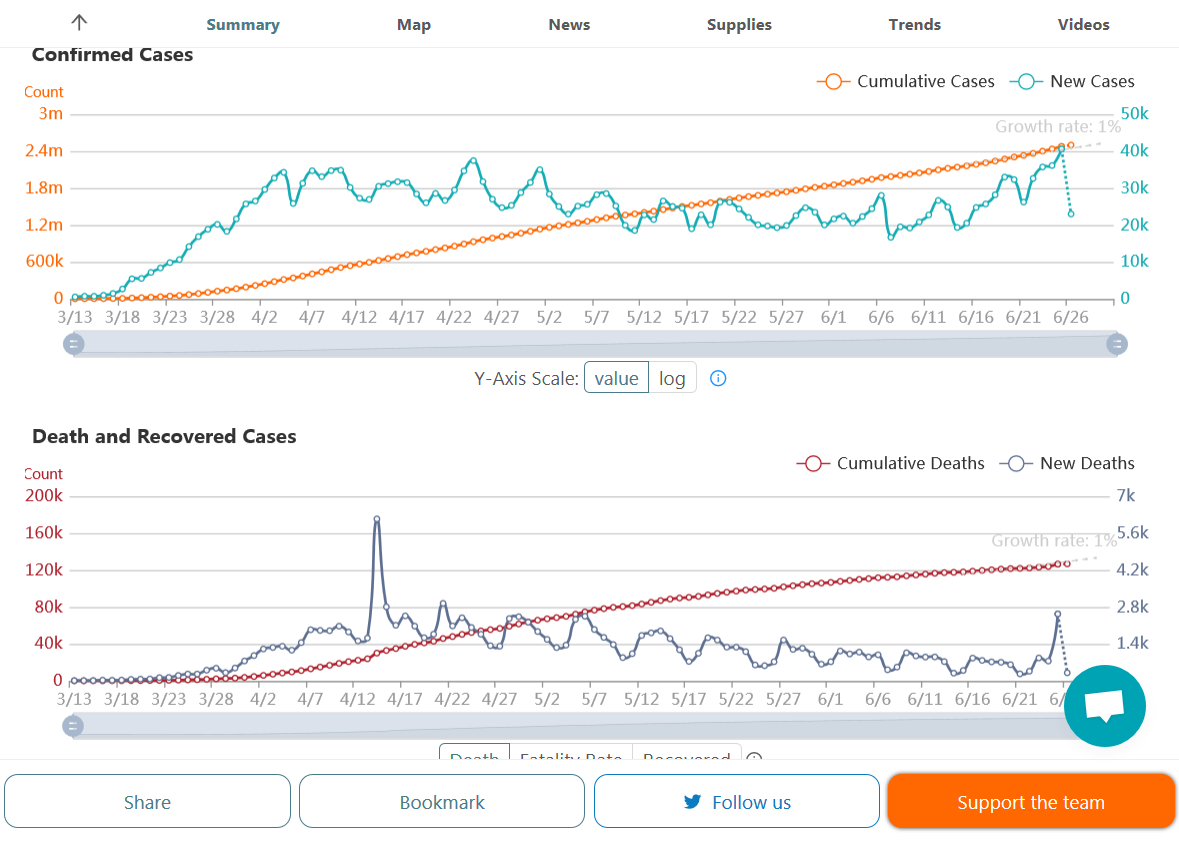