Now for some reasons why this might be the start of some thing different, and some things that have been with us for some time

China has had bank runs

China is having trouble finding customers for production

Dr. copper is some thing I watch, seems to have peaked which indicates a lack of demand for industrial use

Houses close to wealthy in NYC are building new homes as the used home market is limited, in the places they want to live [fear factor??]

Evictions for non payment of rent will soon start

Mortgage defaults will soon be a factor

Fed will be forced to bail out banks, as defaults swamp bank reserves

And if you don't think inflation is here

What was considered a middle class income for a family

Today my truck retails at 50,000 plus as does our Jeep SUV CAD

What do you think of inflation, wages needed today for middle class family etc.

Not even going to discuss pensions, elderly living standards

Some have trended longer and some may be just a dip in price,

Our basket is representative of the goods and services we all use and buy, obviously different people spend different amounts and buy different types from what we use to calculate the basket, but overall, we believe the products provide an example of a typical cart that allows us to measure on a yearly basis.  You can find below a more detailed list of what we included and the dates and locations prices gathered from

Cost of Living in United States

By City in United States

A Look Back At What Things Used to Cost

What did things cost over the decades, compared to today?

How Much Prices Have Changed For Different Goods And Services Over The Last 20 Years, Graphed

Getting a raise is great. You suddenly have more money to spend on the things that are important to you and to save for the future. But earning more money won't get you very far if student loans, medical bills and child care are so expensive that they eat up all your additional income. Unfortunately, that is the situation that we as a country find ourselves facing, as a new graph from personal finance site HowMuch makes clear:

This graph is modeled after one created last year by economist Mark J. Perry, who used data on inflation-adjusted price and wage changes from the US Bureau of Labor Statistics. People who are bullish on the economy (and modern capitalism in general) tend to emphasize how affordable consumer goods have become, and that's certainly true when you look at TVs, toys and personal tech. But as consumer goods have become more affordable, the prices of essential services like health care, college tuition and child care have risen much faster than wages — meaning that people are spending more of their income on things they can't meaningfully opt out of. So if it feels like student loans, health insurance premiums and day care bills are wiping out too big a chunk of your paycheck… well, that's probably why.

It's interesting that the 3 fastest growing areas on this chart are heavily government subsidized. All but child care and wages are subsidized.

Things not subsidized same or cheaper.

Basic principle of economics.  When you inject money into a system,  prices go up. They'll find a way to use it.

Back in the 70's,  when government decided to make education affordable, I was paying less than 500/semester at  a state university living off campus. Between summer jobs and the GI bill,  I was living comfortably.

I think it's safe to say the tuition has substantially outpaced inflation. Can't imagine getting the same education without massive debt.

"It's interesting that the 3 fastest growing areas on this chart are heavily government subsidized. All but child care and wages are subsidized.

Things not subsidized same or cheaper."

In health care, I believe the system is totally broken and corrupt and only socialized medicine will ever work to serve the needs of the most Americans..............but with college tuition, its insane!

Here's an opinion/case to back you cutworm! 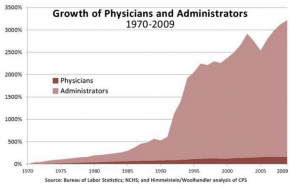 These are my views on health care.

"In health care, I believe the system is totally broken and corrupt and only socialized medicine will ever work to serve the needs of the most Americans..............but with college tuition, its insane"

Let's think this out:

so some socialism is bad but more or all socialized  medicine will  work to lower cost for everyone?

NOUN a political and economic theory of social organization which advocates that the means of production, distribution, and exchange should be owned or regulated by the community as a whole

"so some socialism is bad but more or all socialized  medicine will  work to lower cost for everyone?"

We don't have a non socialized solution to the current badly broken health care industry that would even get us in the vicinity of being viable.

The rational of your statement is based on applying a blanket statement about something failing in some realms because of the improper way that its being applied and assuming that it can't be used correctly to fix a totally broken problem.

Obama Care was a bad fix.

It's NOT all the health insurance industry that gets all the blame(intentionally).

They have to pass on the real costs.

In almost every free market, demand and supply rule for prices. This is good............for those markets.

Health care is different. You can't shop around to get a cheap heart operation. When you get sick........or have an emergency, you need immediate care, not the cheapest after you check out prices.

We pay 3 times more for everything than any other developed country........because of corruption, bribes and politics.

There is a near 100% chance that this country will eventually adopt a system that covers most people that want insurance.

And it won't be private health insurance that covers the ones not insured because they cant afford it.

It's a tough pill to swallow for those that work their butts off  and pay money for their coverage.............that others would get it for free.

Especially for the ones with great group plans with good rates because their employer is footing a big part of the bill.

Over the last 10 years, my wife and I had no health insurance half of the time. I have a serious autoimmune disorder and before the change that eliminated no coverage for pre existing conditions, we were screwed.

We also got price gouged badly. We saved 90,000 in yearly premiums but not having coverage and get REAL lucky with no major incidents when there was no coverage.

Before they got rid of the pre existing conditions, they would write a new policy and start over every year, so that conditions from previous years don't have to be covered.

Also, the price of cars or tv's should be set by demand/supply/cost conditions in the free market. Same with most everything.

But people don't need new cars or new tvs or new computers. If they are real poor and cant afford  a car, they either drive a cheap clunker or go without. Same with the other CONVENIENCES and LUXURIES that should be priced based on the market conditionss.

Health care is not a convenience or luxury. It's a right.

Deb and I know what its like to NOT have healthcare for numerous years. It turned out great because we were extremely lucky but mainly because the system is so screwed up that taking that high risk PAID OFF HANDSOMELY with the $90,000 we saved.

We just started our first group policy  in almost 15 years on July 1st.

During years we had no insurance.........I let things go. Then, we would get health insurance for a year and I would have everything done.........hernia surgery, hemmoroid surgery, 2 eye surgeries, elbow surgery...........and hit the max out of pocket expense early...........then get everything else for free during the rest of the year.

Healthcare is not a right.

People from Canada come to the US for treatment they can't get in Canada's system.

I agree that right now, Canada's system is better than ours thanks to decades of government interference.  More government is not the cure.