metmike: This was from LAST WEEK's weather that has mostly been dialed in now.

It was a scorching dry week for the Iowa #CropWatch20 #corn and #soybeans. Beans lost some yield potential this week but above avg results are still expected for now. Up to 20% of the corn ears may contain mold, esp. ones that are low to the ground. Ear sizes are variable. 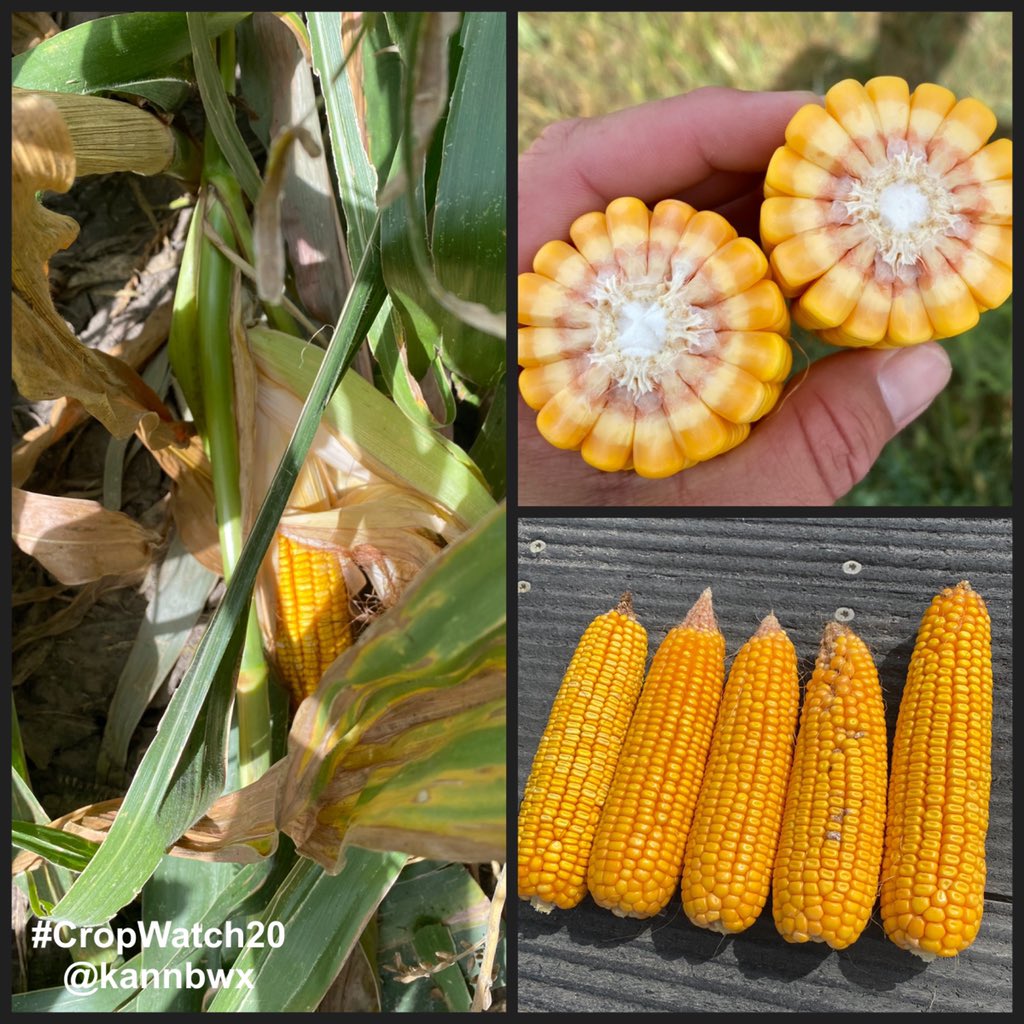 Expectations for #CropWatch20 #soybeans in the Western Belt declined as well in the hot and dry weather. Kansas and Nebraska have reduced expectations from a week ago, but a Friday rain in Minnesota may have offset the week's unfavorable heat 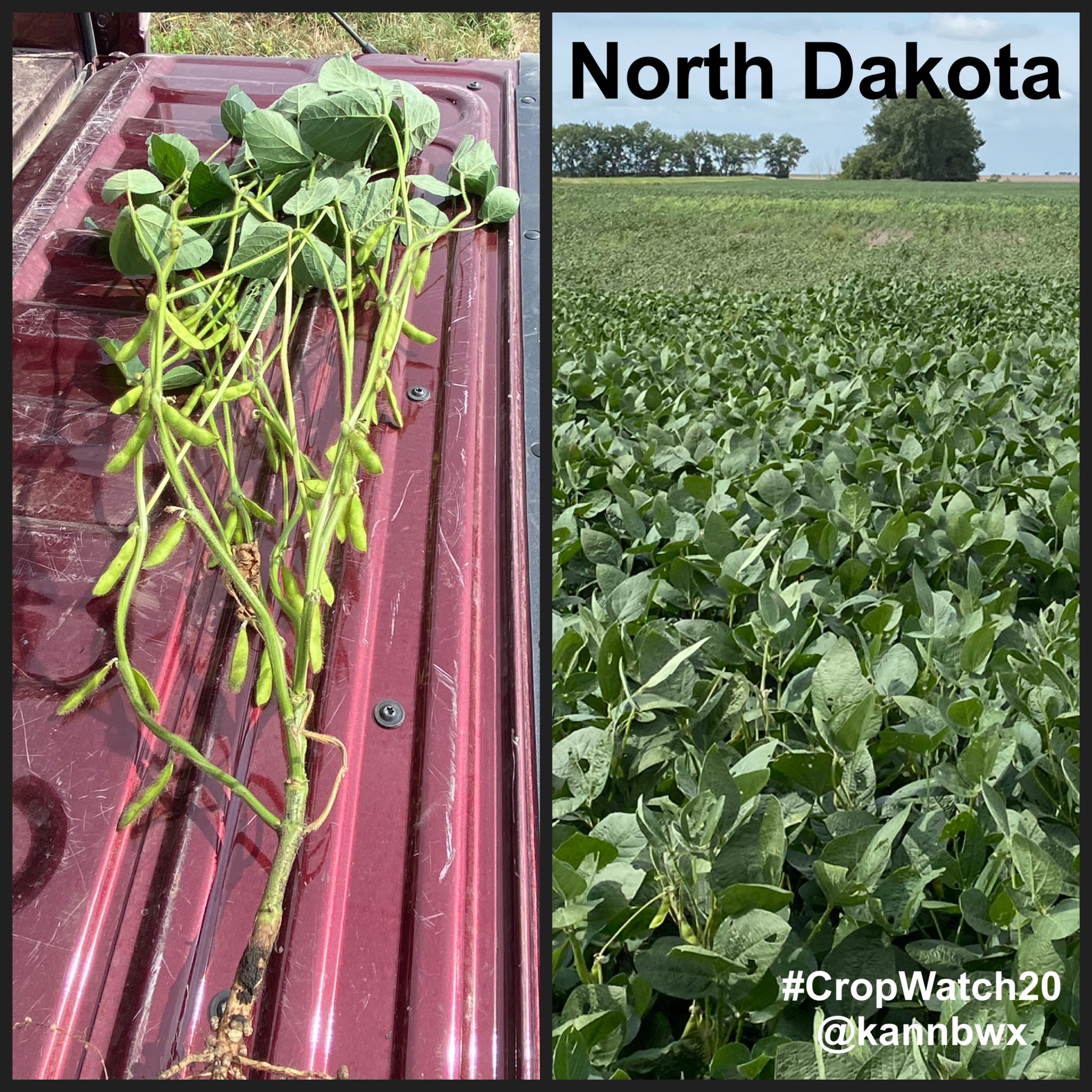 It was a really hot week for the #CropWatch20 #corn in the Western Belt, and expectations declined a bit in Nebraska and North Dakota. Collectively the yield potential on these four fields is slightly above average for now.

Crop ratings will drop again this afternoon but much of this has been dialed in with the massive rallies in August.

The places that will see the biggest drop are in orange/red below:

On top of the dry weather, we had some major heat last week in those dry spots.

Corn was down another 2% after being down 5% last week. This was apparently 1% better than what the trade had expected.

Beans down another 3%, after being down 3%? last week. This was in line with expectations.

Todays price action suggests an exhaustion, which makes sense since much of this has been from the hot/dry weather and the damage from that is almost over.

Beans gapped a couple cents  higher and took off to strong double digit gains but sold off and closed lower than the open and left only 1 tick of opening gap.

Filling that gap completely is a gap and crap signal which is a powerful exhaustion signal........that suggests prices, short term, going in the opposite direction of the previous move(that was just exhausted).

Here are some previous posts on the gap and crap formation on price charts.........commodities and stocks. Actually anything that is affected by human behavior.

A gap lower on the open tonight would be an especially powerful negative formation if left unfilled for the beans.

It would also leave an island top for the beans.

A gap lower for the corn will be bad news technically too, unless its filled quickly.

We got that gap lower opening and sold off to modest losses.

However, the c and even more so the beans have bounced back towards the opening price.

If they  managed to fill the gaps, it would be pretty impressive.

Corn barely filled the gap lower too but is down almost 3c, with beans getting a couple cents higher, now around unch.

A little perspective on this year's #corn crop versus 2012. #oatt 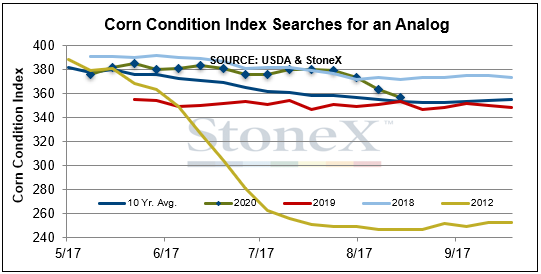 Good riddance August!  Not only were you dry, the only time there was widespread rainfall, you had to include historically destructive storms.  On to September...  Image is rainfall departure from Aug 1st - Aug 30th via the Iowa Environmental Mesonet #iawx 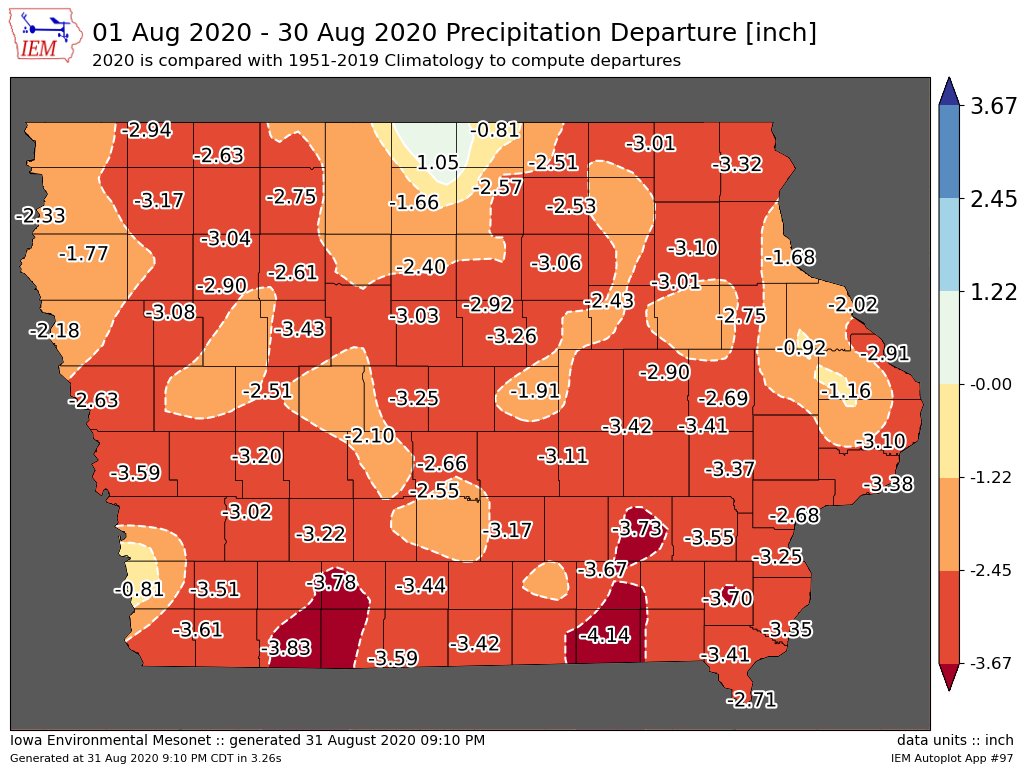 Corn bulls are pointing to disappointing rain totals in some of the dry areas of Iowa, Nebraska, and Illinois that were hoping to get a drink. The funds are thought to still be short around -50,000 contracts so we could see a few more exit and buy back their positions 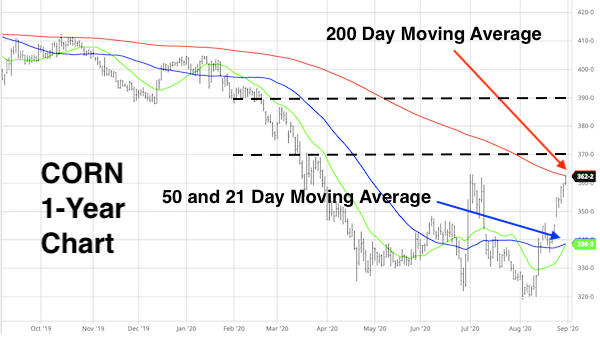 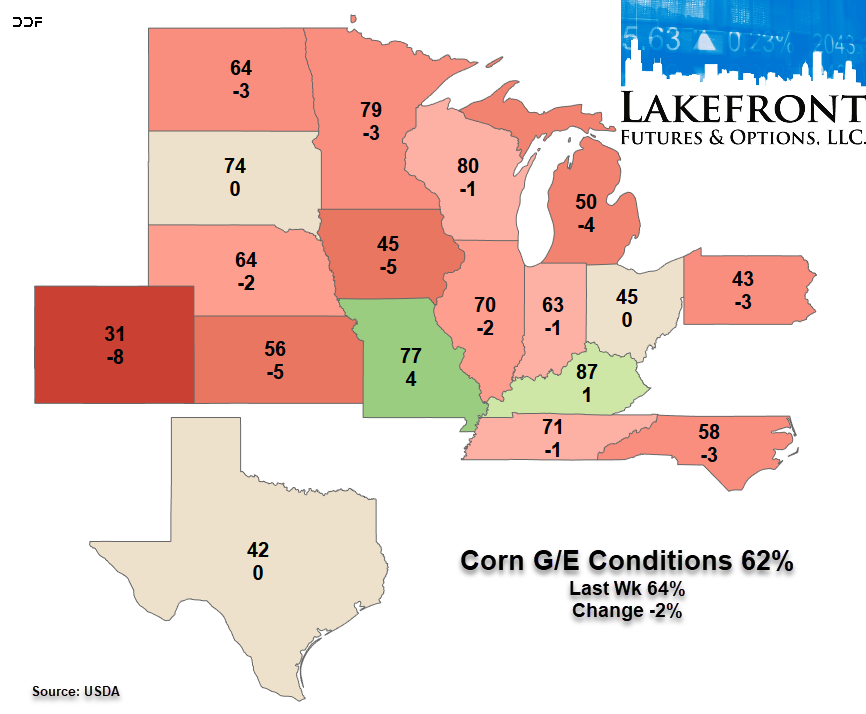 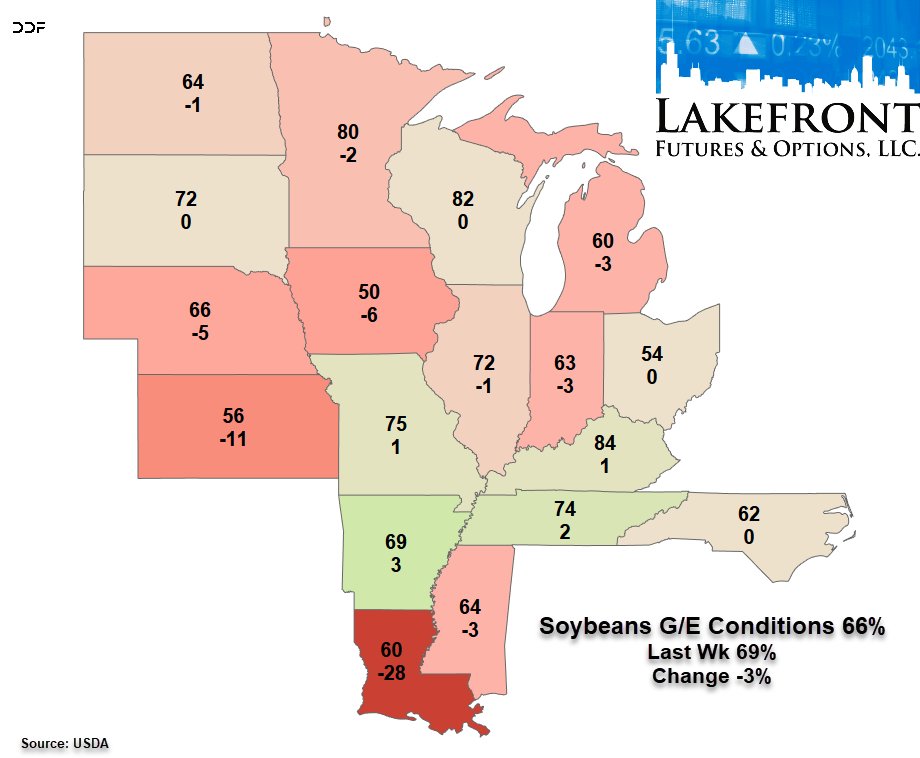 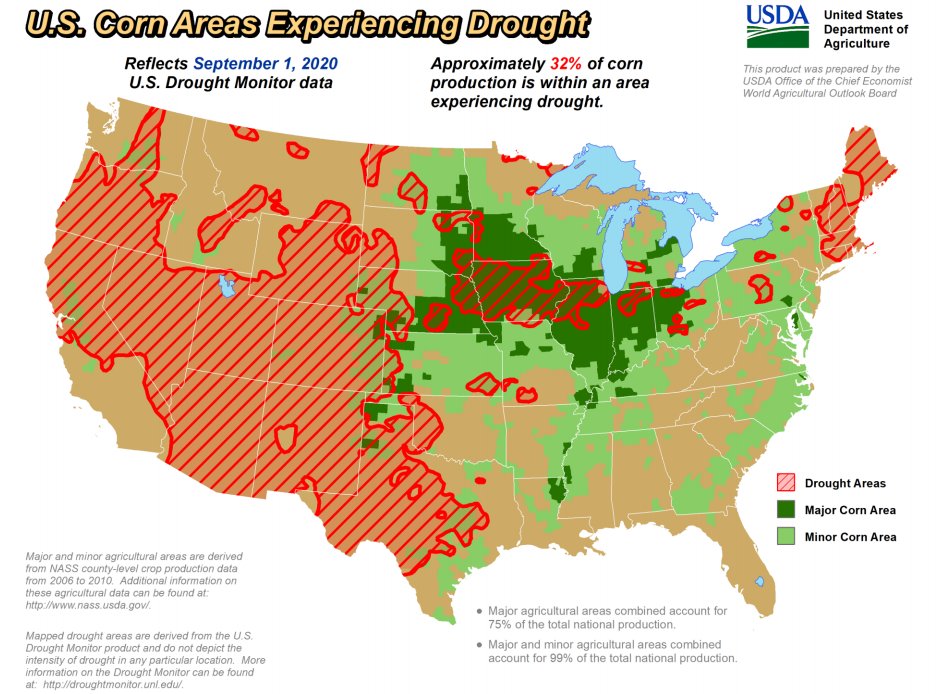 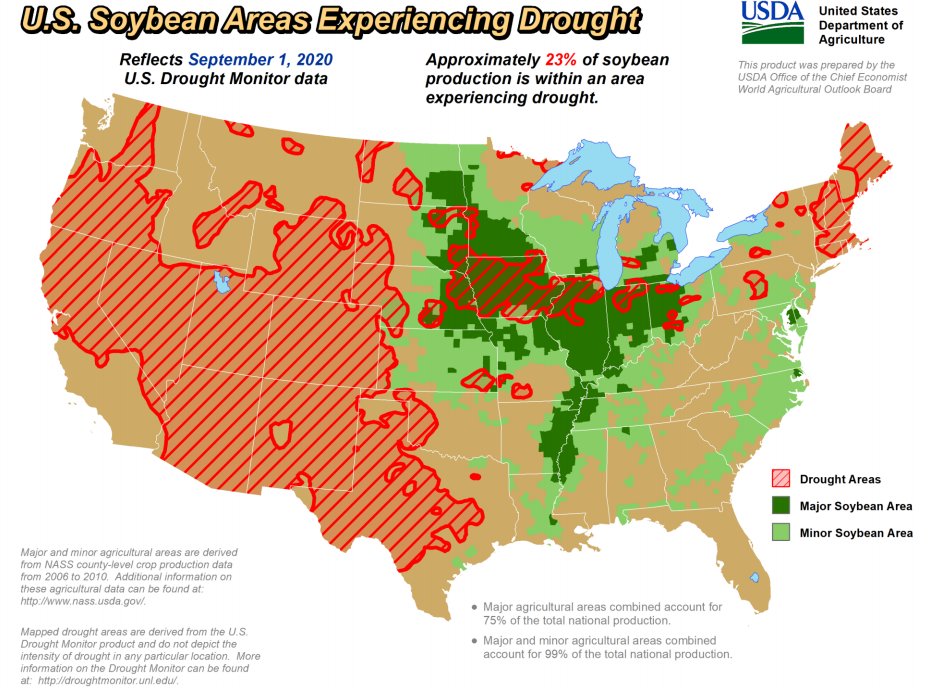