Previous thread on the tropics/Laura:

This includes numerous graphics and  information about hurricanes.

Entering the Peak of Hurricane Season

September is the peak month of hurricane season, and the most active day of the year is around Sept. 10, on average.

This doesn't guarantee every Sept. 10 will have a rash of Atlantic named storms.

There's an overlap of favorable factors in early-mid September, including ocean water reaching its highest temperature, the atmosphere's ability to generate thunderstorms hitting its peak, hostile shearing winds declining to a minimum and a parade of disturbances known as tropical waves acting as seeds for development that, while peaking in July, are numerous in September.

Other Areas to Watch

We're also currently watching two other disturbances in the Atlantic for possible tropical development as we move into the peak month of hurricane season.

A broad area of low pressure located in the central Caribbean is also being tracked by the NHC.

This system is moving quickly westward through the Caribbean and is producing numerous showers and thunderstorms. Conditions are forecast to be conducive for this system to gradually organize, and a tropical depression could develop in the next couple of days.

Regardless of development, this system will track toward Central America and Yucatan later this week. Areas from Jamaica to Honduras, Belize, Guatemala and the Yucatan should monitor the progress of this disturbance, according to the NHC.

The NHC is also watching a tropical wave that will emerge into the far eastern Atlantic from Africa in the next day or two.

It's too early to know whether this system will eventually grow into a tropical depression or storm. We are also too far out in time to know whether it might affect land areas in the future.

This may seem surprising but only 11 observed Category 5 hurricanes in the Gulf of Mexico in the last Century+ Why don't more hurricanes become (or stay) Cat 5 once in the very warm Gulf of Mexico?  There really is no shortage of tropical storms or minimal hurricanes each season

This developing Caribbean system will be competing with the newly-formed tropical depression off the East Coast of the United States to become the next named system of the 2020 hurricane season: https://bit.ly/2GgRFqA 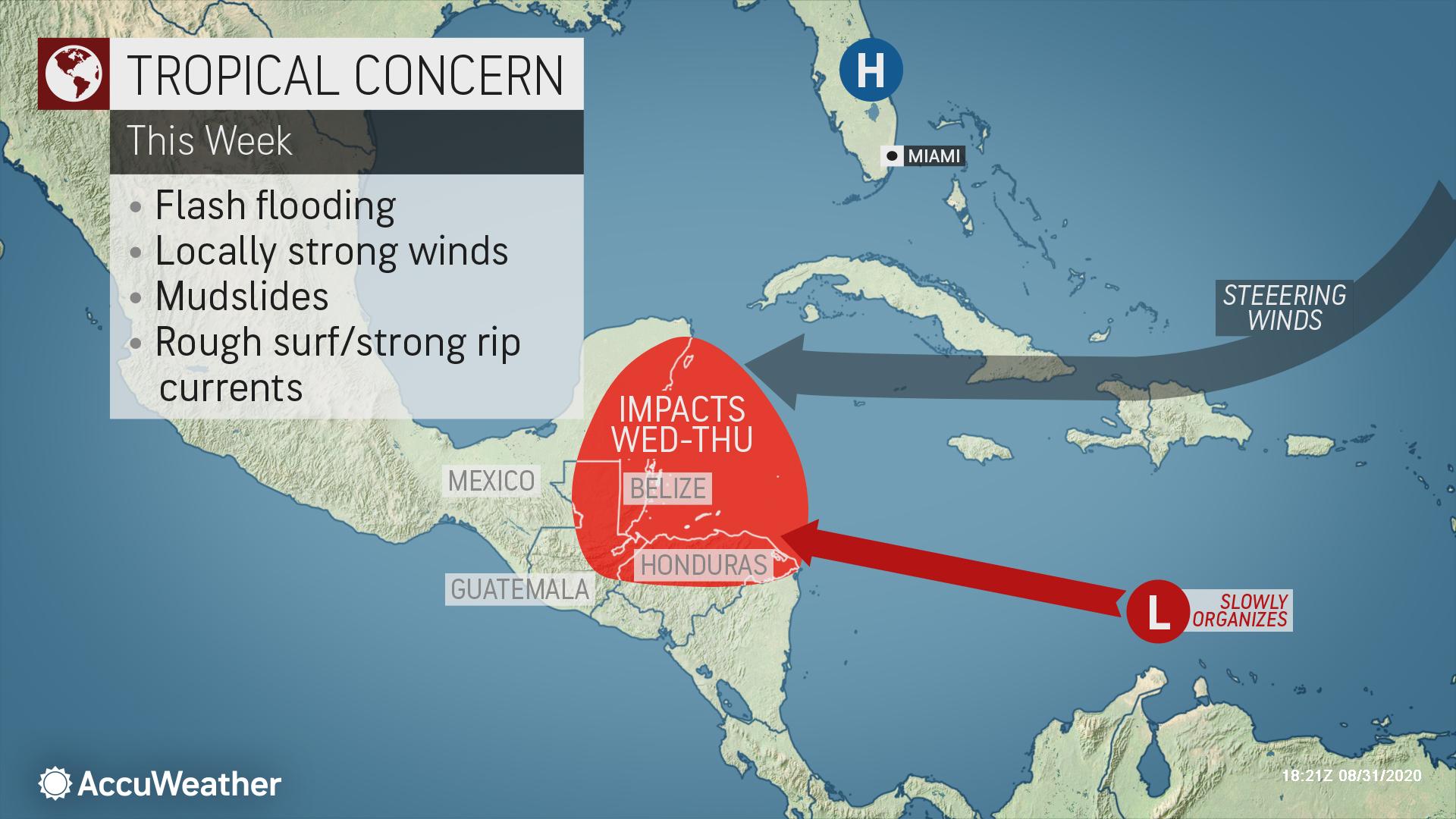 Getting a bit more active but no immediate threats.

Possibly the wave off the coast of Africa right now, might strengthen in the Central Atlantic early next week.

80% chance of a tropical depression in the Central Atlantic next week.

90% chance of a tropical depression in the next day in the Central Atlantic.

It does not appear to be a threat to any of the US, nor is there a threat from any other systems.

We are approaching the peak seasonal time frame for tropical activity.

Here in the most active early season so far, its looks relatively quiet.

This will be TS Paullette and be the earliest P named storm since we started assigning names to Tropical Storms.

This was the previous record earliest P name.

Another system with potential is even farther east, just off the coast of Africa right now that has a good chance to become Rene later this week. Like Paullette, it will likely stay in the Central Atlantic and not threaten the US because of the upper level flow right now.

This would be the earliest R named storm. You might remember this one, that came after Katrina in the GOM 15 years ago.

As expected,  we have TS Paulette. No threat to the US.

The next Rene will be much stronger but also is no threat to the US  as it stays in the Central Atlantic.

New disturbance in the far Southeast Atlantic will likely become Sally this weekend.

There were 28 storms that year.

We are almost at the halfway point in the tropical weather season.

No threats to the US right now.

We have our Sally but it's NOT the system that I thought would be Sally.......and it IS a threat to the US.

Sally is just barely a tropical storm and predicted to hit around New Orleans on Tuesday as a minimal hurricane.

80+ deg. is the temp we want to see to sustain a hurricane.  Looks like there are some spots in the W.GOM right now that are in the U-80's!

But not quite as warm in the E. GOM, with green colors and mid 80's,  where Sally will be tracking so this lessens the chance of explosive/rapid development  a bit but plenty warm enough.

The next system after this will be named Teddy( I was guessing that this one would be Sally) and break the record for the earliest named T storm, that right now, stands as Tammy on October 5, 2005.

Future Teddy is way out in the Southeast Atlantic and will likely become a hurricane next week but be no threat to the US.

Right behind Teddy, will be Vicky. Around 60% chance of Vicky in the next 5 days, with no threat to the US.

Vicky  will be storm #21 for this Atlantic hurricane season.............which is just now passing the halfway point.

The record number of named tropical storms was 28 set in 2005. This record will be obliterated!!!

Indicates a tie for the earliest/next earliest formation date

Forecast for Sally not much changed, just a tad to the left of the previous forecast.

Speeding up initially, so hitting LA early Tuesday. Then slowing down, so heavy rains a big threat.

Forecast to be a minimal hurricane still.

Not alot of change. Hurricane, early Tuesday along the LA coast.

This will cause some shut in production for the energy industry.

Unlike Laura that was a huge wind maker and moved so fast that rains were not a problem, Sally will not have as much wind but will slow down, so that rains over a foot along and just north of the coast will be the main issue.

Areas hit the hardest will be from far Southeastern LA to MS/AL/far west FL panhandle.

We also have Vicky and Teddy as expected.  New records for the earliest V and T named storms.  Up to 21 named storms in the Atlantic basin and just past the halfway point climatologically.  No threat to the US.

Vicky will fizzle but Teddy could become a major hurricane in the Central Atlantic........with no  threat to land.

Updated forecast for Sally are to 110 mph on Tuesday which is the bottom of a cat. 3 major hurricane.

Landfall looks like around the MS coast very late Tuesday.

Areas to the right of the hurricane, as always get the worst of it because the speed of the storm adds to the winds circulating around it.

Sally has shifted slightly farther to the right and is a minimal hurricane with no threat to get much stronger between now and landfall early Wednesday.

Winds will NOT be the main issue, though they will be very strong along the coast. The slow movement and "dirty" right side amplification of weather elements means that Alabama to the far west Florida Panhandle coast will get the most rain, which is the biggest threat............over a foot of rain possible, especially around the Mobile Bay of AL:

No changes to the rest of the tropics except to add our latest potential new system, that may become Wilfred in several days.

This will be the earliest W name, replacing Wilma from October 17, 2005. Wilma was a whopper in the E.Gulf and Florida Peninsula and that name was retired.

Sally is rapidly weakening at 3pm central and will be a tropical storm shortly. Also picking up speed a bit. So the rains will not be as long lasting in new locations.

Sally will be absorbed by a frontal boundary in the Southeast US later this week.

2 new tropical systems could be named in the next several days.

They will have the names Wilfred and Alpha.

Yeah, that's right, we will run out of names and start using the letters in the Greek alphabet.

I will guess that we could have another 10 storms.

I will leave this as the last page for the rest of the week and make updates above it to make it easy to track this system below:

We will be able to track hurricane Sally, then the remnants for the rest of the week with the graphics below that will be updated automatically/constantly during this period.

So long Sally..........hello Wilfred(the next named storm and last before we go to the Greek letters) 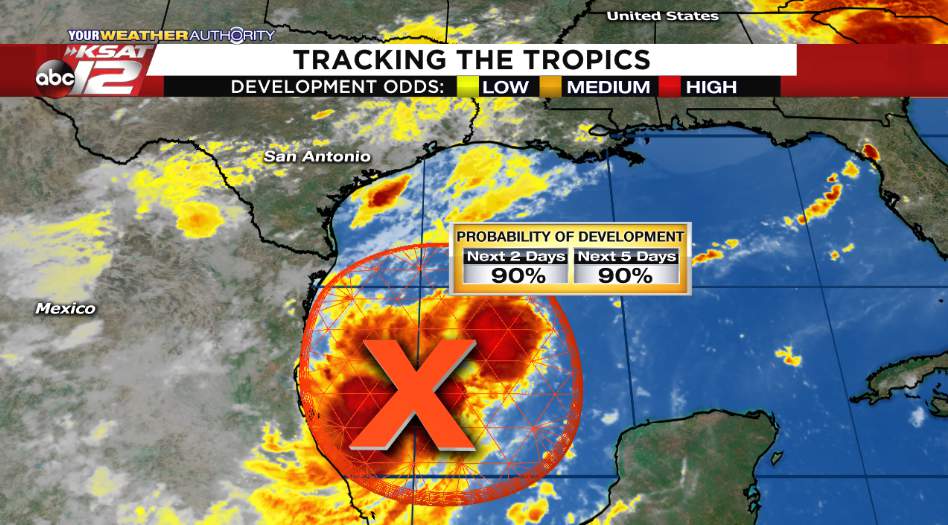 We got the W named storm from the one in the  Southeast Atlantic. Wilfred is not threat to land.

However, the next named storm in the southwest GOM will have some affect on the US. This one will be called Alpha after it develops and could become a weak hurricane, while meandering around in the far western GOM.

The graphics below will allow us to monitor Alpha, after it develops, then  over the next week.