Elon Musk took 4 Covid test in one day... all from the same machine.

Maybe it's some sort of quantum effect. Ya know,  like when your perception/belief actually affects the outcome... I think a great deal of the covid outcome is strongly related to perception and the shaping of same is crucial.

That's the problem with covid.  I don't think anyone really knows whats going on.   Or if they do,  they aren't telling.

The graphs and my explanations  below tell us how bad it really is or isn't.

1. Note graph #1, new daily cases: Even though new cases are soaring higher, testing positive and not getting very sick is not a real bad thing. This is the group that has been soaring higher and inflating the new positive rate. They exist of course but many like this existed in the Spring but didn't show up because they were not tested. See graph 1 below.

2. Note bar graph number 2 below: It shows people getting sick enough to be hospitalized. In the Spring, ALL these people showed up because all the really sick ones are always in the positives.

3. We peaked in the Spring. Then things improved greatly in May and thru the first half of June and were headed in the right direction.

4. Cases suddenly spiked higher in June. Despite much higher positive cases with the 2nd peak in July(after the protesting spread COVID that was covered up and we opened things up greatly, which was the main factor in many states) hospitalizations did NOT peak higher. The exception was protest aged people that did peak higher in all categories. They also were the majority of new cases.  This is one reason why deaths were less than half of the 1st peak. This age does not get as sick as old people.........many that have lost their good health.

5. After this subsided with assistance of warm/humid weather(that had started to help alot in May) things got better for a couple of months.

6. Cooler/drier weather and the Flu/COVID season hit in September. Positive cases have been increasing for 9 straight weeks. The new record for positive cases is more than 4 times higher than the record in the Spring....160,000 yesterday. But look at hospitalizations! They are still just below the July peak and well below the April peak.

7. With the flu/COVID season just starting, it's likely that new cases will continue higher and things will get worse than they are right now. But we are being told that they are 4 times worse using new cases as the metric/standard. This is complete BS.

8. The truth is that things ARE getting worse....just not 4 times worse and in fact, are not as bad as before YET. They likely will continue worse for several months because of the season(virus's love dry air-when you take the dry air outside inside and heat it up-it get drier and it doubles the amount of virus that can survive in the air with time air compared with the same air that has double the humidity-this is the science and its coming).

9. It's almost as bad as it was in July for hospitalizations and we have a ways to go for it to be as bad as it was in late April. I think that we could get there in December because of the weather and the vaccine is months away from widespread distribution.

10. If/when we do peak, the positive cases might be close to 10 times what they were in April.......or more than double where they are right now.  This is possible based on a  worst case scenario wild guess and using previous flu seasons as analogs. In that worse case scenario, the actual hospitalizations would also set new records and could be double the old record in April.

11. Note chart #3: Deaths are occurring at an even lower rate compared to new positives and hospitalizations because we have numerous treatments that we did not have in the Spring. Deaths right now are only half the peak rate in the Spring, even though daily positives are 4 times higher.

12. However, if we doubled the positive rate from here, up to 300,000+ for instance, even deaths/day could get  a bit higher than they were in the Spring at the peak  this Winter. 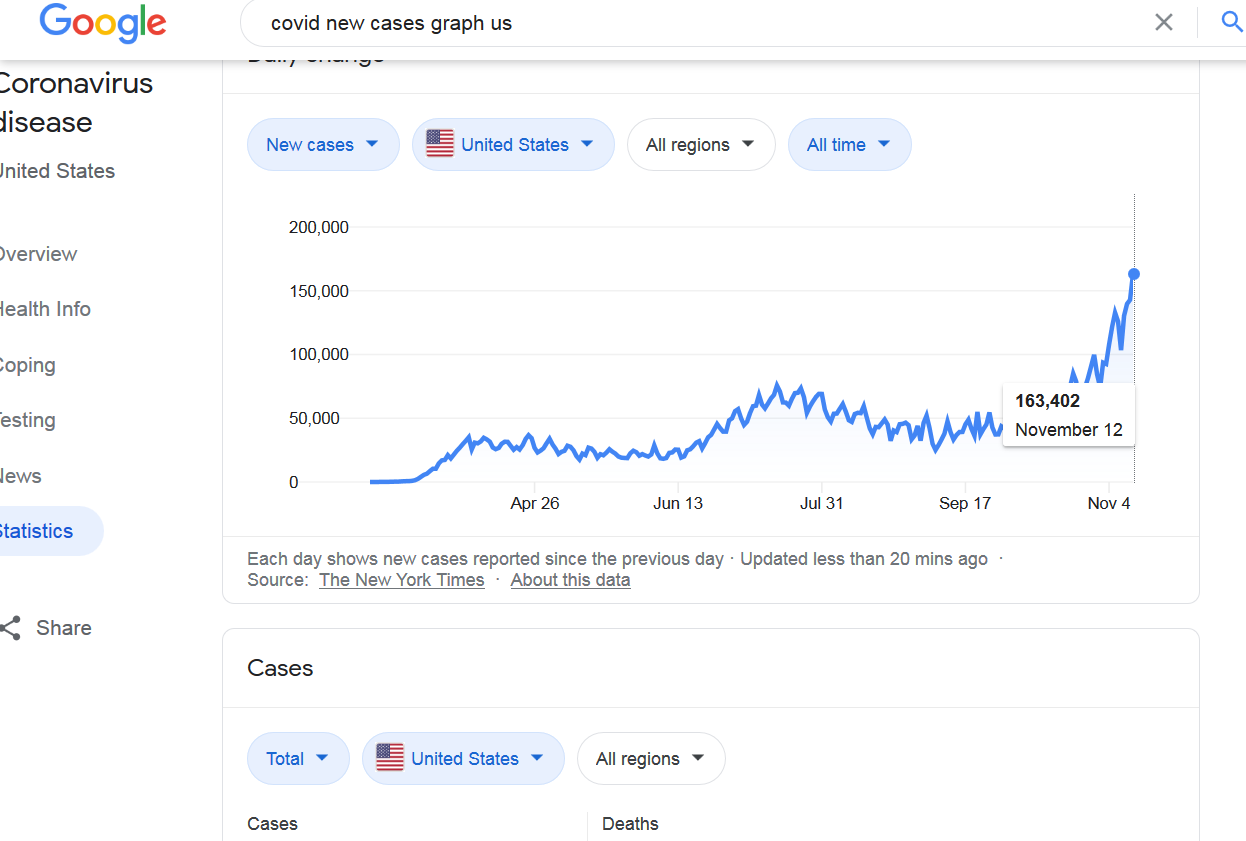 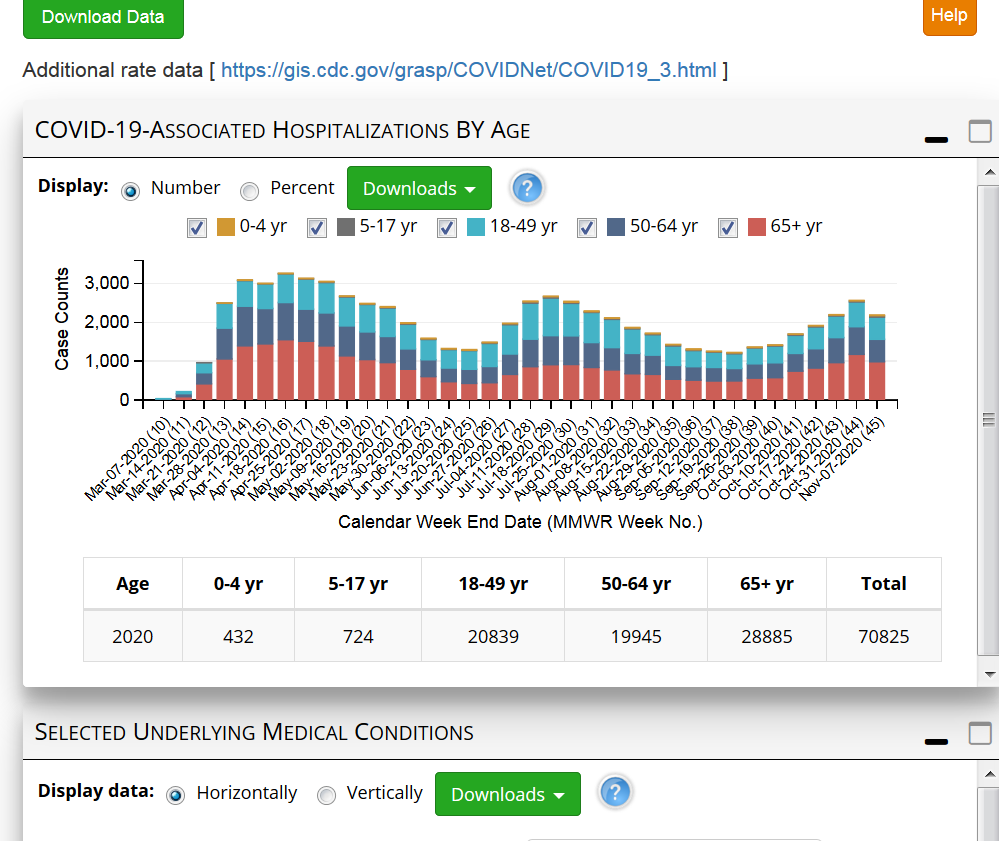 Graph #3 Deaths from COVID-still only half of the April peak but increasing. 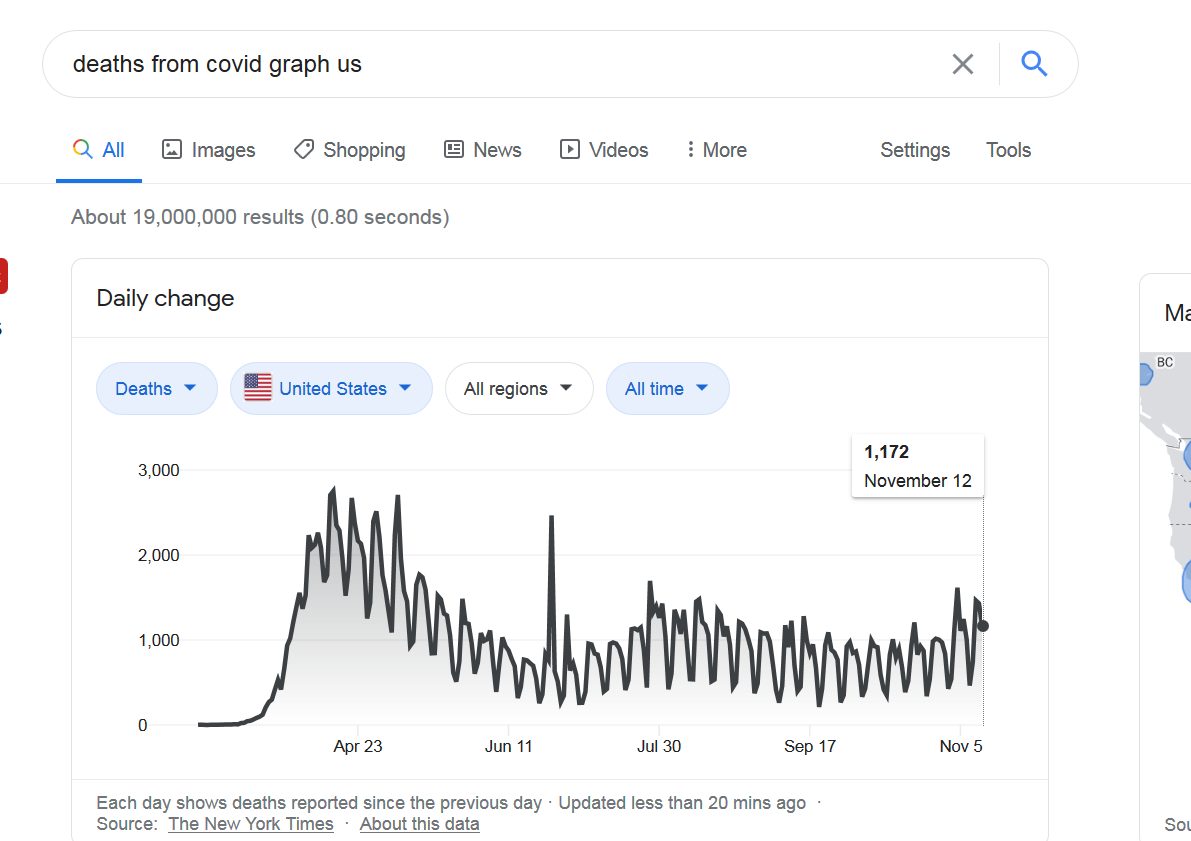