With satellite imagery, you can watch the last solstice of 2020 just like an astronaut.

Today marks the winter solstice in the Northern Hemisphere — the shortest day (and longest night) of the year and the beginning of the winter season. The event, which also marks the start of summer in the Southern Hemisphere, is caused by Earth's axial tilt and the planet's motion as it orbits around the sun at the center of our solar system.

Earth doesn't sit upright as it circles the sun. Instead, it orbits on its axis at a tilt of 23.5 degrees. Our planet's Northern and Southern hemispheres take turns with sunlight, trading places when it comes to seasons. So, on the winter solstice, the planet's Northern Hemisphere is turned as far away from the sun as it ever is.

And satellites orbiting Earth give us a unique glimpse of what this event looks like from space.

In an image from Meteosat, a suite of geostationary, meteorological satellites operated by the European Organisation for the Exploitation of Meteorological Satellites (EUMETSAT), you can see the planet spinning a few hours before the solstice arrived. The image shows Central Europe just before sunrise as Earth nears the solstice, which occurred at exactly 5:02 a.m. EST (1002 GMT).

Likewise, the National Oceanic and Atmospheric Administration's GOES East (GOES-16) satellite, which monitors Earth from space, captured the solstice. In this image, you can see Earth from space at exactly 5 a.m. EST (1000 GMT), a mere two minutes before the official winter solstice. 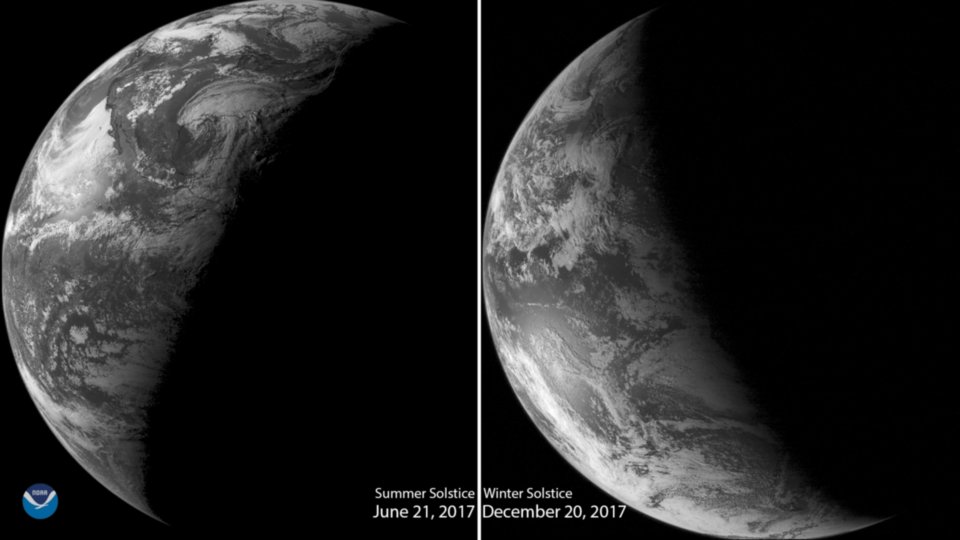 It's a year later and it happens every year, exactly the same way!