Tomorrow report day. I have been targeting 575 front month corn for awhile.

So I expect we sell the fact tomorrow. BUT.. if we close over 575 its a new game to upside targets

So far today I think you are 5 cents below your 5.75 target

Seems we are stronger today, although we may still have a sell the fact market

However, my gut tells me we are going higher after reports further indicate what I 1st posted way last summer. That being that china had suffered some major crop failure and possibly some stored grain also

When the Three Gorges Dam was in danger of failing, last yr., you can bet a lot of flooding had to happen to threaten the Dam

Sadly I sold most of my old crop as did a large number of other producers, but there is still some old crop slowly entering the market, as price goes up. At what stage will most of old crop be sold is just a guess

Here on our farm we have stopped selling, way  last spring  , waiting for the same target higher you posted.

It has been a long wait with no selling, the final production. If we do reach the target, at that time we joke it will be a race to the bottom before we sell

Sure dam close to 575 today. I say we made that target 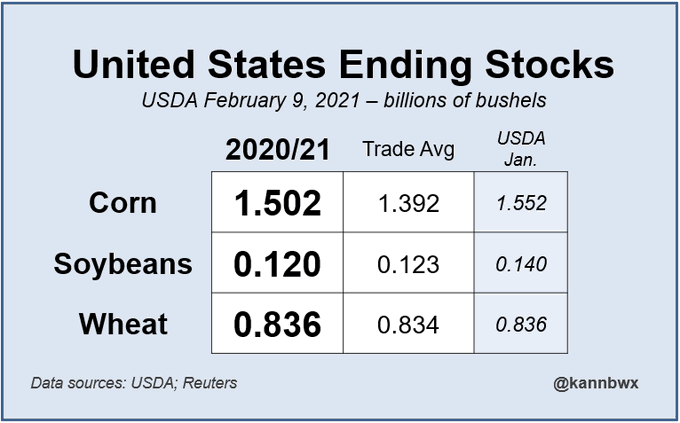 USDA holds production of #corn and #soybeans steady in South America against expectations for slight cuts. Export expectations out of both #Brazil and #Argentina were unchanged from January. 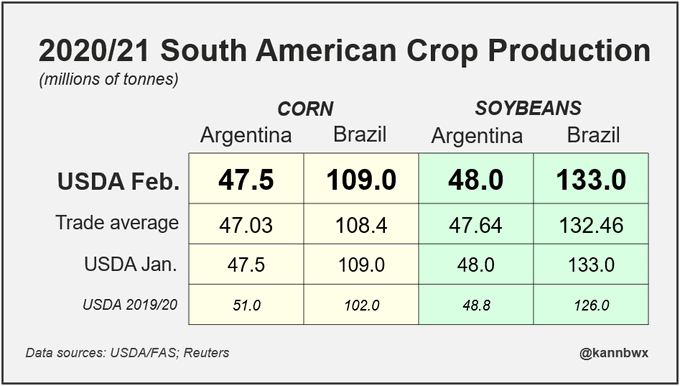 It's clear that USDA did not change its baseline assumption for #corn stocks in #China. Imports were raised by 6.5 mmt and total use was only increased by 2 mmt, and the leftover 4.5 mmt was shuffled into the ending stocks. Carryin and production were unchanged.

World #corn stocks ROSE from Jan. against expectations of a cut, that was largely on an increase in #China. Chinese corn imports went to 24 mmt from 17.5 mmt. #Soybeans were as expected but #wheat came in lower. Larger wheat cuts in China and #India. 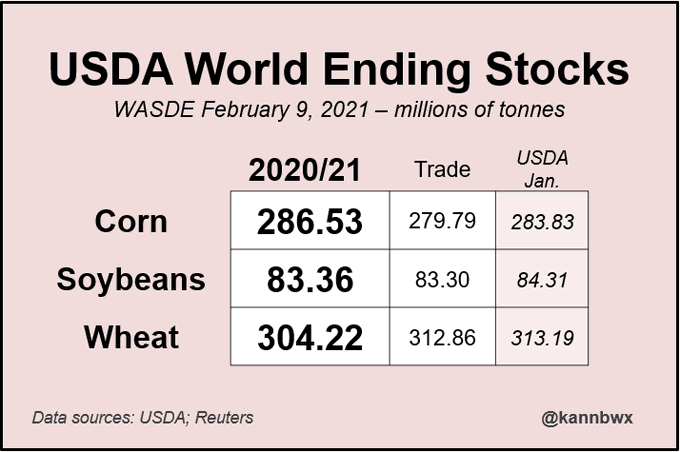 Anywho, time to sell beans?  Doesnt seem like enough fear to raise the price above it's current levels.  SA crop.is coming in and when I hear things like Brazil is getting too much rain, I am inclined to sell

It's sort of which will it be

China is said to have re-built it;s hog herd almost to former capacity

Other Asian countries the same with pork and chicken

However, Vietnam reports avian flue in some chicken farms, and culling 100,000. But 1000,000 culled out of a total of more than maybe 2  million birds is not much. I may have the total chicken numbers in Vietnam wrong but the ration is not far off. In china hog farms are still fighting the pork disease but it seems the battle is largely won and hog numbers are close to pre disease culling

Now some posters may say my numbers are fake news. That may be true in the sense I don't have exact numbers but  the overall numbers are close and I did not want to give anybody the impression I was spot on. Why I have to include this bit about fake news all because of one poster s a dang shame, as it takes up  space on my post

Any way, with china holding the majority of stocks and no idea if the stocks are physical or being used on a daily basis, thus requiring new purchases remains to be seen

My guess is china knows reasonably close what to expect from SA sources and yet they have bought considerable grain from the USA, the major holder of available grain stocks for sale, and after the rain began in SA

This tells me china suffered a major domestic crop failure and need to buy to replace lost domestic supplies, plus an increase in hog numbers or chickens in other parts of Asia, all add up to demand for grain. With domestic grain at double our price that seems like a very high demand for food, which won't go away any time soon.

Of coarse SA could build infastructure into more of the country and increase dramtically as they currently use a fraction of land which can grow grain crops, but that will take some time and money

I think old and new crop will be priced higher

My USDA sheet said they dropped Brazil crop to 126 mmt from Jan report of 133. Seems way to low from reports coming from harvest there.

Feb. remember is the insurance month. USDA sure did help corn drop to drop the avg. for the month. We did need a break off contract Highs too. Now we fight to get back to 550

There is old crop out there, in pretty deep pockets. Our next door neighbor for example. They go to Jackson Wy right after harvest and return in time for planting. He never moves corn until April, of course he does forward sell so I have no idea what price it will be delivered at.

All their bins are full, I manage them for them.

I am right at 3/4 sold, put everything on price later in December and started selling then. But it’s gone.