Back to Index Reply to Topic Like This Topic
Texas energy crisis/La Nina
7 responses | 0 likes
Started by metmike - Feb. 17, 2021, noon

Texas largely relies on natural gas for power. It wasn’t ready for the extreme cold.

Texas largely relies on natural gas — especially during times of high demand — to power the state. Experts say natural gas infrastructure, from pumping it out of the ground to the plants in city centers, was unprepared for the plunging temperatures brought by the winter storm.

The last time the state experienced a major freeze like this was a decade ago, in 2011. At that time, too, natural gas generation experienced difficulties — had ERCOT not reduced load through the rolling blackouts implemented during that storm, it would have resulted in widespread blackouts throughout the entire region, a federal report on the storm warned. 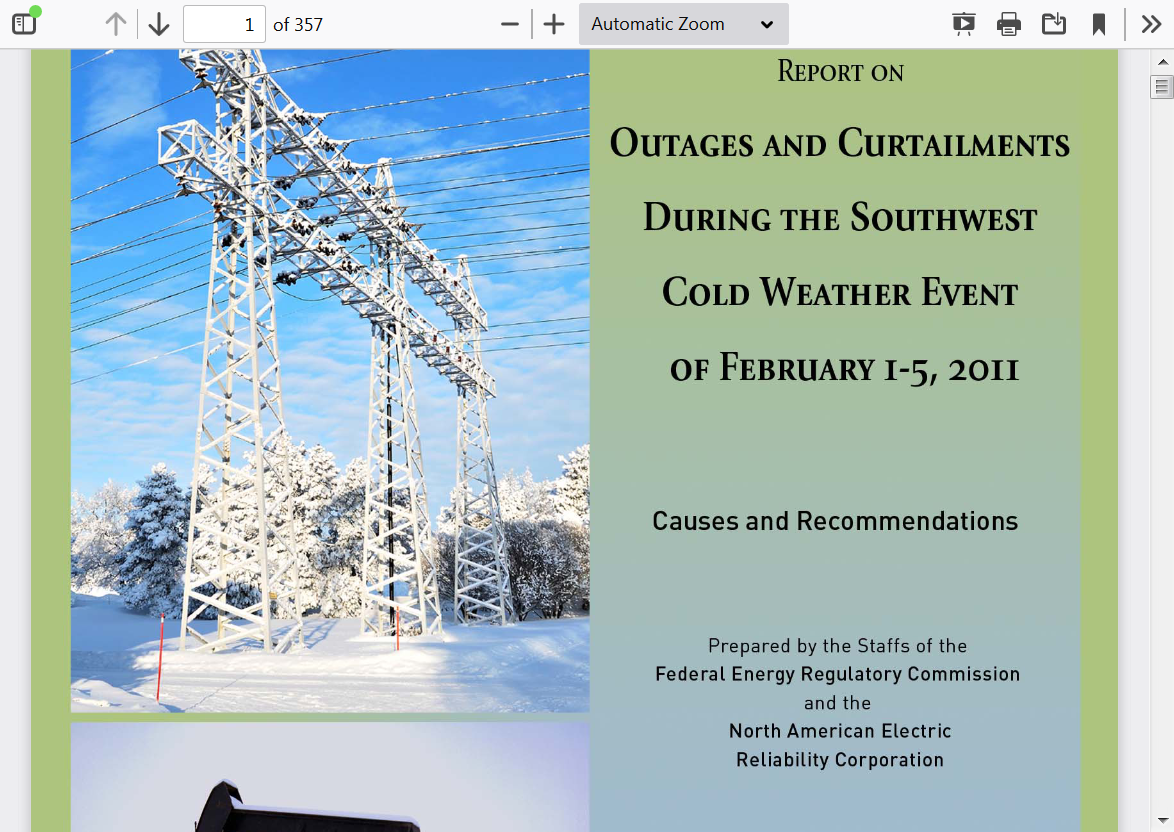 metmike: The report above is 357 pages long and I don't have the time to read it all but it appears like they did not follow the advice or take needed actions to winterize energy delivery systems.

Electric grid regulators said the U.S. will have to develop vast supplies of power storage — such as gigantic batteries — that rely on emerging technologies.

metmike: One would think that some of the statements they make about this is satire but they are actually serious. They want you to think that global warming caused this and the similar, extreme cold that happened in the past, 1960's/70's for instance that was colder than this..............really never happened before the climate crisis.

We live in a world where information sources just make stuff up with impunity and never need to show authentic data or facts to back it up.

Researching and reporting the
science and impacts of climate change 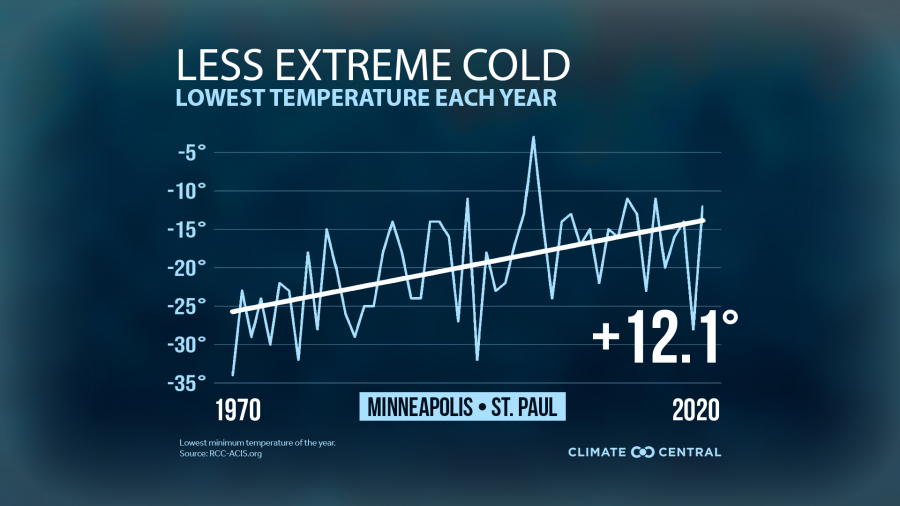 metmike: To prove how biased this source is, watch the spin they put on this benefit above by making a fake science graph below. Fact: Cold kills 15 times more people than heat.

Instead of showing that fact, ............they come up with a junk/fake science map, based on totally broken climate models(that are heating the planet at double the real/actual rate) to try to trick us into believing the current climate optimum is a climate crisis.

In other words, don't look at the benefits that are 100% happening in the real world right now from climate change based on authentic science above. Instead, use a broken climate model computer simulation for heat(that will never happen) absurdly, going out to the end of this century!

This is not authentic science. It's propaganda. 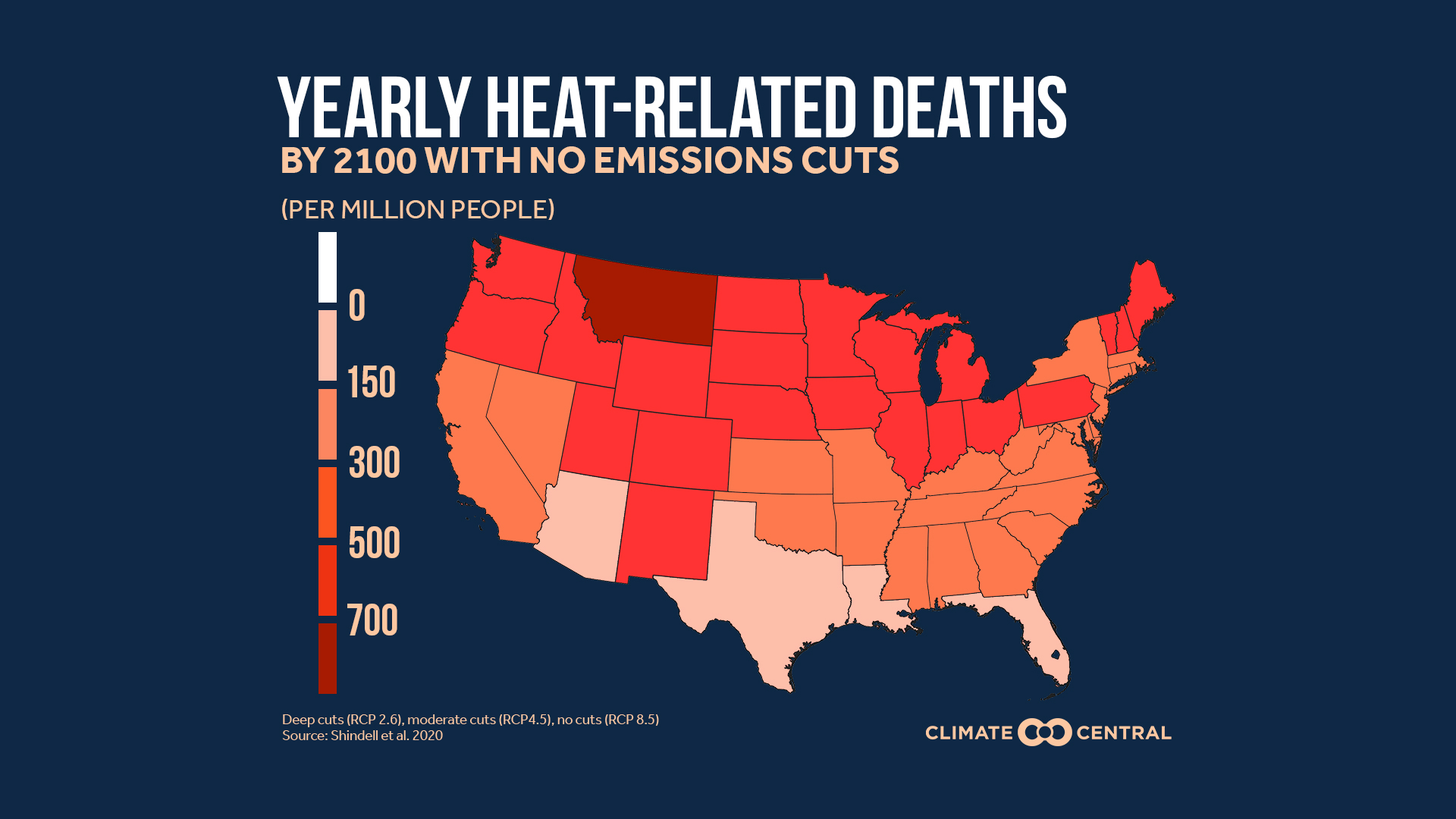 For those interested in authentic science, here's the latest monthly global temperature report from Dr. Spencer.

The NATURAL La Nina, that also caused the drought out West which led to the severity of the wildfire season is also a feature of global COOLING. So global  temperatures right now have very expectedly cooled off. 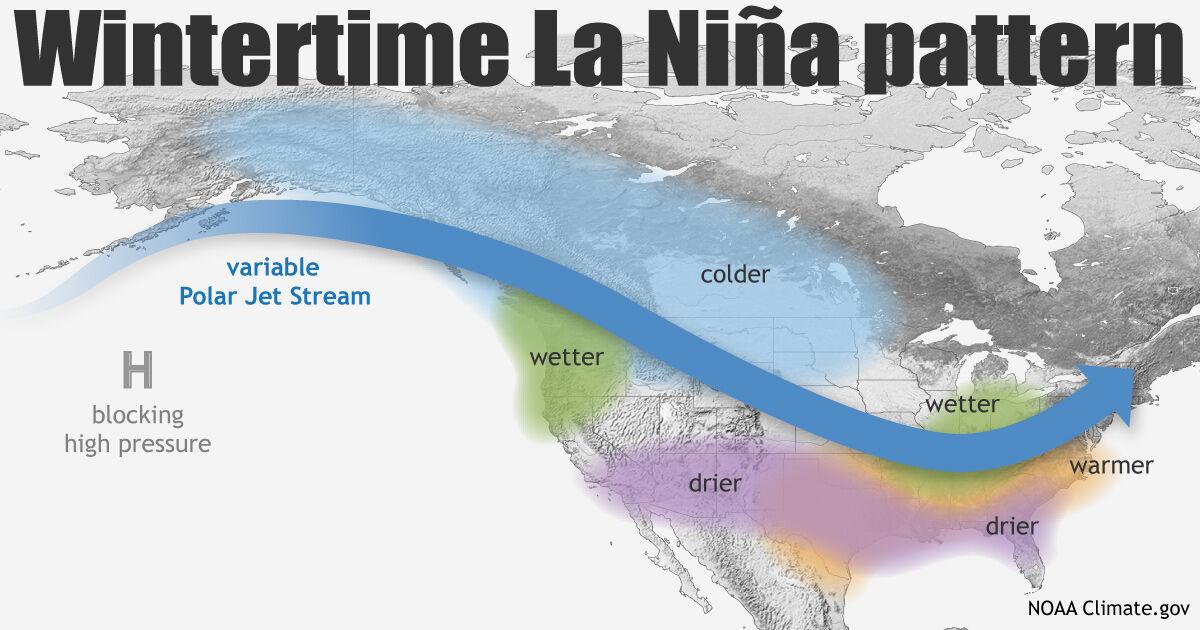 metmike: The US is in gray, north/northeast of the blue.

The cooler-than-average wedge of La Niña is clear in the tropical Pacific, amidst the sea of warmer-than-average we’ve come to expect as the globe warms. However, this La Niña is a bit asymmetric, with more blue to the south of the equator and less to the north than other La Niña events of similar magnitude, such as 2007 or 2010.

December 2020 sea surface temperature departure from the 1981-2010 average. The cool waters of La Niña are noticeable at the equator in the Pacific. Image from Data Snapshots on Climate.gov.

Also according to ERSSTv5, the three-month average anomaly (the Oceanic Niño Index) was -1.3°C in October–December. Most computer models predict that the Niño 3.4 sea surface temperature anomaly has reached its lowest value in our current La Niña event and will move back toward neutral from here. Forecasters estimate the most likely scenario for the end of this La Niña is a transition to neutral—a Niño 3.4 anomaly between -0.5° and 0.5°C—during the April–June period.

metmike: Chances of the La Nina lasting thru much of 2021 have increased the last few months. This increases chances of drought in the Plains, expanding across the Midwest and potentially bullish for grains during the growing season. 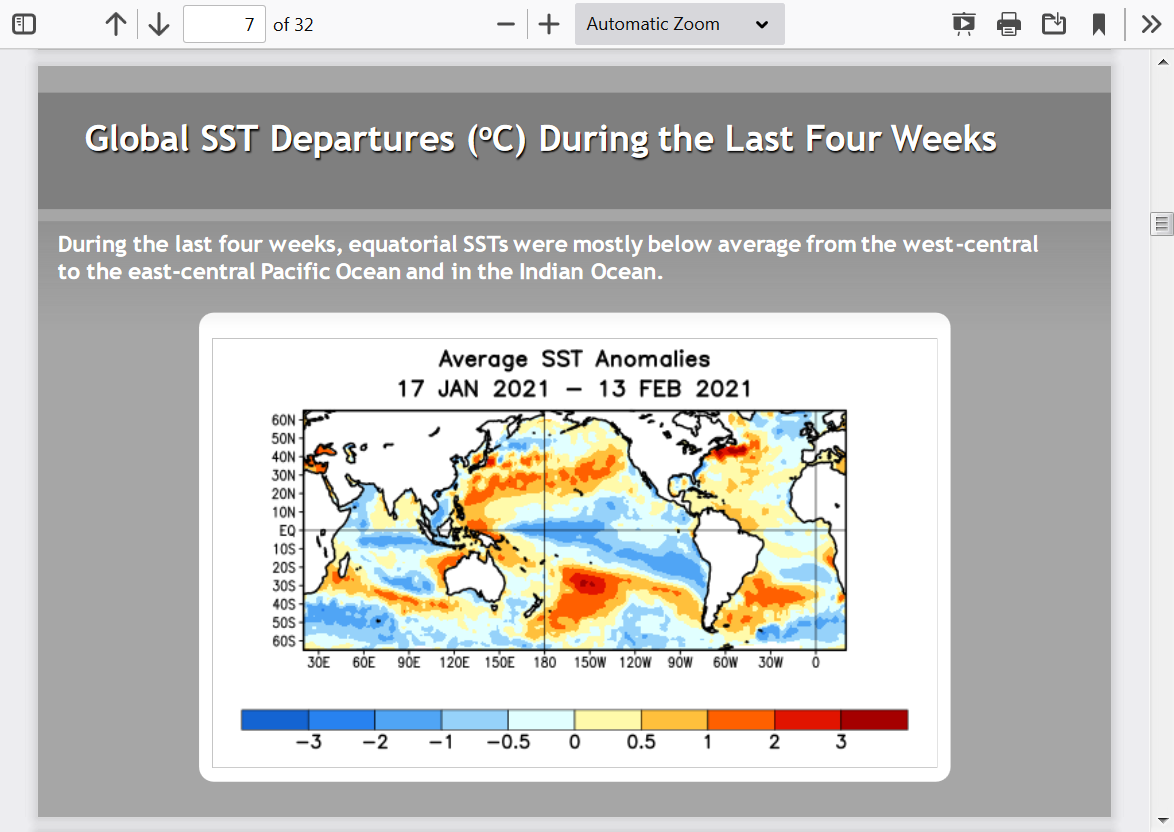 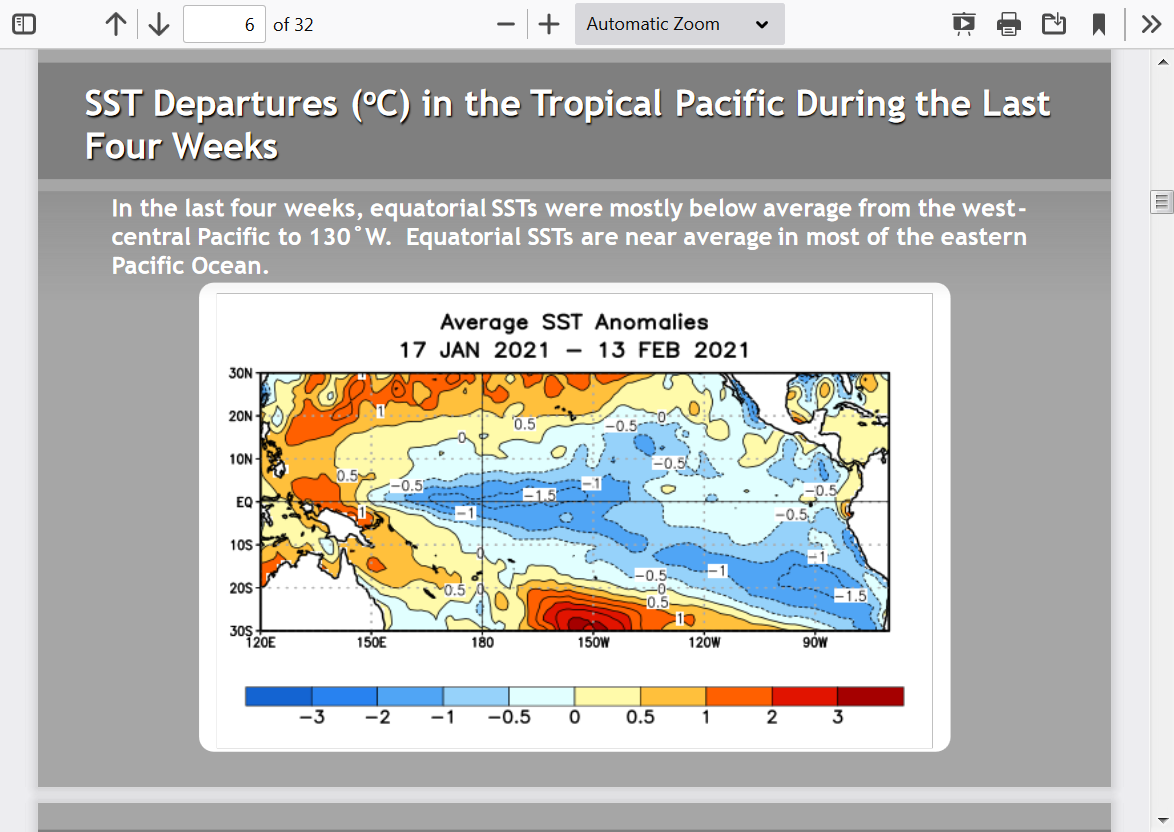 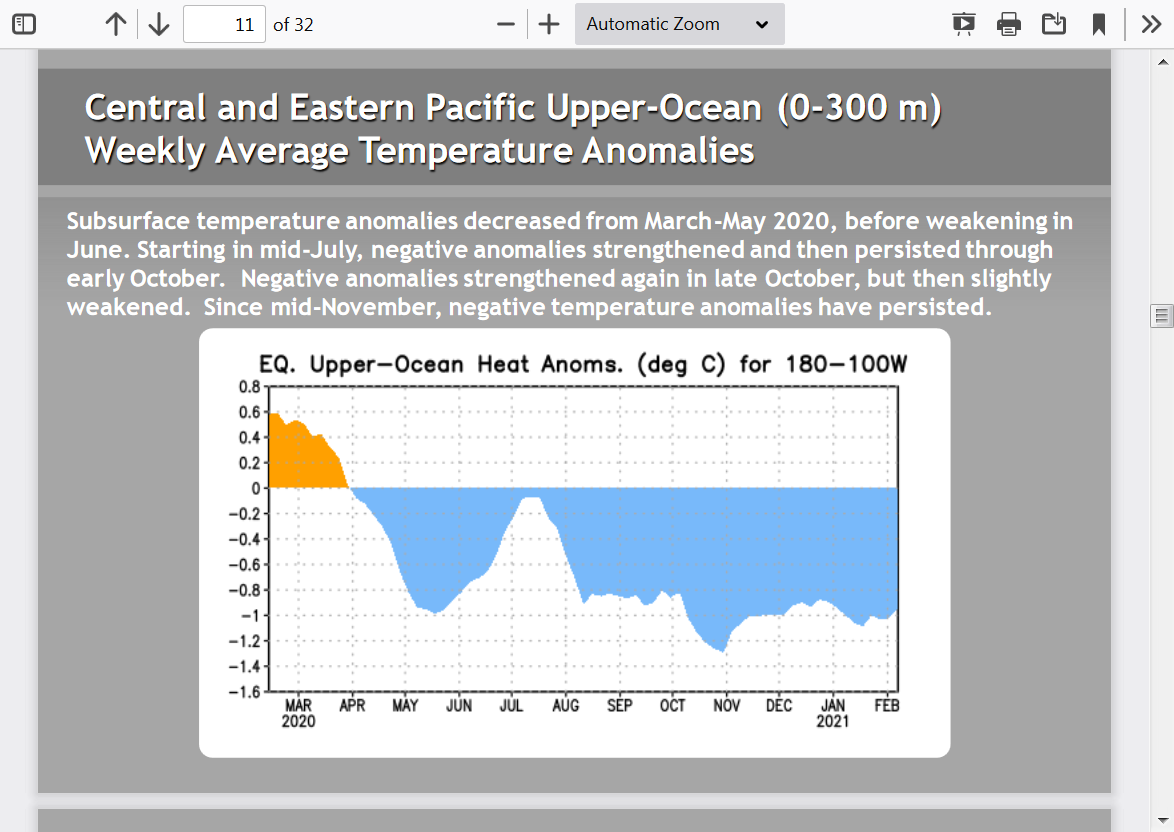 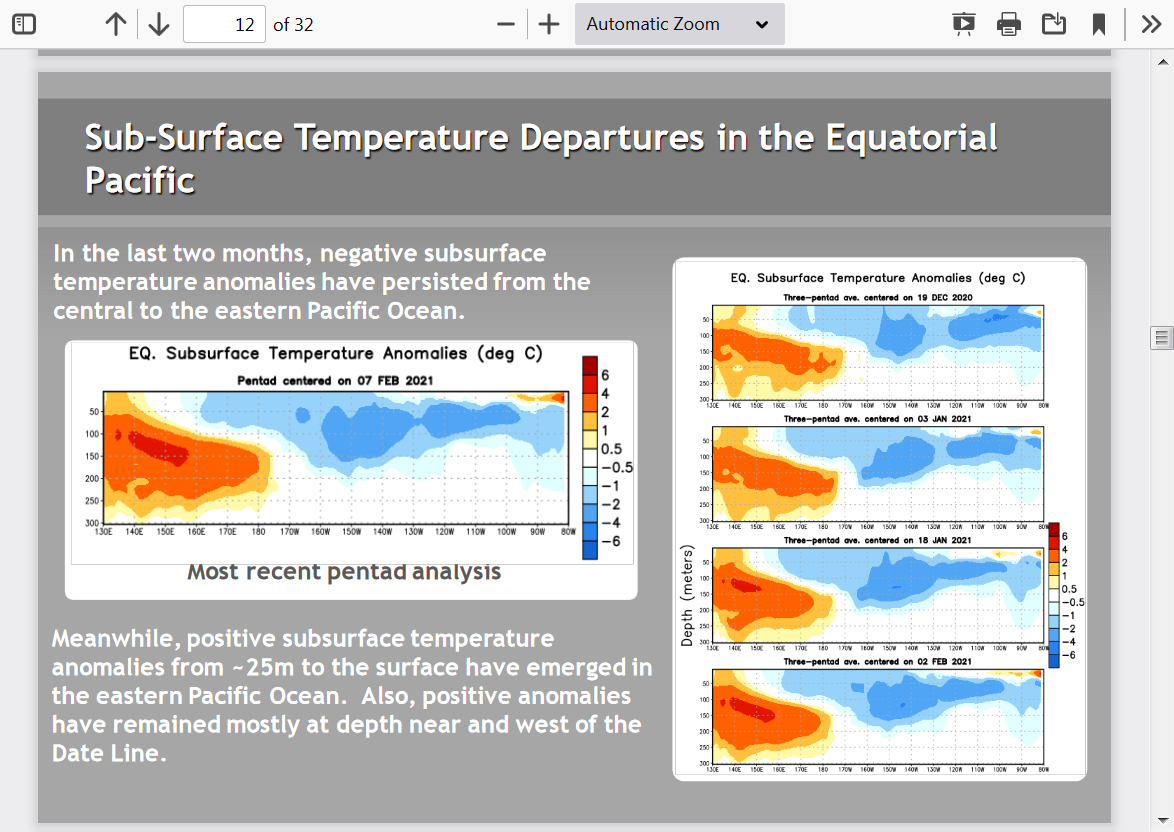 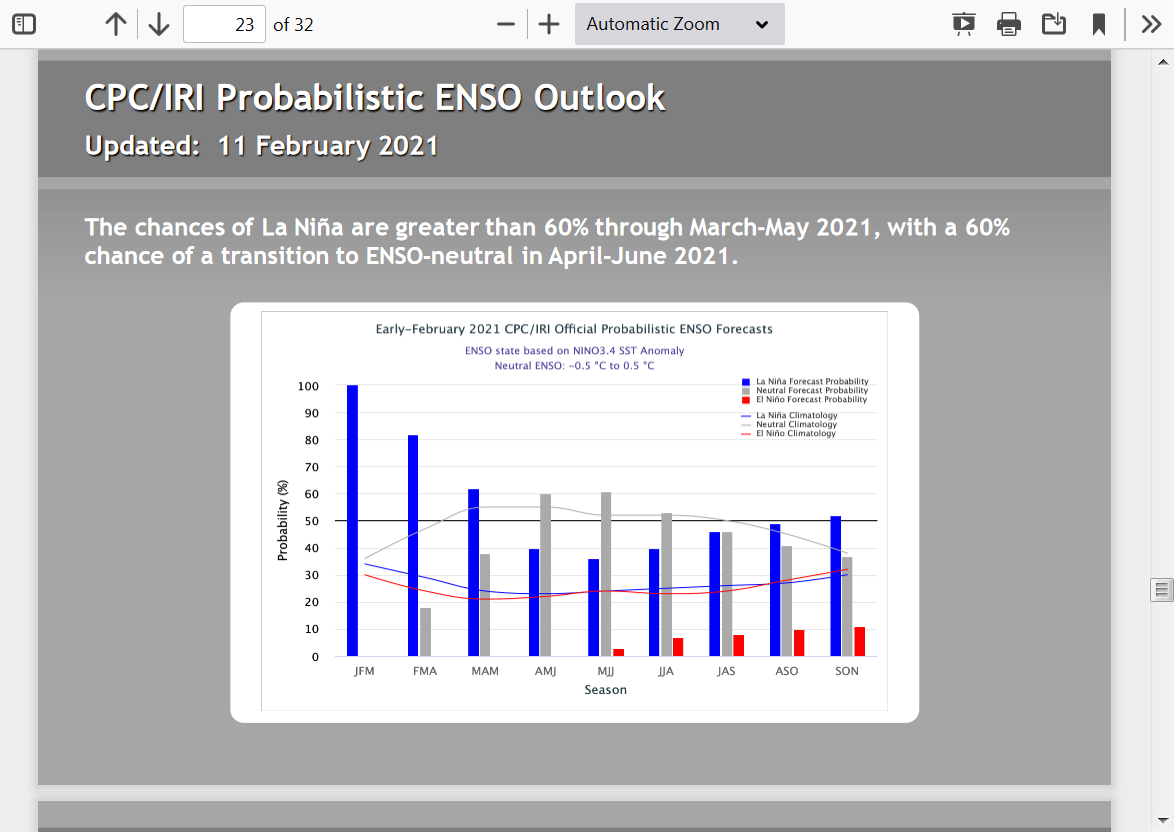 "But for all the differences between the events in Texas and California’s more limited rolling blackouts last year, there’s a common lesson: Extreme weather events are becoming more frequent and more severe as the climate crisis worsens. And the U.S. power grid is not prepared to handle the hotter heat storms, more frigid cold snaps and stronger hurricanes of a changing planet.

“It’s gonna be bad,” said Ed Hirs, an energy economist at the University of Houston.

Adding to the challenge, efforts to harden existing infrastructure against extreme weather won’t be enough.

Most of the country’s power comes from coal, oil and natural gas — the very fuels driving climate change. The grid of the future will need to be powered primarily by zero-carbon electricity sources, such as solar and wind — and rebuilding the grid from top to bottom, without further disrupting energy supplies, will be a delicate balancing act."

This is the 100% opposite of the truth. Like I said on another thread, news sources and politicians today just manufacture whatever science fiction they choose to support their agenda............never have legit facts to support it(otherwise, it would be legit) and push the propaganda with similar sources chiming in saying the same wrong things and using the same false narratives, so that readers/viewers think that it must be true."

The truth is, the most similar weather pattern to this current one was in January 1977.........towards the end of global COOLING.

Fossil fuels are cheap, abundant, reliable and dense vs solar and wind. Climate change is DECREASING our need for heating in the Winter.

We could be totally ready for the fake climate crisis using just fossil fuels but what our country is NOT READY FOR is switching entirely from fossil fuels to solar and wind.

Extreme cold yet a record high

There was a 130-degree spread in temperatures across the US yesterday, from 90 degrees in Florida to 40 below zero in Wisconsin and Minnesota.

And while hundreds of record lows are being set in the central US, Miami hit a record high heat index of 91 on Sunday.

metmike:  Note that they had to use heat index to exaggerate it, not regular temp....and this is what always happens with record cold. Someplace else is usually having record warmth...........it's almost always been that way.

More than one-third of the continental US area was below zero on Monday. Expand the measurement to areas with temperatures below freezing and that includes more than 79% of the country.

Wind chill warnings and advisories cover all or portions of 20 states from stretching from the Canadian border to Mexico, encompassing more than 68 million people.

The outbreak is bringing the coldest air in decades to many locations across the central United States:

A blanket of snow and ice

Winter storm watches, warnings or advisories are posted in at least 40 states and cover around 154 million people, roughly half the population of the country.

Snow fell as far south as Brownsville in the southernmost part of Texas, where measurable snow has only occurred twice since 1898, when statistics started being recorded.

Lake Charles, Louisiana, which saw two direct hits from hurricanes in the past six months, experienced thundersnow on Monday morning.

Oklahoma City and Dallas saw daily snowfalls -- 6 and 4 inches, respectively -- that reached the top 10 for both cities. Both could see another top 10 snowfall on Tuesday or Wednesday.

Abilene, Texas, reported a new record of daily snowfall with 14.8 inches of snow on Sunday, smashing the previous record of 9.3 inches from 1996.