Seems a new book has come out. Good luck finding it. It has inflamed the libs at Amazon and they have deleted it. Big deal you say. Well as Amazon now sells something like 83% of our books now, hell yes, big deal. And yet we have a few right here, including a former teacher. who approve and generally make light of this behavior by the left. They are a private company you say. That ship sailed long ago. Break them up if this what they want to do. Who could not see the indoctrination for what it is versus critical thinking ability and deciding for ourselves. Debate the issue, write  book in response, open a few minds to the cancel culture that is taking our nation. Better yet, protest your school unions that push this sort of thing and graduate such people that run  Amazon.

‘Some mid-level censor at Amazon appears to be conducting an experiment in what they can get away with,’ New York Times columnist Ross Douthat responded

Author Ryan T. Anderson said his book, "When Harry Became Sally: Responding to the Transgender Moment," has been removed from Amazon – and critics pointed out that the online retailer has a history of censoring books that don’t coincide with the company’s liberal political views.

"I hope you’ve already bought your copy, cause Amazon just removed my book "When Harry Became Sally: Responding to the Transgender Moment" from their cyber shelves.... my other four books are still available (for now)," Anderson tweeted.

"When Harry Became Sally," which has previously been on Amazon’s bestseller list, aimed to provide "thoughtful answers to questions arising from our transgender moment" and offered a "a balanced approach to public policy on gender identity, and a sober assessment of the human costs of getting human nature wrong." 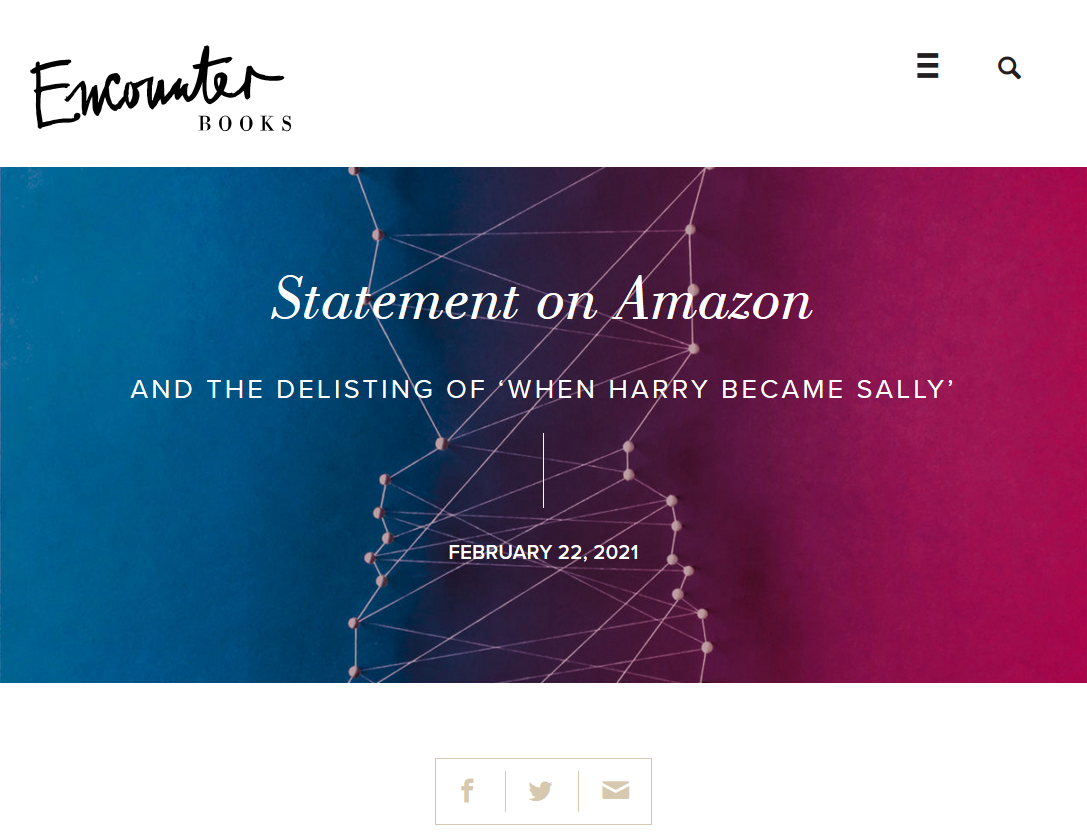 Yesterday, we learned that Ryan T. Anderson’s When Harry Became Sally: Responding to the Transgender Moment, which Encounter Books originally published in 2018, was removed without explanation from Amazon.com and from its subsidiary Audible.

Encounter Books is committed to publishing authors with differing views on a wide range of issues of public concern. We do this because a free society requires robust debate and spaces where dissenting opinions can be expressed unimpeded.

If Amazon, which controls most of the book sales in America, has decided to delist a book with which some of its functionaries disagree, that is an unconscionable assault on free speech. It will have a chilling effect on the publishing industry and the free circulation of ideas. It must not be left to stand unchallenged.

When Amazon Erased My Book

y book When Harry Became Sally: Responding to the Transgender Moment was released exactly three years ago. It was attacked twice on the New York Times op-ed page. The Washington Post ran a hit piece on it that was riddled with errors. It was obvious the critics hadn’t read the book. But they were threatened by it and wanted to discredit it lest anyone pick it up and learn from it.

Now, three years after publication, in the same week that the House of Representatives plans to ram through the Equality Act—a radical transgender bill amending the Civil Rights Act of 1964—Amazon has erased my book opposing gender ideology from its cyber shelves.

The people who did read the book discovered that it is an accurate and accessible presentation of the scientific, medical, philosophical, and legal debates surrounding the trans phenomenon. Yes, it advances an argument against transgender ideology from a viewpoint. But it doesn’t get any facts wrong, and it doesn’t engage in heated rhetoric.

But for a heretic-hunting Left, none of that matters. It’s not about how you say it, or how rigorously you argue it, or how charitably you present it. It’s about whether you affirm or dissent from the new orthodoxy of gender ideology.

Amazon never informed me or my publisher that it was removing my book. And Amazon’s representatives haven’t responded to our inquiries about it. Perhaps they’re citing a religious objection to selling my book? Or maybe they only sell books with which they agree? (If so, they have a lot of explaining to do about why they carry Adolf Hitler’s Mein Kampf.) If there’s a religious or speech objection, let’s hear it. But if it’s just an attempt to skew the conversation in the public square with an attempt to discredit one of the Equality Act’s most prominent critics, that’s a different matter.

So first, a caveat: If you fear what Big Tech can do if you dissent from gender ideology, just wait to see what Big Government will do if the so-called Equality Act becomes law. Second, a lesson: If you fear Big Government, don’t turn a blind eye to Big Tech. Conservatives need to get over the misguided belief that private businesses can do whatever they want. That isn’t true. And it’s never been the American law on the issue. Nor is it what the natural law supports.

In the natural law tradition, there is no single correct economic system. There are, however, certain systems—such as radically individualist philosophical libertarianism and radically collectivist socialism—that are incompatible with the flourishing of human beings and their communities. But between these extremes lie many permissible regimes of property and market relations. Decent governments create and structure various systems of ownership rights and obligations with an eye to what will best serve the common good of their societies, with their particular histories, traditions, and circumstances. Thus, government regulation of the market isn’t inherently wrong. If a particular instance of regulation is wrong, it will be wrong for some other, more specific reason, which has to be identified on a case-by-case basis.

No less a natural law thinker and teacher than Pope Leo XIII—who was clear that “private ownership must be held sacred and inviolable”—emphasized that property rights come with corresponding duties, and are thus not absolute or unlimited. As George Will once observed, “the most important four words in politics are: ‘up to a point.’” Property rights and economic freedom are important, up to a point—where they cease to serve human flourishing. All liberties have limits. So do market liberties.

This doesn’t mean that the government should step in every time a person or business exercises ownership rights in ways that harm the common good. A government willing to do that will ultimately do more harm than good. Still, some regulations are justified. We cannot rule out in advance the possibility that some regulation of Big Tech's power may be prudent.

I say “Big” Tech on purpose. No one would (or should) care if one brick-and-mortar shop decided over the weekend to no longer sell one of my books. The market would more than pick up the slack. But what would happen if all the booksellers in a locale got together and agreed to no longer carry the book? Or what would happen if one of the booksellers had, let’s say, an 83 percent market share of all book sales, and that seller memory-holed the book?

I was thinking.   Why don't a few of us get together and buy some books that we find offensive.  It doesn't really matter why we think they are offensive.  Subjective opinion is fine. And "offensive" is subjective,  right?   And we'll buy as many as we can..    Maybe we can even get others to contribute and buy even more.  And then we'll make a fire and burn them.  They're our books,  right?   How can anyone object to burning books that we bought,  right?

We'll get to the "witches" later.  How about if insread of calling them "witches",  we call them NAZIs?