Saw this article today, could you elaborate any ?

They talk mainly of the western states,  what about the corn belt ?

I just saw that article and was going to post and you beat me to it!

This is the new map prediction: 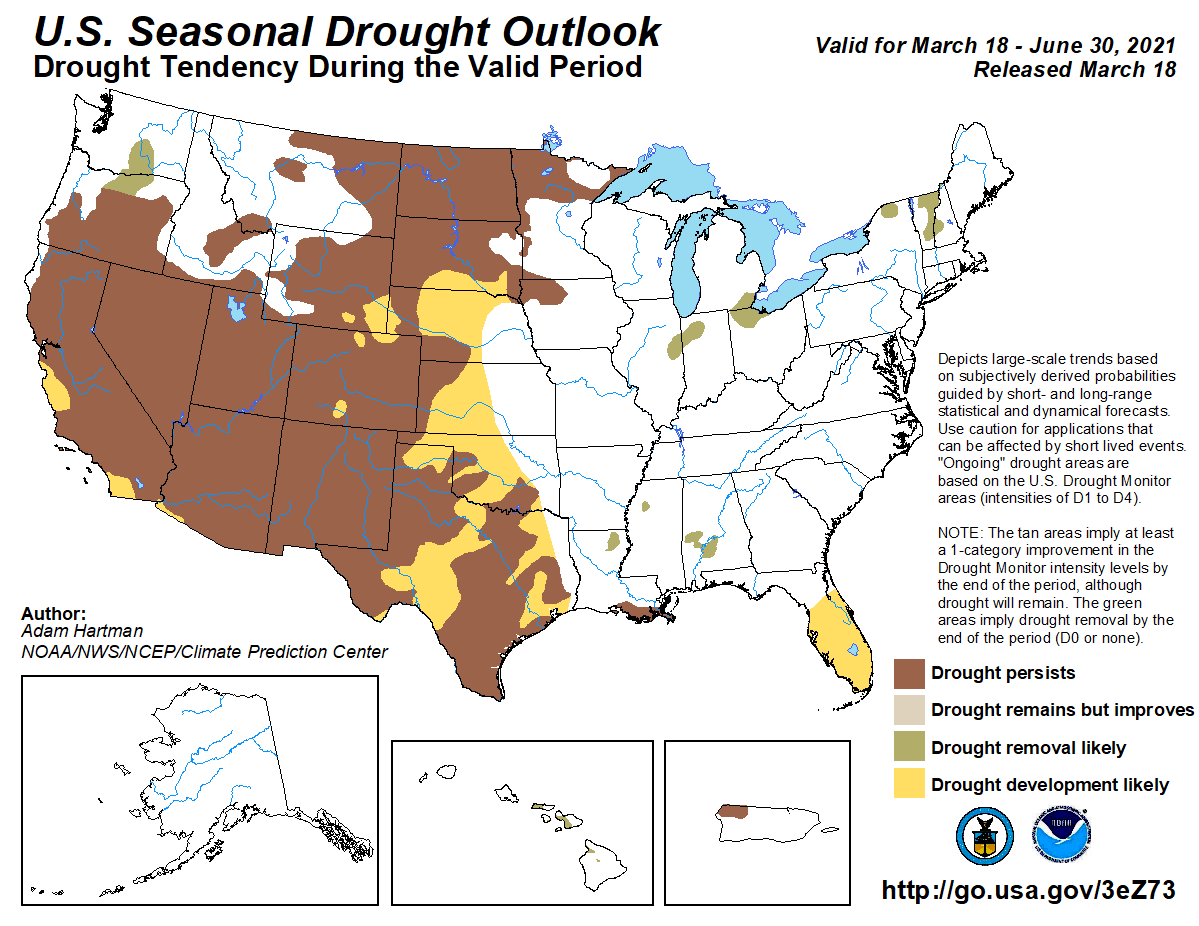 Guess where in Iowa I am.

Doesn't it figure.  Regardless, a lot of grain is grown on that side of the country and there is no way that doesn't trickle over to the east.

Here was my Summer weather outlook from early this month.

Please note the analog year of 2000, when at this time of year we had everybody shouting "drought" including NOAA with special warnings. The crop got planted in record time and the old saying "plant in the dust and the bins will bust" came true..............at least for that year, as the rains came big time in early May and continued for 2 months. It turned dry again in late Summer but 2 months of great rains on an early planted crop made it a big one.

Thanks for the previous summary, I missed it.

How is the arm Mike?

If you look hard enough at that map you will see a small spot of drought approx where Detroit Mich is located. We are 70 miles East of Detroit in Canada

Well: That drought spot is dead on. Every field we have is dry enough to drive a truck over and if the calendar was later we would be seeding full steam ahead. We will wait due to frost which would likely destroy emerged plants at a stage mature enough for the growing point to be above ground. So: I think that map is very accurate

We haven't even got the word from sweet corn people to plant under plastic, as when the plant gets tall enough we rip the plastic open and then you guessed it, frost would kill the field of sweet corn

Normal time to start is any time after April 15-20 with April 15 being a gamble on air temps and frost. Seems 5 days makes a world of difference

We went back and worked a wet  piece of ground that sweet corn re-claimed with piles of dirt from digging a pond yrs ago. Drove right through with a medium size tractor and small disk to level the ground for this yr seeding when calendar says it is time to go

End of Mar or April could be wet. Seems like things average out over time, but golly it sure is dry around here. Still have good sub soil for  root establishment but will need rain during growing season. Dust will fly and air filters will need extra attention as you won't see a thing and we expect an engine to work in those conditions.

Thanks for asking Jim!

Mainly because I disobeyed the doctor!

He said to keep it locked in a brace for 6 weeks and don't use it.

Turns out that I had 4 previous surgeries on this elbow for completely other things. The last one was done by one of the top  elbow surgeons in the world at the Indiana Hand Center.

Hill Hastings did a 5 hour reconstructive surgery back in 1995, that changed the arm from completely useless, to one that threw 150+ pitches of batting practice to my oldest sons baseball teams, 3 times a week for 10 years.

I used to be a pitcher with a wicked fastball as a youth playing baseball.

On the first visit to Dr. Hastings, after 3 previous surgeries, each that make my useless left elbow worse and worse, the first thing he said was "50% of my patients come here because previous surgeons made their condition worse"

He said the worst thing that you can do after surgery is completely immobilize the elbow/joint for many weeks.

When its time to return to motion, a ton of adhesion's have formed and other issues in my case.

So this surgery featured a nerve block under my arm pit, instead of being anesthetized. Afterwards, I was wheeled across the street in my bed and put in a hospital bed for 3 days, hooked up to t CPM(continual passive motion machine) for 3 days that moved the elbow thru the entire range of motion for 24 hours a day...........while the nerve block under my arm pit remained, so I felt no pain.

When the block was removed after 3 days.........holy cow, my elbow didn't hurt as much as it did before the surgery!

Then he sent me home, with the CPM machine to use as many hours a day as I could for 30 days.

I have an autoimmune disease and was a competitive powerlifer/body builder for over 15 years that tore it up.

So after this last surgery, instead of listening to this doctor, I used my doctor from 25 years ago's advice.

I took the brace off every day and did passive motion excercises and stretching from the day after the surgery. From day 1, I lost ZERO range of motion. That's unheard of with this surgery following conventional immobilizing protocol advice.

I was really nervous that it might cause the reattached tendon to pull off or be damaged, especially with my wife mad at me for disobeying the dr.

At the 2 week visit, the nurse was furious with me for coming with the brace not locked in place. At 4 weeks, the doctor seemed pissed off too, when I came without the brace.

He examined me quickly and told me to come back in 4 weeks. I said, "why no physical therapy?"  He said "you don't need it"

He gave me a cortisone shot in my right shoulder for another issue and was out of there in less than 5 minutes.

I been to the gym now a few times, increasing my strength training weights a bit.......to over 50% this next time(but still holding back to something like 10 lbs for my biceps and just doing mostly isometrics).

Most patients at this point are still working on getting back their range of motion and stretching. I never lost that but have to be careful to not let my life long mentality of pushing my body to the limit(that helped wreck it-with 19 surgeries-but I did bench press 345 lbs at a weight of 170 lbs)  doesn't re injure the distal bicep tendon repair.

Glad to hear you’re doing well.  I’m a big believer in movement and stretching.  I discovered yoga a couple years ago and it increased my range of motion while golfing and made it far more comfortable for my shoulders and hips.
That’s some impressive weight you’re pushing!  Good for you!

Jebus, good to hear you are doing well.

I'm recovering from gall bladder surgery, but nothing like all that.

Glad to hear your recovering too mcfarmer!

That was my bench press 40 years ago, when I was (over) training with extreme intensity and tearing up my body.

My shoulders, especially the right one are shot (all my rotator cuff tendens have severe tendonosis) and I had to give up doing any bench presses years ago.

I have some sort of disease, that some doctors think is like ankylosingspondylitis that almost killed my 30 years ago. I went from that impressive bench press mentioned earlier(345 lbs) to several years later, having to buy a self propelled lawn mower because I could not push a regular lawn mower because of my elbows and shoulders were extremely inflamed and it was painful to do anything.

Steroids saved my life in 1994. Without them I would have been dead more than 2 decades ago.

I cherish every dang day, not just because of that but because I probably don't have that many left......but you never know. I'm doing alot of really good things to heal and nurture my damaged body.

One of them that has made a huge different is taking huge doses of Omega's especially the 3's. Genetic testing showed that my body is unable to make or process them well.

Tons of glucosamine(with chondroiten sulfate) or another sulfur compound and also hyaluronic acid.

I take several other supplements but mention those specifically for helping my severely eroded cartilage and the HA makes up 50% of the synovial fluid that lubricates your joints and people with bad arthritis are extremely low on it.

I should move these posts to NTR.

Your affliction sounds like what happened to Rich Piana a couple years ago.  I watched an interview with him and he was talking about all the drugs he was taking because all his joints were shot from all the weight and reps.  A couple weeks later he was dead.

I think I speak for all of us that read your posts and weather forecasts and opinions, we are glad that didn't happen to you and you are here.  There, I made it trade related.  :)

thanks Jim!
The steroids I was referring to BTW, are these. They do have numerous side affects.

Prednisone and other corticosteroids