I don't quite know how this info translates into a trade recommendation, but this incident will effect the world economy, they say

Any other year, this would have sent crude screaming.  Supposedly 1 mbbls a day from Saudi headed to our shores comes through the Canal every day.

This is huge news Gunter!

The DL Marigold is among the ships waiting to pass. It was loaded in Romania and is carrying corn, barley, sunflower meal and rapeseed meal to Reunion Island. Unsure if that is its final destination. 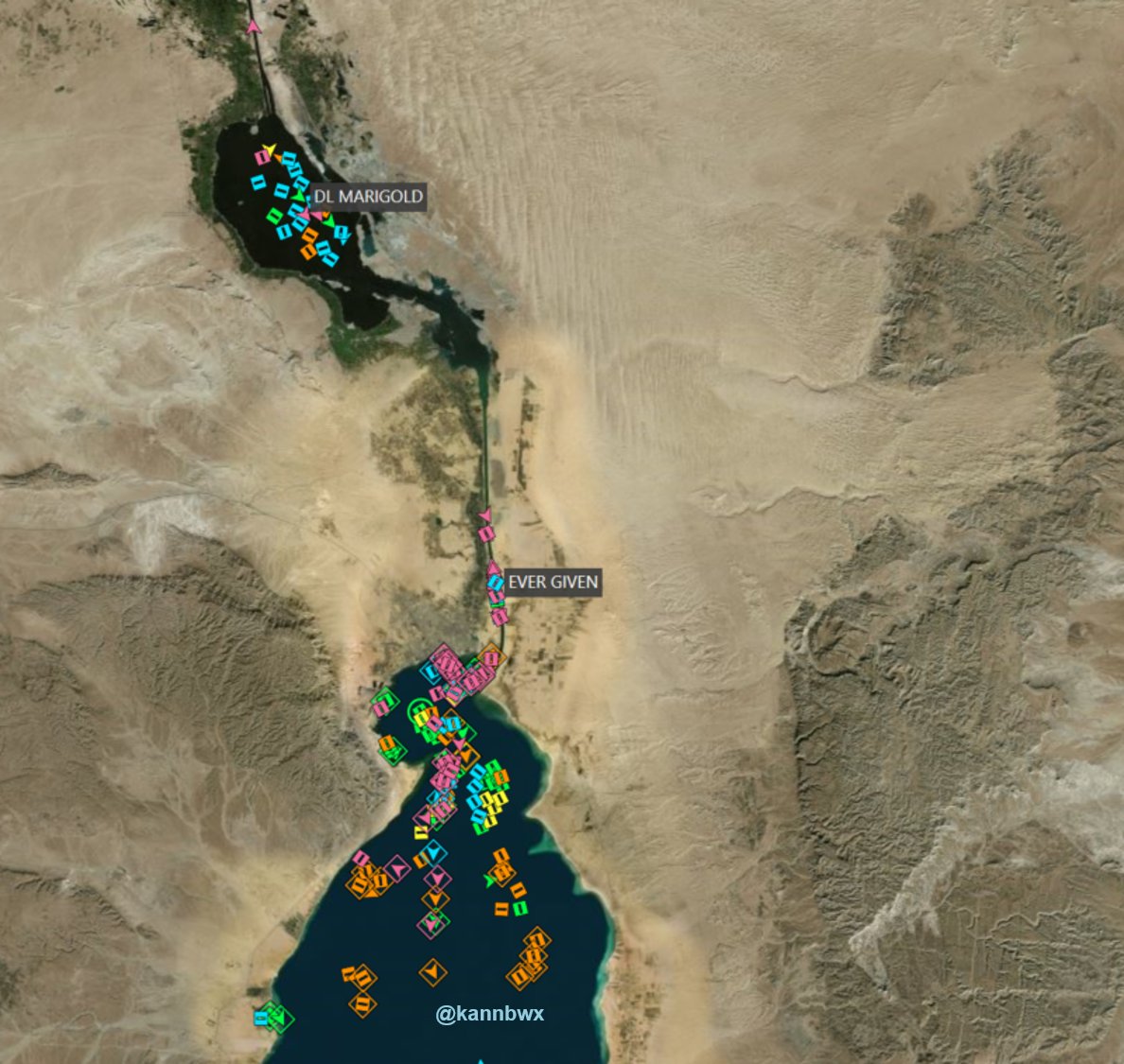 The Ever Given remains lodged in the Suez Canal and tug boats are still working to free the massive container ship, but traffic is piling up. Oil prices jumped about 6% on Wednesday due to fears over delayed crude shipments. The incident was caused by a dust storm early Tuesday

Here's some of the agriculture ships involved that I can find, though its very minimal compared with the 156 container ships, tankers and other vessels backed up waiting to pass. Included in the jam is a total of 100,000 tonnes of French feed barley heading to #China. 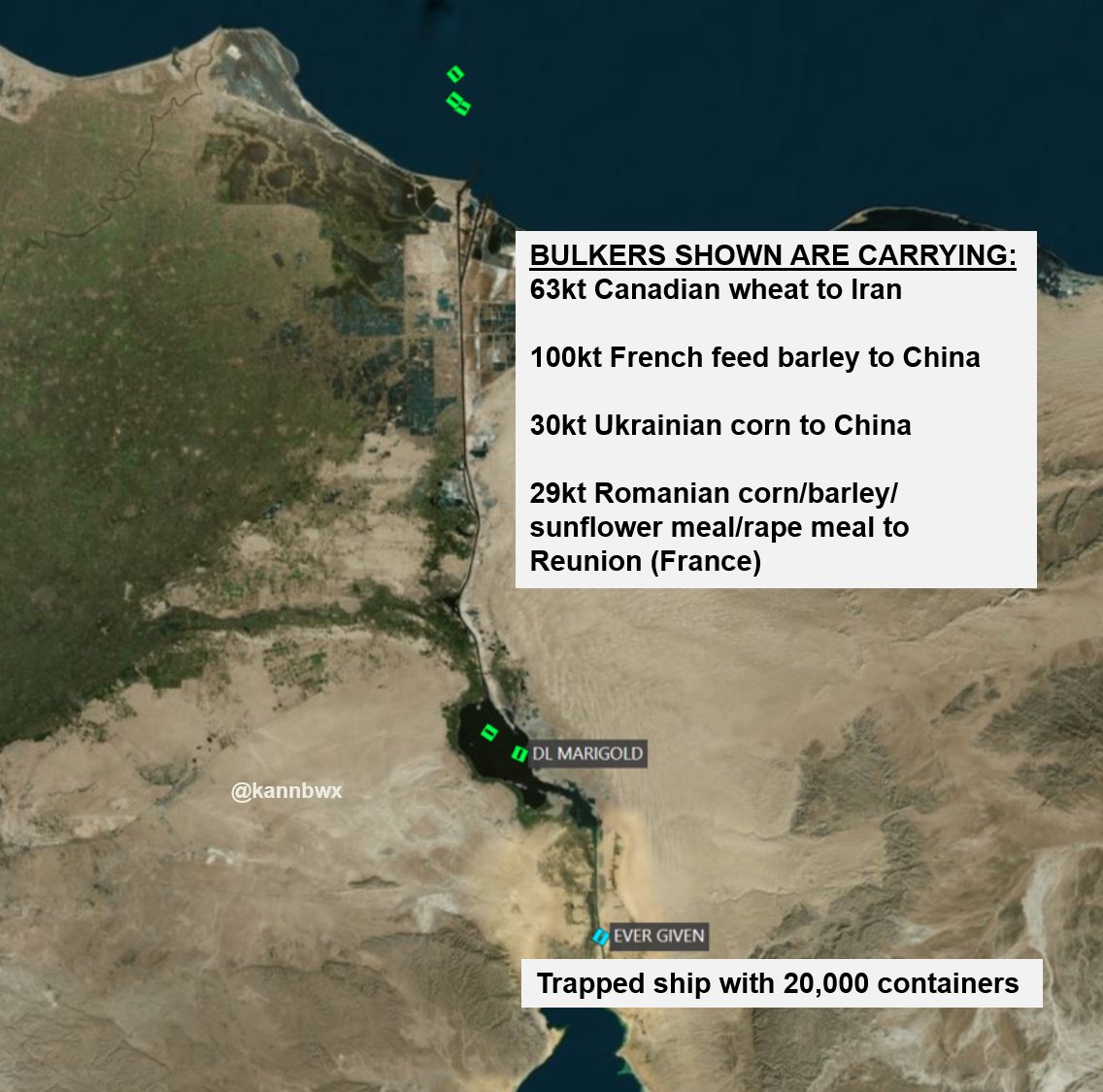 what about this talk of the ownership and the possibility of a purposeful versus accidental block?  Any truth to that?

What do you know?

I had read it got beached because it lost power and couldn't maneuver.  But this is turning into a real cluster.  Going around Africa adds 7-10 days and that is if it isn't inside that log jam.  If they moved that ship tonight, it could take 2 weeks just to catch up.  If it takes a week or longer to move it, crude could get real interesting. 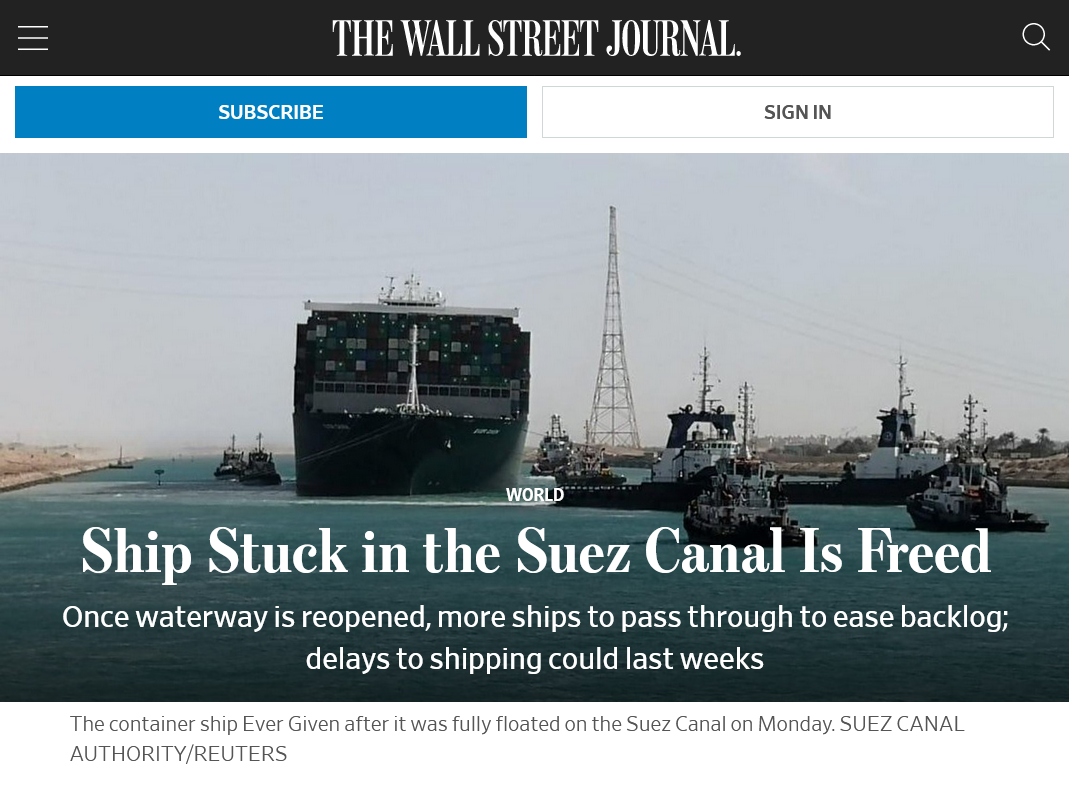 ISMAILIA, Egypt—The vast container ship that blocked the Suez Canal for six days has been freed and is moving north to an anchor point, opening the critical waterway, as hopes grow that global supply delays will begin to ease.

Engineers raced throughout Monday to finish the job of dislodging the Ever Given after partially refloating the ship at dawn, taking advantage of an unusually high tide to make the job easier.

Tugboats helped pull the vessel out from the side of the canal where it had been stuck, before straightening its heading. Egyptian television images showed tugboats blaring their horns, as they towed the Ever Given to safety. Once stabilized it was towed toward an anchor point at a lake further up the canal system, enabling ships already in the canal network to travel.

In the evening, Osama Rabie, chairman of the Ismailia-based Suez Canal Authority, which runs the 120-mile shipping route, said it had been opened to hundreds of vessels that had been waiting to traverse.

Mr. Rabie said that clearing the backlog would take roughly three days, though some shipping industry veterans suggested it could be longer.

After several days trying to dislodge the Ever Given cargo ship, which had veered off course and embedded itself in the side of the canal, the salvage team pinned their hopes on this week’s full moon, when, beginning Sunday, water levels were set to rise a foot-and-a-half higher than normal high tides. That would make it easier to pull the 1,300-foot vessel out from the side of the canal without unloading a large number of the 18,000 or so containers it was carrying.

The engineers would have to work fast to make the most of this narrow window. The effect would only last a few days. But it would be their best shot at freeing up the canal—and with it, billions of dollars’ worth of global trade flows in the process.

Tides are higher whenever there is a full or new moon, which occurs when the moon is in direct alignment with the sun, with either the Earth or moon in the middle of the three. This causes a greater gravitational pull on the Earth. As a result, high tides are higher, and low tides are lower. They are known as spring tides and occur twice a month.

More on the moon here:

The Ever Given has been refloated, but the queue of traffic waiting to pass through the Suez Canal is heavy. Ships should be able to start moving again on Monday. Some traffic had already been rerouted around the Cape of Good Hope (South Africa), adding up to 2 weeks to the trip. 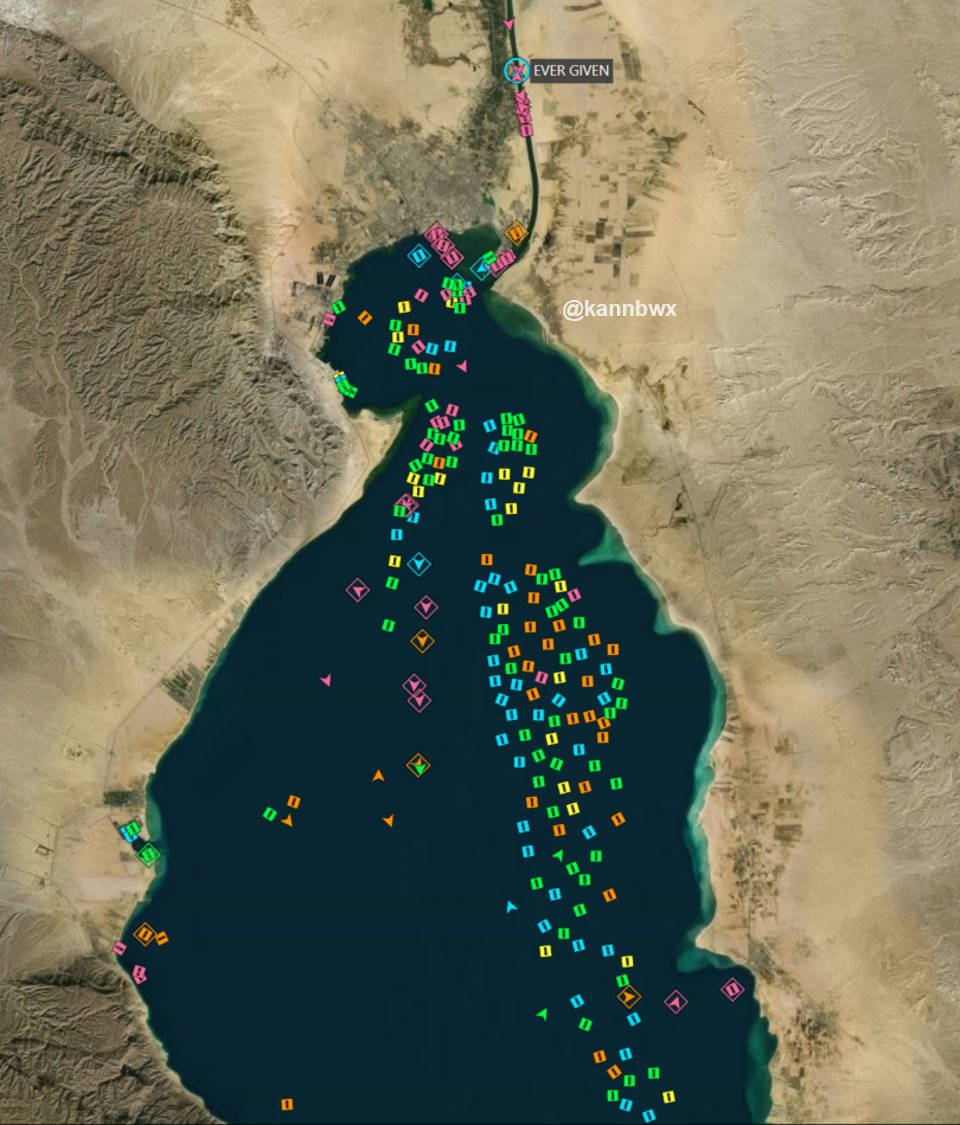 The live pictures panning the water over all those ships is an incredible sight.  We need to give thanks to the internet more often to giving up all this information at a moments notice.  When I was in school, you had to fight other students to get what books you could to do a book report on the Suez Canal (and the Panama Canal) and the whisper of information back then compared to now, is incredible.

The technology is incredible.

Kids today take it totally for granted. Nothing against them..........why wouldn't they? It's all they've known.

My 95+ year old Dad is one of the few survivors from a time that dates to BEFORE things were so easy. Of course he was also from the inner city of Detroit and never knew his Dad so it was pretty rough.

But he never complained in his life....ever and has fond memories of growing up.

Likely related to this: