This may be a bit unnerving for the small trader. Quite the potential for enormous swings due to the outsized influence of the managed funds and algorithm/hedge traders. Black ice, indeed. I’m wondering how the brokerage firms are gonna treat margin requirements. I’m with TD Ameritrade currently, and they are a non-futures friendly outfit. Low commissions, tho. Will be/am looking to go elsewhere when I get motivated to research to a good switch.  Any recommendations?

I don't know that this will be a problem for the small trader, as long as you correctly predict the direction that the market is moving.

Increased limits are actually a good thing. That last thing that you want is to be stuck with a lock limit up or down market.

As it turns out, increased limits, although they could push the daily ranges up a bit, they might decrease the peaks and troughs of short term spikes.

If corn is lock limit up for instance during the last 2 hours of day trading,  you will have a massive number of buy orders at the limit price  that can't be filled because there are not enough sell orders at that price.

This causes sort of panic type buying mentality/psychology  of people that are short that want out because they are under water and can't offset.

This results in pent up buying, that builds as the market stays locked limit up. When the market reopens, it almost always gaps higher, sometimes much higher as traders  must be more aggressive with their buy orders to get filled.

For example. Let's say that CN was locked at limit up at $6.50 and we accumulate/build up 50,000 buy orders at the market during the last 2 hours that don't get filled.

When we reopen in the evening. Any of them trying to buy then, will have to bid up the price maybe, another 5C, maybe 10c if the market is extremely bullish. The buy orders for sure will be lopsided enough so that finding enough sellers to satiate that, will require some higher prices.  Sellers, may also my hesitant to sell after a limit up move too.

When the market goes above $6.50 +25c, traders will not be in panic mode and you will likely encounter tons of willing sellers at $6.51, 6.52, 6.53 and upwards to satiate all the demand that would have been pent up at $6.50 and locked limit, without having to suddenly start 5-10c higher during the night session to satiate that demand(and you never have 6.51 or 6.52 or 6.53 during the day session to do it.

I hope that makes sense.

Also, when the demand/buying is satiated in the day session, at 6.55, with the 40c limit..........(let's say for hypothetical example), then the sellers will feel more comfortable stepping in to sell and since you've exhausted the buying at 6.55, the price is more likely to drop from there with any amount of selling, since many traders that wanted to buy at 6.51, already did it.

If the limit is 25c still, traders that wanted to buy at 6.50 or a few cents higher...are locked out from buying completely.

The satiation of buyers (with matching sellers) will usually be delayed and also  occur at a higher price under those dynamics of the lower limit.

As you mentioned, funds have taken over total control of market prices, especially during short periods of times.

For sure, you have noticed their control, starting at 8:30 am every morning during volatile times.

Many of them wait until then to place their large orders and very often, they all have the same idea and the market will take off within minutes of 8:30am. There was no fundamental news hitting right then(it likely evolved overnight or since the previous close) but many of them, suddenly want to trade on that news at 8:30 am.....they wait until then.

And its not always clear or easy to predict.

There are many times when the overnight session was up 3c for instance(corn) and the day session will open up 4c, then sell off to +2c and make it appear that the funds are going to SELL the overnight strength(which happens frequently too) and if you bought the open, you are suddenly behind a penny......THEN the price goes up like a rocket and 30 minutes later, corn is +9c(hypothetical).

Entirely based on what the big funds have decided to do.

Sometimes, it would appear as if they are all colluding with each other.....like  herd mentality. They all want to do the same thing.

If you miscalculate what they want to do that day..............you get run over. Not because you are a small trader.............a big fund doing the opposite of the other big funds is going to get run over too but because the vast majority of the big speculative money is often keying on the same things at the same time and this results in them doing the same thing in the markets.

And this feeds on itself at times............positive reinforcement. If they know the other funds are doing the same thing, they will be more aggressive doing it. It also sets off positive or negative technical/momentum trading signals.

When moving averages or other indicators many of them use, are violated or confirmed many of them see it at the same time.

CHICAGO, April 22 (Reuters) - Daily price limits for Chicago Board of Trade grain and soy futures will expand in May following a routine half-yearly review, CME Group Inc, parent of the exchange, said on Thursday.

The new limits go into effect on May 2, for trades dated May 3, CME Group said, potentially increasing volatility.

CBOT corn, soybean and wheat futures have been trading at the highest prices in nearly a decade, buoyed by tightening global grain supplies.

For soybeans, the daily limit will widen to $1 per bushel, from 70 cents currently. The limit for soymeal futures will expand to $30 per short ton, from $25, and the soyoil limit will rise to 3.5 cents per pound, from 2.5 cents.

Daily limits will widen for oats, rough rice and other CBOT grain futures contracts, as well as lumber futures.

CME Group resets daily limits for grains and oilseeds in May and November of each year.

Margins on corn and beans have been or are about to be increased. Not sure what those are right now.

Yes, the concept of price movement limits was initiated to protect the small farmers and traders from extraordinary price moves. But now the small traders are all but gone and the dollar volume the aforementioned players is such that it’s gonna take some extreme diligence to survive and thrive. They can easily overwhelm most if not all the markets. Look at crude’s move in 2008 for example. I like to utilize options to backstop my trades. TD Amer does not allow livestock option participation. Crimeny!

As I mentioned, I think that limits actually create even more exposure.

Longs and shorts are trapped when the market is locked limit down or up, then the gap lower or higher on the re open, causes a price area of X cents that never trades.

An exit strategy to limit losses can be sabotaged.

The markets were all originally created for producers and commercials to conduct business, so they can lock in (future) prices that are favorable to their business.

Speculators, in the past helped to provide the liquidity by providing the volume with tons of orders at different prices that would not exist without them.

Then the huge speculators/funds got so huge that their trading was much greater than everybody else that is actually dealing with the products.

So the demand/supply fundamentals, though still traded by the commercials and producers can be a 2nd thought if the funds see something more compelling or focus on certain elements.

They have massive research and massive, collective power that can overwhelm/run over any trading entities that see things differently. ...including other funds that have a different opinion.

They can use short term, day trading algorithms that might all key on a few elements. on any particular day.  I am not real familiar with this though.

Somebody asked what current limits are

Corn could use those new limits today!

CBOT December #corn futures have risen nearly 21% since March 1 when USDA started surveying U.S. farmers' planting intentions. Look how much that sticks out versus the prior 31 years. 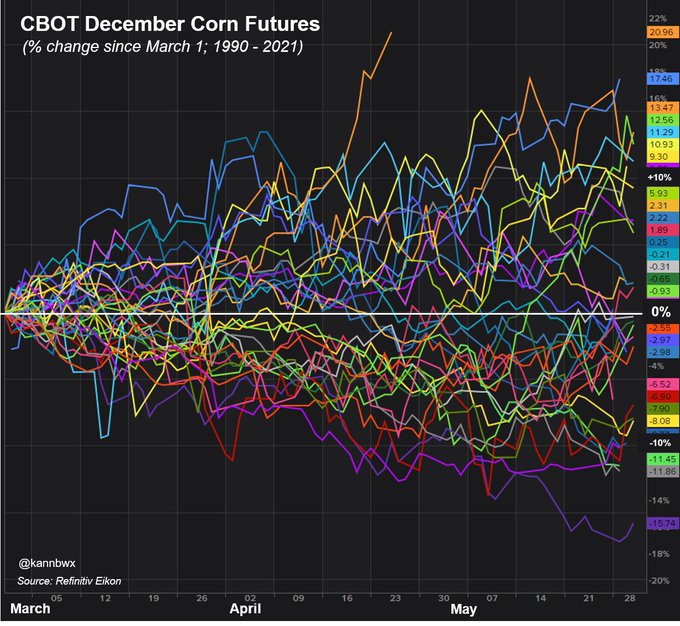 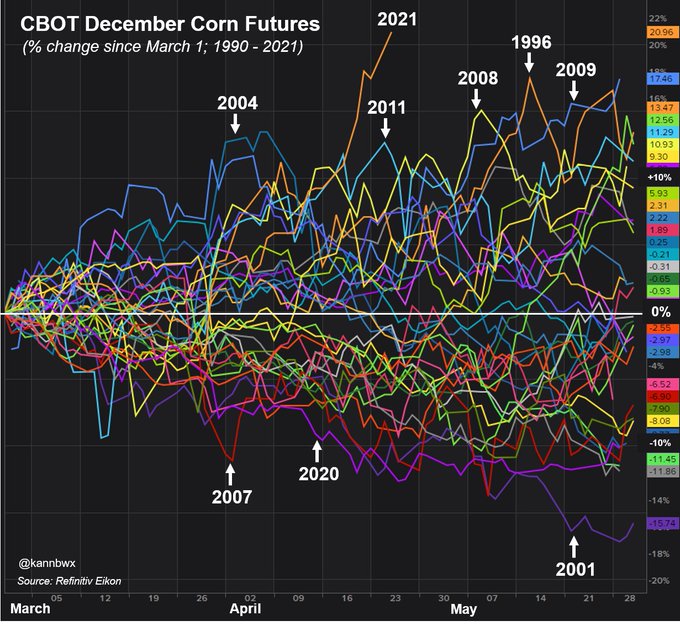