#wheattour21 found record yield potential for winter #wheat in Kansas, USA this week, but the protein content might be disappointing. This to-scale chart shows number of stops (record low in 2021) vs. tour yield (record high in 2021 - 58.1 bpa). Prior high was 49.1 in 2012. 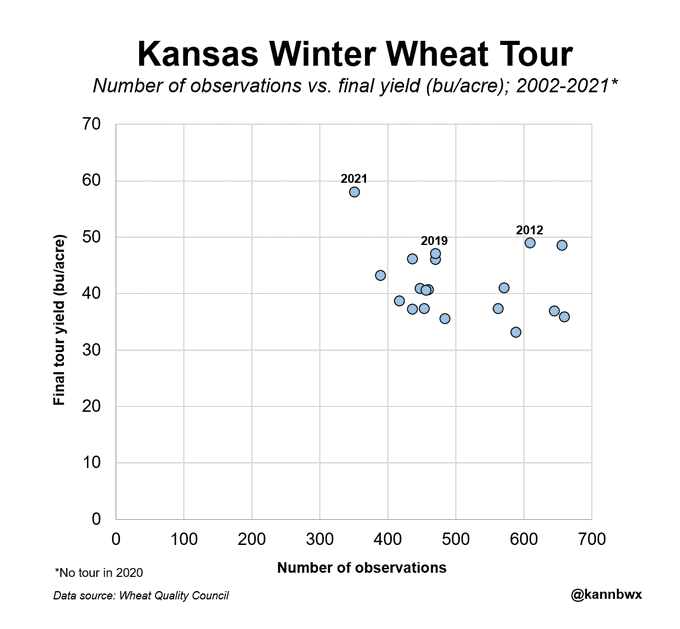 This is a more zoomed in view of the chart with more years labeled. Not sure why such a low number of observations this year - perhaps having to do with covid restrictions? 2015 and 2016 were the busiest years for scouts. Wonder if low obs influenced average - not sure. 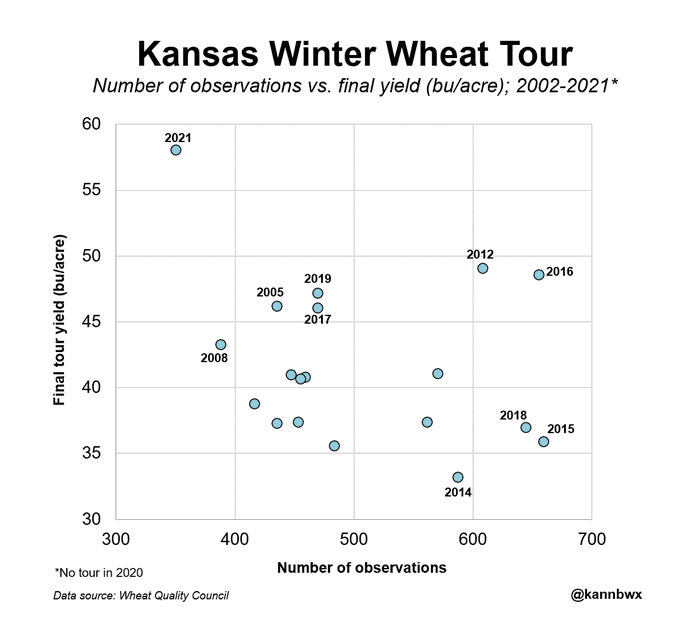 Not sure why this is such a big shocker.

And the extra CO2 continues to be wonderful atmospheric fertilizer to boost growth of  crops.

Crop condition. Spring wheat at 45% must be the worst ever for the initial rating.

ND was bad enough but Washington was even worse!

This rain surely helped a great deal in parts of ND. 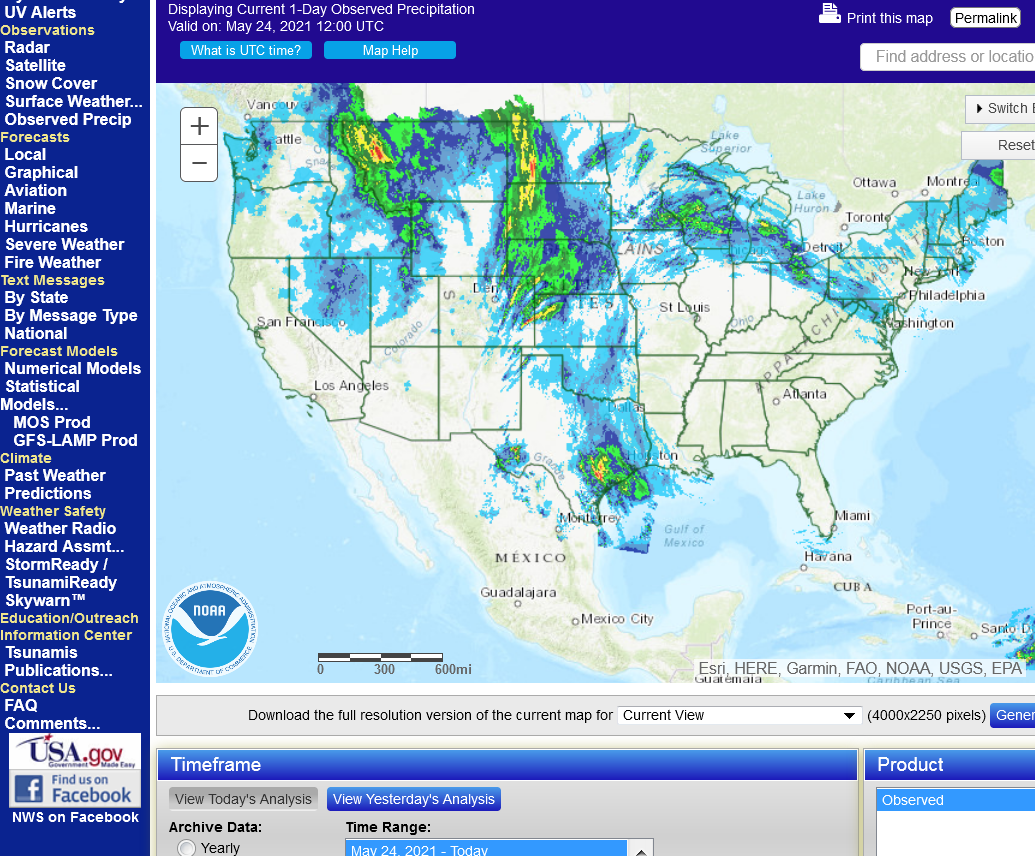 Most of these maps are constantly updated

MN wheat opened a tad higher, then spiked up 10c in less than a minute.

It was very odd because I put in an order to buy several contracts of the MWE.N21 at the gym with less than 20 seconds before the open(at 2c higher than the close) and was worried that I would miss the open and before I saw the opening price and where I got filled(or not) the equity in the account was leaping higher every few seconds and I just put in an order to cover at 10c higher than the open and it got filled right away without even thinking about it.

I figured there would be a knee jerk reaction/spike higher to the extremely bullish/very poor  MWE crop condition but didn't plan on a 1 minute long trade that bought the exact low and sold at almost the high for the session.

MWE is very thinly traded which is a big part of it. After almost 7 hours of trading tonight, the volume is still under 1,000 contracts.

If we take most of the rain out of the forecast for ND, then the lows are likely in for a while for the MN wheat.

However, for the majority of the Cornbelt it looks pretty wet the next 2 weeks. In fact,  there may be a bigger problem from too much rain in the Central to S.Midwest to Central to S.Plains.

Rains did not get into the best HRW growing areas last night near the Canadian border.

So minn wheat is leading the charge higher today.

The new crop is off to a wonderful start in beans and corn. The first crop ratings should show that.

In the wheat, we gave complete opposites on the new crop.

The Winter wheat, especially in KS is on its way to a record yield.

The Spring wheat, especially in ND had its worst initial rating that I remember ever.

Considering the record drought in ND, we don't need memories, we can use historical records of rain and soil moisture going back over a century.

Up until April, this had been the driest start for ND in the record books.

There has been some improvement but you can see from the soil moisture charts above that its still very bad.....especially along the Canadian border where the most HRS is located.

There should be some scattered activity over the weekend but not enough make a difference in ND.

Then we have a dry week, with temperatures heating up to near 90 by the end of next week.

Thanks Mike. I've been in and out of HRSW all spring. Currently long a couple. For some reason, I usually only trade the spring wheat when i trade wheat. I guess I have fond memories of the last big run up

GRAND FORKS, N.D. - The wheat market moved into historic ground Friday in North Dakota and Minnesota, as short-term demand from mills pushed prices up to $20 a bushel at one elevator in an after-hours scramble.

The cost of March spring wheat hit $24 a bushel Monday, double its cost two months ago.

But to make the dough for about 300 pies, Mr. Espinal, the pastry chef, used 22 pounds of flour – an item that the store knows will soon be rising in price.

"I'm expecting it this week," says Michael Salmon, director of operations of Cucina, which is in Macy's in Manhattan. "Maybe 20 or 30 percent."

Why the increase? The prime ingredient in flour is wheat, which these days is acting more like oil – rising sharply on commodities exchanges. On Monday, the price of March spring wheat on the Minneapolis Grain Exchange shot up to $24 a bushel, the highest price ever. Within the past month, the price of some types of wheat has risen over 90 percent. Already, agricultural experts say, it's getting hard to find the type of wheat used to make pasta, noodles, pizza, and bagels.

"Supplies of some types of wheat will be extremely tight," says economist William Lapp, president of Advanced Economic Solutions in Omaha, Neb. "I don't think we'll see physical bread lines, but supplies will be just tight."

Companies that use wheat say they are overwhelmed by the sharp rise and have little choice but to pass on at least part of the increase to consumers. Flour manufacturers, for example, are raising prices by at least 30 percent or more. Since the beginning of the year, bread in the supermarket has risen anywhere from 10 to 30 cents a loaf.

Overall, in January, consumer food prices were up 4.9 percent in comparison with January 2007. Cereal and baked goods rose 5.5 percent. Some items went up even more: Dairy products increased 12.8 percent and fruits and vegetables 6.1 percent.

Decades from now, farmers will still talk about this week – the moment when wheat in Minneapolis soared to nearly $20 a bushel.

Like a 100-year flood, spring wheat prices have risen relentlessly all winter, obliterating every record in sight. At the Minneapolis Grain Exchange, wheat fever pushed prices to $19.80 a bushel in trading Friday – nearly triple the record from 1996.

To grain experts, it’s a warning of what happens when grain supplies don’t keep up with rising demand. Fear of scarcity and shortage push markets far beyond any norm.

“This wheat market has given us a glimpse of the what-if – what if we don’t deliver the goods on the production side, because the demand is here,” warned Ed Usset, a grain marketing specialist at the University of Minnesota.

For the past month, the hottest market in the nation has been the Minneapolis Grain Exchange, the nation’s center for trading spring wheat futures. The high-protein wheat that farmers grow in Minnesota and the Dakotas is prized for making bread, but poor crops worldwide have left wheat supplies at a 60-year low.

The impact of that shortage reaches far beyond the wheat trading pit in Minneapolis. Trading in Minneapolis has supercharged wheat markets in Chicago and Kansas City, Mo., as well. That has pushed corn and soybean prices to near-record levels – fueling a wave of uncertainty about everything from food price inflation to subsidies in the new farm bill to hunger in the developing world.

“Minneapolis, that’s where this is all coming from, the shortage of the actual physical supply of spring wheat and durum,” said Elaine Kub, a commodity market analyst at DTN. She suspects grain prices elsewhere will retreat, but there’s little question about the clamor for spring wheat.

“People are desperate,” Kub said. “You definitely heard stories from out in the country of elevators offering $20 a bushel and getting no sellers. … You hear people tossing around the words ‘wheat hoarding.’ ”

For decades, agriculture’s great problem has been surplus, not scarcity. And ruinously low prices, not ruinously high ones. Farmers have complained bitterly about this, but consumers benefitted from the great abundance of grains and proteins. This week’s action in Minneapolis previews a different sort of marketplace.

On Friday, for the first time in 12 trading sessions, the March wheat contract did not close up the maximum daily trading limit. Because of the higher limits, it closed at $19.35 a bushel, up 82 cents. The return of regular trading to the wheat pit may signal an end to the greatest run-up in wheat history, with wheat prices rising fourfold in a single year.

For farmers, that puts the 2008 Minneapolis wheat market atop the list of legendary bull markets. There haven’t been many: the 1970s boom fueled by Russian exports, the drought-stressed corn market of 1988, the grain spike of 1996 and the soybean market of 2004.

Not much rain to help drought striken ND the next week with temps soaring well into the 90's.

As a result, the HRS wheat crop grown there and also in WA will deteriorate more.

The ratings last Monday were probably the worst initial crop rating for the Spring wheat in history.

HRS crop dropped to 43% gd/ex this week with 100 deg coming to ND late week, then not AS hot but still bullish weather.