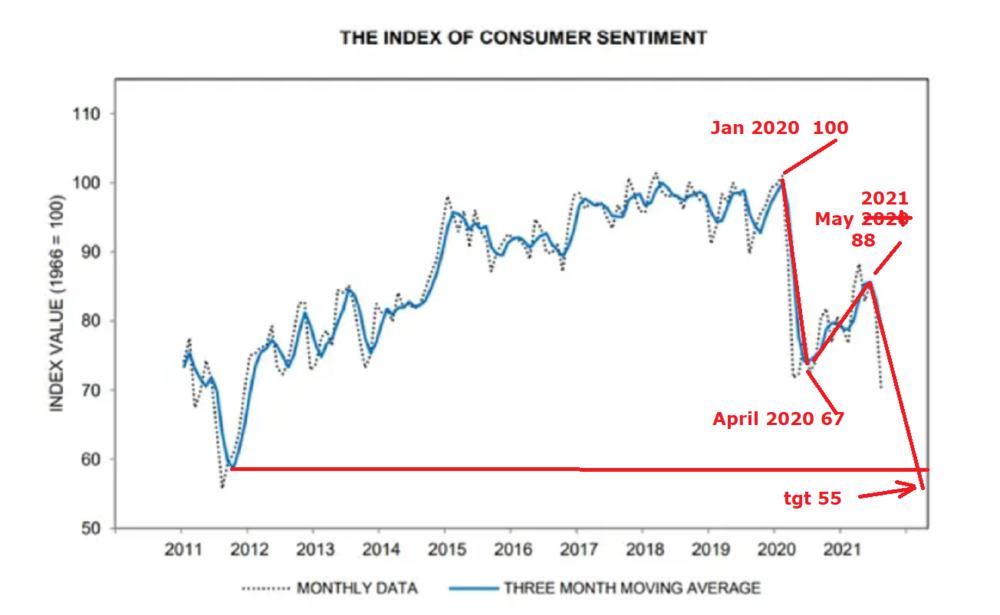 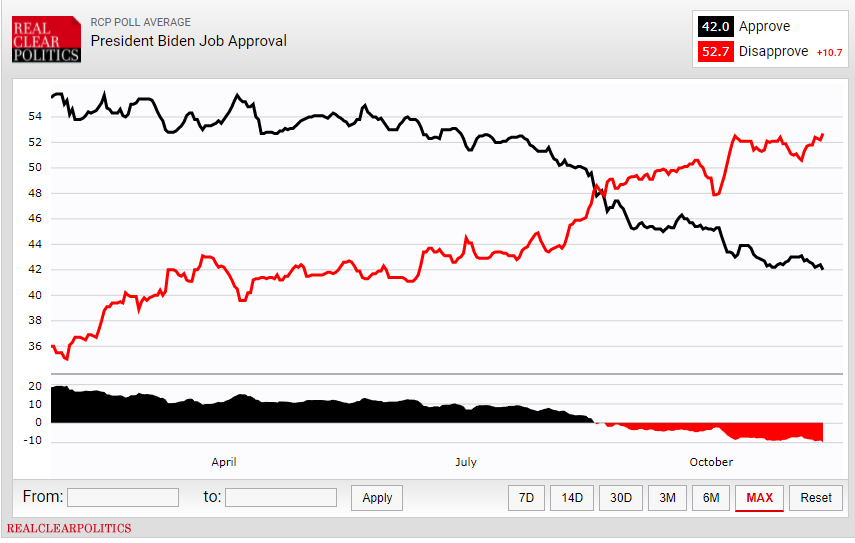 question is why did it take so long for those lines to cross? Surely gov handouts had nothing to do with that

Part of this is that the majority of people voted for him because they saw just 2 choices and went for the lesser of 2 evils.

Now they got to see Joe Biden, the guy behind NOT Donald Trump.

Which tells you really, just how bad the other choice was/is.

So the NO BRAINER choice for the republicans should be..........anybody BUT Donald Trump.

3 in 4 Republicans Want Trump to Run for President in 2024, Poll Finds

This defies logic. Biden is way over the hill and his energy policies(the life blood of every developed countries economy) are the worst in history. The southern border crisis was brought on by this administration.

If he ran or if the under qualified (to be president) Harris ran in 2024, the only person they could beat for certain is TRUMP.

Hillary Clinton would beat Trump by a landslide!

She actually looks pretty good compared to Biden.........that's how bad Biden has been.

yes Hil looks real good today with more coming daily about her involvement with one of the largest scams in US history {Russia}. About the only good thing I can think of is that this Russian hoax makes her other nefarious activities look smaller by comparison. Well except the times her and Bill actually offed a few here and there along the way to millions of dollars.

I hope you are right about NOT Trump winning, but I fear you are wrong.

For example:  Is there one Trump voting forum poster who will vote for NOT Trump?

Talk me off the ledge MM.

shows what closed brains can conceive. I have said many tines I do not want Trump to run, Tim has said the same. So what are you going to make up next? Better and more accurate question would who on the forum wants Trump to run? Cannot think of a one myself.

Count me and Larry as NOT Donald Trump but probably everybody else the other way.

POSTS OF THE DECADE

BEFORE the election WxFollower and especially joj posted about how they thought President Trump would try to overturn the election results if he lost.

This event.........by a very wide margin was the most organized attempt to do the most damage possible to the most cherished element in our Constitution........overturning the presidential  election results and will of the people using blatant fraud!

What about the election?  Trump is not only rigging it by gutting the USPS, but he's preparing the refusal to admit defeat due to a fraudulent election.  (He has state so multiple times). I can't imagine him admitting defeat."

Trump will pull all the stops to stop the vote count:

If you had asked me a year ago, if more than a couple % of people would still be paying attention to the absurd, Big Lie which was proven beyond any shadow of a doubt x 10  to be total fraud, I would have laughed that it would even be worth a question.

But here we are.

The VAST majority of the people that watch FOX (the #1 rated/watched evening commentator station) have been convinced that this actually happened!

I spent over a thousand hours in 50 threads here PROVING conclusively every which authentic  way there is, that the fraud was all committed by the ones alleging fraud.

But here we are.

Man, have I ever learned alot the past couple of years as moderator here. Especially about other people. Actually more than the past 20 years about many things.

I still need to finish up this thread that I started:

The interesting thing about that thread is the people that have the most to learn about it...........will learn the least. But that's exactly what cognitive bias does BY DEFINITION. It's sabotages learning.

You decide what you want to believe and go to the sources that tell you what you want to hear. In the powerful age of the internet and communications , diabolical sources have figured this out. Motivated by self serving interests.....political, financial, power seeking they have capitalized on taking advantage of  peoples biggest weakness.......THEIR COGNITIVE BIAS and strong desire to believe in things that can easily be debunked by an objective mind applying the basic  principles of  fact checking 101.......but get thru all the scrutiny, skepticism, vetting and critical thinking.

None of that matters if you  just tell people what they want to read and hear and believe.

It always works best when you first, create enormous fear and paranoia about a existential threat that will destroy that person's way of life or something they cherish tremendously.

Then, you portray yourself or your side as being the only way to beat the threat........with you having all the secrets and solutions about how to do it and the other side, trying to censor and keep your solutions from seeing the light of day because that is the only way to defeat them.

They are the altruistic warriers of justice and sometimes victims of the evil  sides  attempts to obliterate them. It's always good vs evil.

All will be lost unless you follow them exactly. You can't believe or trust anything the other side says because they are the ones that must be defeated or all will be lost.

This is what defines the climate crisis.

The planet, which is greening up from the current climate optimum for life, best weather and climate in the last 1,000 years BECAUSE OF the increase in CO2 has been completely twisted.

CO2, the building block for all of life is now.............pollution and we must eliminate fossil fuels because they emit the CO2 which is killing the planet.

And here's the thing about cognitive bias again. It allows you to see the other sides political scams with crystal clarity but caused you to always be oblivious to your sides scams.

In every case, YOUR side represents good and the other side is evil.

The right sees the fake climate crisis for what it is(or what they think that it is- which is for sure NOT a real crisis) but is totally blind to their parties scams.....The  Big Lie and the COVID vaccine scare(which is all about justice and freedom and individual rights and their fake/manufactured science).

The left sees the Big Lie and COVID vaccine scams but has totally fallen for the fake climate crisis(which is all about saving the planet for their children and nature).

Hope Trump doesn't run, I think it will be Pompeo, or DeSantis  who right now has 85% approval rate among pubs and 60% for independents. Now dont get me wrong I would vote for Trump in a heart beat if he was running against someone like Hillary, but hopefully he wont run. A lot can change before 2024.

I know that I just posted this in the previous thread but can't help posting it again because I was so, so, so wrong and joj was so, so  right and have to totally acknowledge it and to chuckle about it from the standpoint of  learning something and not having to pay a price for being wrong before the learning something..........like you pay a huge price when you are wrong about a trading position.

What about the election?  Trump is not only rigging it by gutting the USPS, but he's preparing the refusal to admit defeat due to a fraudulent election.  (He has state so multiple times). I can't imagine him admitting defeat."

Trump will pull all the stops to stop the vote count:

I think this one is pretty funny too!

Sometimes, going back and comparing thoughts then to now, can provide unique perspectives that are allow us to understand what there was to learn.

As you can see, conceding the loss to his opponent was the biggest concern that I had last November and was willing to make that the entire basis for me to vote.

This helps one to understand how Trumps totally violating this key ethical principle to the degree that nobody in history has done to the office, country or democracy was so abhorrent to me.

I set my standards,  values/principles on this BEFORE the election not AFTER seeing Trump do this and letting my favorite political information sites give their opinions and telling me what to think and adjusting, only after THEY declared what their followers should think.

This is one of the biggest problems we have in the country right now. Millions of people and their group think and tribalism all following the same sources and feeding together.........getting positive reinforcement from each other at echo chambers and at places like FOX, letting charismatic anchors defining what is right and wrong based on a far right political filter.

I will vote for Biden