Gold panning, or simply panning, is a form of placer mining and traditional mining that extracts gold from a placer deposit using a pan. The process is one of the simplest ways to extract gold, and is popular with geology enthusiasts especially because of its low cost and relative simplicity.

The first recorded instances of placer mining are from ancient Rome, where gold and other precious metals were extracted from streams and mountainsides using sluices and panning.[1]However, the productivity rate is comparatively smaller compared to other methods such as the rocker box or large extractors, such as those used at the Super Pit gold mine, in Kalgoorlie, Western Australia, which has led to panning being largely replaced in the commercial market. 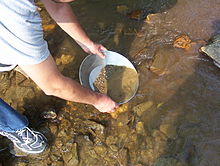