I was not familiar enough with Dr. Oz to have an opinion,   but seeing that the MSM and Steven Colbert have started to slam his character indicates to me that he is likely a good candidate.  I'll look a little more closely.  Maybe I'll even contribute.

Had the opposite been true,  I'd have formed a much different conclusion.

As the dems are apparently doubling down on the policies/actions that cost them Va and elsewhere,  I suspect anyone with an "R" suffix stands a better than even chance in most districts,  outside of San Fransisco.

It's looks pretty likely that he has the massive following and charisma and says all the right things to easily get elected.

However, Dr. Oz got busted numerous times promoting health product scams on his shows and has gone against the well documented medical and health science at times..........and sold it as "alternative medicine"

He has promoted pseudoscience on a number of occasions.

He should do extremely well with most in the current republican party that still supports Trump.

Dr. Oz is running for US Senate in Pennsylvania. Here are 8 times he's made false or baseless medical claims.

Dr. Oz Makes Millions Even Though He's Been Called A 'Charlatan' (And You Should Follow His Lead)

The making of Dr. Oz

The Case of Dr. Oz: Ethics, Evidence, and Does Professional Self-Regulation Work?

A New Low for Dr. Oz

I'd already known about some of the crack pot cures and absurd anti science crapola that he's promoted but just did the search on the previous page to learn more details about the real Dr. Oz and his history.

Based on that, this is the conclusion: 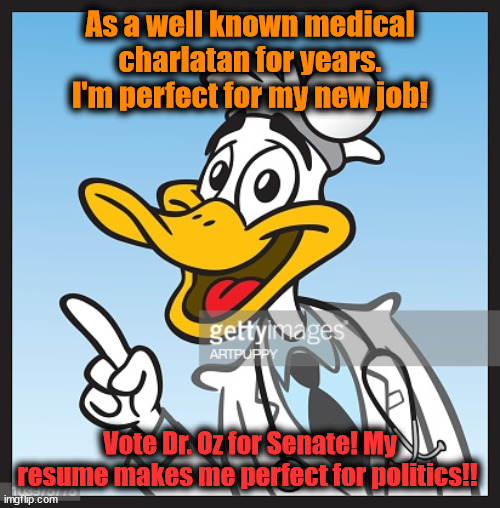 This literally made me laugh out loud when I read it:

Dr. Oz says Fauci should be ‘held accountable,’ suggests he resign after ‘misleading’ Americans on COVID

metmike: As  in........somebody like him, Dr. Oz the biggest long lived tv charlatan doctor in television history, now playing politics. ...........and showing he totally understands how to play the game and what stunts get the most republican votes.........bash Fauci.

I believe Oz is going to make a big hit with republicans!

I believe Oz is going to make a big hit with republicans!

Yes, of course,  because you know the left consistently insists on genuine facts, truth and logic.  Anyone attempting to mislead them will be promptly shown the door,  right MM?

"Neither political side has a franchise on the truth.

If you believe in one political side all the time.....you are believing lies SOME of the time."

At that thread, you can scroll up and down to see 2 gullible, captured minds totally convinced in several conspiracy theories. I just tried to help them out............for months but you can take horses to water but can't make them drink.

One of my biggest objectives here is to expose frauds Tim. It's seriously why I'm here! I've done the exact same thing to the other side countless times too.

The biggest medical tv fraud in history just entered politics as a republican and right out of the gates, he knows what to say to get support/votes.

Bash the medical source that republicans hate......the one insisting that people get vaccinated. Tell republicans that they can't trust his messages.

I will give Oz credit for being strongly PRO vaccine in the past.......thank God.

So now that he is trying to maximize his support to get votes, it's interesting that he's not shouting from the rooftops that people should get vaccinated to save lives and to increase their freedom.

Is it because THAT message is counter to his politics?

If Oz goes back to telling republicans to get vaccinated and sends that message out with gusto...........as a medical doctor........I will totally change my opinion of him and encourage people to vote for him as somebody that isn't just stating things to  maximize support/votes from one side.

Dr. Oz says fully vaccinated people ‘can do things that other people can’t do’

Dr. Oz was on FOX this evening.

He didn't mention one time that people should get vaccinated.........which was always his position well into 2021.

Instead, now he insists that we should focus all of our attention on treating people sick with COVID.

Like I said earlier in this thread, he is clever enough to know all the right things to say to republicans and what to say on FOX in order to get elected.

Not to save lives with authentic medical information and the best advice from a doctor but to generate votes.

It's ethically criminal for a medical doctor that was previously outspoken as a pro COVID vaccination advocate to change his tune and no longer advocate the COVID vaccine because he's running for political office and doing it by highlighting  his medical degree...........while discarding the best medical advise possible in order to advance his self serving political objectives.

Below  was the Dr.Oz BEFORE he decided to change his tune in order to maximize his republican support to generate votes on the Sean (anti COVID vaxx)  Hannity show.

Dr. Oz says fully vaccinated people ‘can do things that other people can’t do’

Doc Oz is a real medical professional that has performed open heart surgeries, for example.  That he is a TV  personality with a flair for showmanship is undeniable.  That he invited proponents of alternative and integrative ideas to entertain with unusual ideas is part of his success.  I personally know people that have interacted with Fauci on both business and social levels.  Unflattering is an understatement.  I would prefer to be operated on by Oz, wouldn't you?  Answer that, please...  Just maybe he is an elite scientist THAT CHANGED HIS MIND BASED ON ADDITIONAL EVIDENCE.. But I'm just guessing.  By the way, what have you done with Gunter?  Someone told me that he is hanging upside down from some rafters, denied sleep while being burned by lit cigarettes until he recants his postings on MF.  Of course, I don't believe that. Met doesn't smoke!

Maybe you didn't read the previous posts or maybe you ignored them or more likely, your political affiliation is determining your position.

Gunter can come back anytime he wants but his posting DISinformation.........many hundreds of posts on it in 2021, that during the year required hundreds of hours for me to bust, rebut, fact check and correct with science and authentic facts and the fact that he has now posted on 5 different conspiracy theories while I've been moderator means he will not last long if he decided to post like that again.

Gunter is not going to try to turn MarketForum into his DISinformation, brainwashing tool, playing to his adoring fans that WANT to read things like that.

I was very disappointed in him repeatedly violating our rules and especially our friendship.

This is EXACTLY the problem that we have in this country right now. One of the biggest reasons to be here is to provide objective, non political  truths and authentic data to help people to discern the truth..........NOT be a source of the lies.

I well know your stance and respect your conduct.  Just making humor about Gunter, because I do miss his style, regardless of views.  I have no affiliation, really.  Enjoy the personalities projected here through their words and phrasing.  Who knows how this whole thing will shake out in the end.  I like to procrastinate on everything, much to the fury of my margin clerk!  Its 2 days now, instead of 3 to make good on a margin call.  I would prefer that I had a choice of medicine to take when being prescribed.  I always ask for pharmaceutical opium or peyote and get the stink eye from my doctor.  Where's Beaners and Local?  They hangin' upside down somewhere?  And how come the thousands of people that you know from both TV times and chess tourneys never post here?  Aren't they aware and eager to interact or they discrete about posting?  Take care, Sir.  No harm intended.  Best of luck and blessings all around!

I don't hang out with the "tv times" crowd anymore hayman.

That was my previous life (-:

Some of those that you mentioned are liberals that probably like to go to liberal places.

Carl was my best man here for well over a year and finally said he couldn't take it anymore with the constant Trump cheerleading.

The internet has changed so much from the days of decades ago when there wasn't a bazillion other choices.

I already knock myself out with some of the best weather and how it affects the ng, grains and other markets stuff..........for free.

Mainly because I love doing it.

The NTR posts used to feature 2 sides having intense battles, personal attacks, not so nice language and total, manufactured political bs.  I won't be a moderator or part of any place like that. .......which caused us to lose people that came mostly for that..........lots of em.

We do have more lurkers/readers at times but its obviously people that are not interested in jumping in that have not always been part of the posting.

I tried to generate more traffic in the beginning by contacting every person that had ever been here before. The harder I tried, the less traffic we got.

I honestly don't care as much now.

As long as we give people useful, educational information on science, markets, weather,  objective politics and many other fields along with positive ideas  based on truth to help people be better human beings...........I'm accomplishing my objective.

People are encouraged to give their views and participate.

hayman, I find you to be an extraordinarily creative person with keen/gifted observational skills.

Extremely esoteric in communicating thoughts which probably go over many peoples heads. I was once described, by the smartest person that I knew in high school as the most esoteric person he knew...so I totally get you.