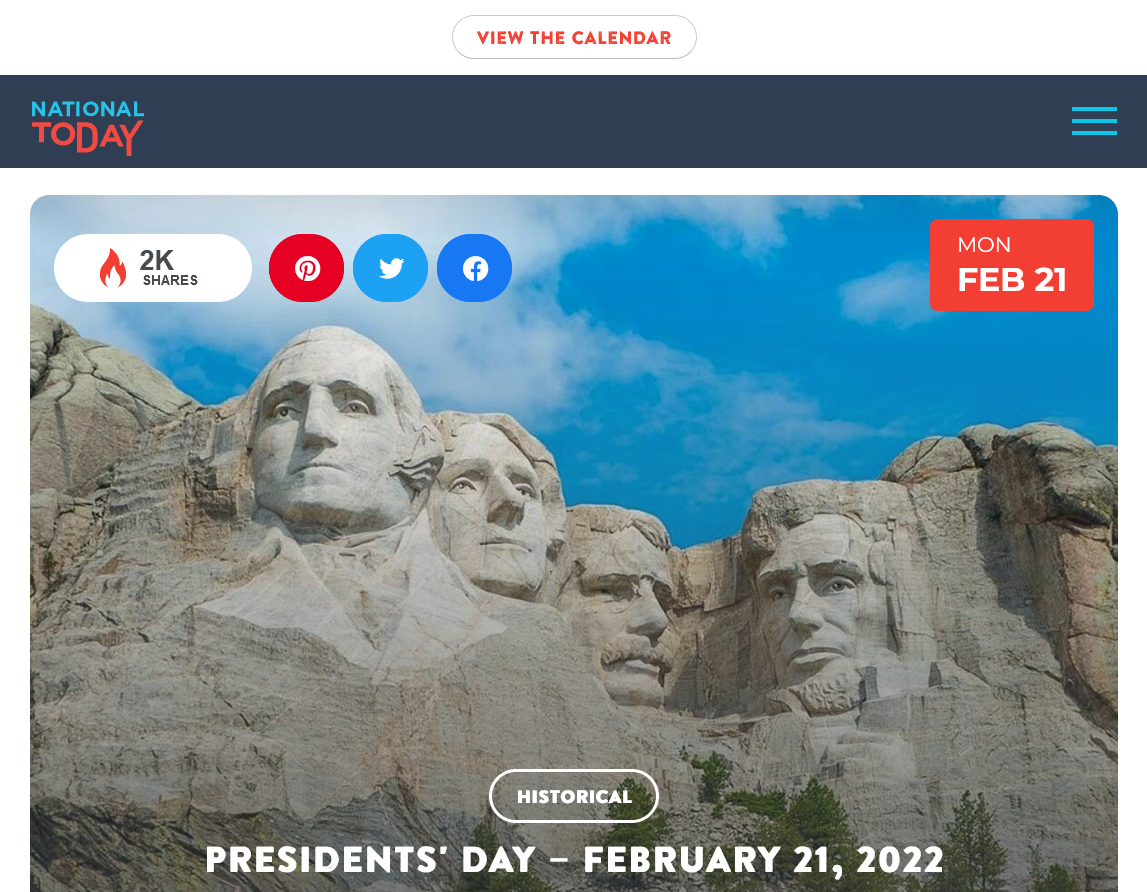 Every third Monday of February (February 21) we celebrate Presidents’ Day in all its patriotic glory. Many people relish their day off of work, but they might be surprised to know that that was the point! In 1971, Presidents’ Day moved in an effort to create more three-day weekends for the public in the hope that this would inspire greater productivity nationwide. It was believed that at this point in the year, the restorative effects of the winter holidays have begun to fade and people need another break to regain some of that lost stamina.

for this week in february, each year, the city of tucson, and pima county have their own holiday.

so this week in feb, we do Not celebrate presidents day.  thursday, friday, saturday, and sunday makes up the 4 day holiday we call rodeo days.  so the local govt agencies, and the local community college take off those days.  (they do not take off presidents day).

the u.of a. is a state entity, so they take of presidents day.  but all the city, and county entities take off rodeo days.

there was a big parade on thursday, and there are 4 days of rodeo.  muttin buttin is great.

this holiday dates back to the early 1900's, long before the creation of presidents day.

so some of the locals say... to "heck" with dead presidents, we celebrate the rodeo.

Thanks for sharing some fascinating local stuff about a wonderful celebration.

I'd never heard of it living in the Midwest but this is huge!

i have a neighbor.  she trains horses for barrel racing.  she is now in her mid 80's.  but even when she was 75 she still did barrel racing, and she WON.  this 75 yr old lady would beat all the young ladies.  she said that barrel racing is 90% having a good horse, and 10% have a good rider.

lets all hope that we can still do that much at the age of 75...

I'm 66, bear and would greatly exceed expectations if I'm just alive at 75!!!

Barrel racing is a rodeo event in which a horse and rider attempt to run a cloverleaf pattern around preset barrels in the fastest time. Though both sexes compete at amateur and youth levels, in collegiate and professional ranks, it is usually a women's event.  It requires a combination of the horse's athletic ability and the horsemanship skills of a rider in order to safely and successfully maneuver the horse around three barrels placed in a triangle pattern within a large arena.

Barrel racing originally developed as an event for women. In early barrel racing, the pattern alternated between a figure-eight and a cloverleaf pattern. The figure-eight was eventually dropped in favor of the more difficult cloverleaf.[1]

Today, barrel racing is a part of most rodeos, and is also included at gymkhana or O-Mok-See events, which are generally amateur competitions open to riders of all ages and abilities. In amateur competition other related speed events (such as keyhole race and pole bending may be added. Barrel racing at this level is usually an event in which riders are grouped by age. There are also open barrel racing jackpots, some open to all contestants no matter their age or gender.

The main purpose of barrel racing is to run a set pattern as fast as possible. The times are measured either by an electric eye, a device using a laser system to record times, or by a judge who drops a flag to let the timer know when to start and stop the clock. Judges and timers are more commonly seen in local and non-professional events.  The timer begins when horse and rider cross the starting line, and ends when the barrel pattern has been successfully executed and horse and rider cross the finish line. Success depends on several factors, most commonly the horse's physical and mental condition, the rider's horsemanship abilities, and the type of ground or footing (the quality, depth, content, etc. of the sand or dirt in the arena).[3] 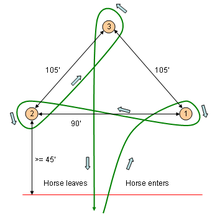 Diagram of a Barrel Racing Course. Riders enter at the red line, circle around the 1st barrel, proceed to the 2nd barrel, and then continue on to the 3rd where they will complete the pattern and finally exit the course crossing the red line a second time. This pattern is often referred to as a "Cloverleaf". The pattern may also begin with the left barrel first.

Modern barrel racing horses not only need to be fast, but also strong, agile, and intelligent. Strength and agility are needed to maneuver the course in as little distance as possible.  A horse that is able to "hug the barrels" as well as maneuver the course quickly and accurately follow commands, will be a horse with consistently fast times.[4]

In barrel racing, the fastest time wins. Running past a barrel and off the pattern will result in a "no time" score and disqualification. If a barrel racer or her horse hits a barrel and knocks it over there is a time penalty of five seconds (sometimes more), which usually will result in a time too slow to win.  There is a sixty-second time limit to complete the course after time begins.  Contestants cannot be required to start a run from an off-center alleyway, but contestants are not allowed to enter the arena and "set" the horse.  At professional rodeos, it is required that the arena be harrowed after twelve contestants have run.  Barrels are required to be fifty-five gallons, metal, enclosed at both ends, and of at least two colors.  Competitors in the National Barrel Racing Association (NBRA) are required to wear a western long-sleeved shirt (tucked in), western cut pants or jeans, western hat, and boots. Competitors are required to abide by this dress code beginning one hour before the competition.[5]