As it is now accepted here on the forum that opinions and polls overrule facts and logic. I am once and for all resolving the debate on banning AR 15s.  A Twiitter poll showed  93.1% opposing banning semi-auto weapons, and as AR-15's are semi-auto weapons,  then the opposition to their banning is over whelming.

Thankfully,  we can bring this debate to a close.

thanks Tim. So grateful to now realize not every issue is to be settled with polls form the likes of cnn and msnbc. Also grateful for the notion that anti-gun libs make up he majority of those polled{for some here}. Man what were our founders thinking. Instead of spending months in a sweat box in Philadelphia dutifully writing our founding documents they could of just taken a poll.

Sure beats the heck out of actually thinking, doesn't it  :-)

This one will make for some great enlightenment analysis.

The debate based on authentic facts and polls was already settled in previous threads but the analysis of the actions of the extreme, non negotiating people who won't acknowledge those legit facts and will search the internet for anything they can find to reinforce what THEY and people like them want to think from echo chambers of like minded people is scientifically fascinating.

Either you don't understand the internet/Twitter, you think that I am dumb or you think that other people here who believe this are gullible Tim........possibly all 3.

Do you not know that people on Twitter follow the tweets of others,  based almost entirely on wanting to read messages that say the same things that they believe in?

Sort of like, Fox News has viewers that are far right.........because of the content of their news.

Here's some  good examples, to help you out:

So this poll of yours, was taken by a far right entity with people that follow them on Twitter to get their far right news to see what far right people think about banning semi-automatic weapons.

I note that you didn't represent it that way, Tim, instead it was posted as indisputable  gospel, settling the debate once and for all, absurdly claiming that we should be thanking you for it.

I'll have some authentic, scientific polls on this topic in  the next few pages for others to show what the truth is...........that is, for those that actually care about the truth vs creating their own false narratives and believing in them with the faith of a religion.....which is exactly what the problem in our country is today.

People refusing to look at any truths that contradict their extreme, tunnel vision politics.

Here's a reliable/trustworthy,  objective/scientific source. It confirms what most people already knew. Views on this topic are extremely bi polar.

In fact, so extreme that some people will take a poll of people like themselves that have the same views and try to push it here as legit (-:

Key facts about Americans and guns

On some elements with this topic, there is actually very strong agreement!

The responses lining up pretty close with political party affiliation as witnessed here on MarketForum and everywhere else in America today. 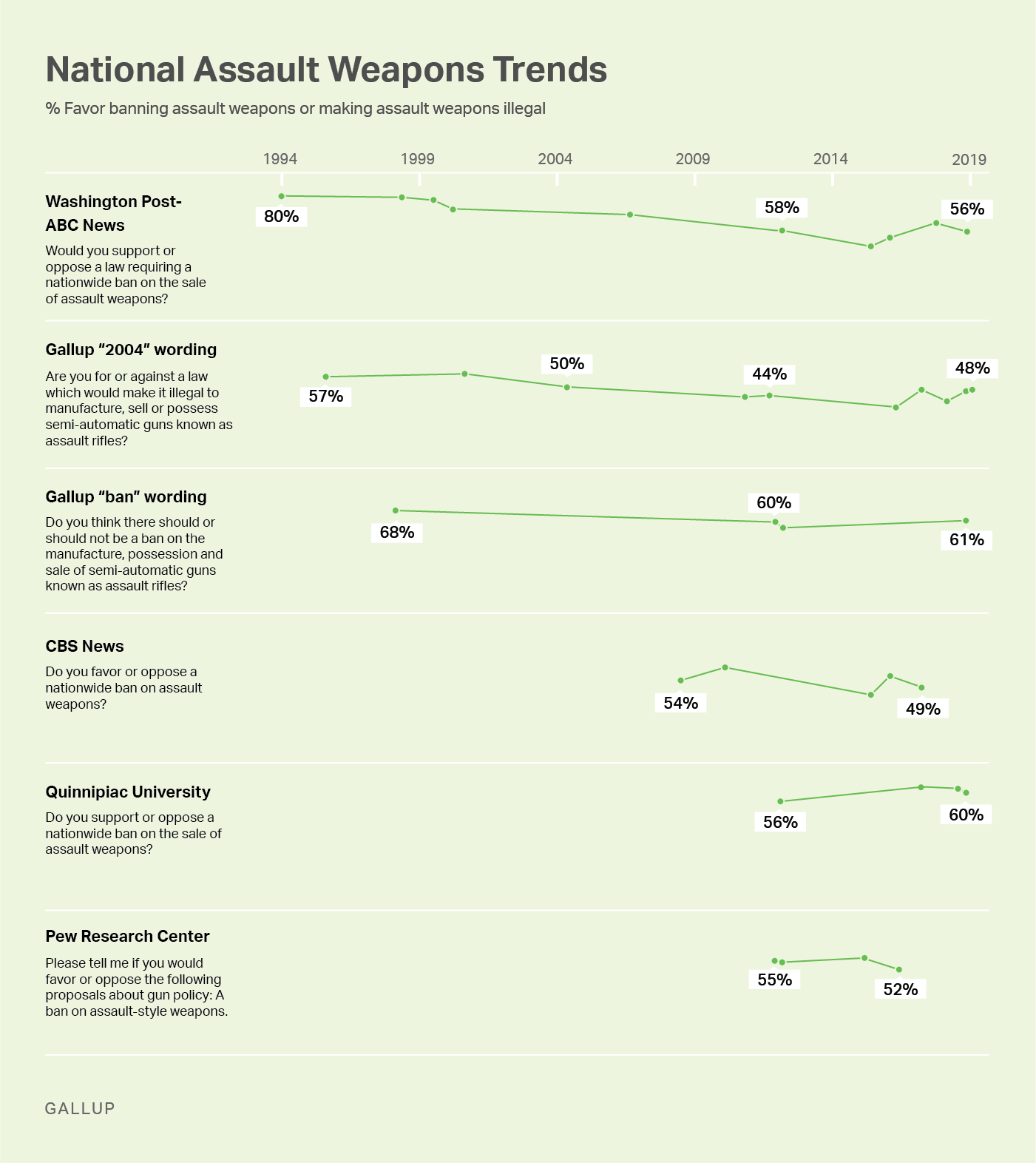 This shows that when you use dishonest data/evidence, it actually backfires because it obliterates any semblence of objectively/credibility for the source presenting it (to anybody that is not part of the captured minds/group think/tribalism based on tunnel vision politics) because it proves where the blatantly biased source is really coming from.....using manufactured data to support a religious faith cause and ignoring anything that contradicts it............even the truth.

Can we assume that you completely ran out of legit stuff awhile ago?

You wouldn't be trying this dishonest  trick if you still had legit stuff, this late in the debate.

Speaking of which, here it is/was:

This is hilarious MM.     You are going for humor right?

I'm totally basing it on you tim. Seriously!

You stooping to the means in this thread indicates that you had nothing legit left and you must have lost to be so desperate with a risky, entirely counterproductive strike as a last gasp effort to keep the troops locked in on false narratives.........and reinforce this tenet of being a loyal republican to yourself.

so only 18% of Fox viewers accept election results. I do not have time to read links right now, so is that the winner of the election or the vote totals. I do in fact know plenty of people and seen plenty of facts to reassure me that Joe Biden did not win any election by 8 million votes. The winner more than likely would not change but the vote total would. And then another door opens, how close were those 5 states? Close enough? Not close enough? Take out all the special covid rules and vote harvesting, the illegals, the thousands of ballots sent to single addresses, on and on and pretty easy to see those 8 million shrink. So just what does that 18% number means exactly? To me it means Biden never got close to winning by 8 million but that and a about 3 dollars now thanks to Biden, will get you a cup of coffee or 1/2 a coke

MM you can post here a hundred times per day that present day teachers know a lot. My opinion is they used to know a lot. Nothing like they used to know. Sorry my opinin and its not a stupid, meaningless, jarheaded thing to think. Look at the mess our public education system is in. Yes I have been in schools. As I have stated numerous times I coach kids basketball every year. Yu coach chess. Good for you, but its no different than me.

I try to learn as much as possible every day and share all of it with others if possible.

Your posts are the quintessential example of this:

Rationalization is a defense mechanism (ego defense) in which apparent logical reasons are given to justify behavior that is motivated by unconscious instinctual impulses.[1] It is an attempt to find reasons for behaviors, especially ones own.[2] Rationalizations are used to defend against feelings of guilt, maintain self-respect, and protect oneself from criticism.

Rationalization encourages irrational or unacceptable behavior, motives, or feelings and often involves ad hoc hypothesizing. This process ranges from fully conscious (e.g. to present an external defense against ridicule from others) to mostly unconscious (e.g. to create a block against internal feelings of guilt or shame). People rationalize for various reasons—sometimes when we think we know ourselves better than we do. Rationalization may differentiate the original deterministic explanation of the behavior or feeling in question.[3][4]

John McEnroe might have said this regarding that stat:

This can NOT be serious!

There's no way this can be believed. Only 1 in 14 want it banned? The Dems alone would almost have to make it at the very least 25% that would favor the ban and probably it is a good bit higher, especially also considering independents as well as moderate Pubs.

WX.  My point is that relying on polls is a really bad idea.  Yet, Polls are often used here to "Prove a point".   You can always find polls to support whatever belief you care to have.

As if opinion=fact.   And opinion is nearly the exact opposite of fact.  But we have people here who don't understand that concept at all.  You can have fact based opinions,  but you can not have opinion based facts.  Get it?

They'll  post opinions and appear to regard them as fact and.....  then go on to insist that they have PROVED their point.

Its kinda like that old "Pigeon on the Chessboard" Story.

There are scientific polls conducted by reputable firms.........and there are flawed polls using blatantly biased and dishonest methods

It proves that you can't trust polls like the one that you used to support what you want to believe and think that others here will fall for it too.

I showed you some reputable polls. They aren't perfect  but they do a pretty good job in most situations.

The ones that will argue strongest with that, mainly don't like what the polls are showing because it's different than what they want to believe.

MM, in my opinion you getting further into the weeds, Polls blow like the wind. Facts do not.

Here's where you are confused MM.

Polls, no matter how scientific and reputable, are measuring the opinions of a group. Opinions, no matter how accurately assessed, are still opinions. Opinions are not the same thing as facts.  As I said above, you can have fact based opinions, but you cannot have opinion based facts.