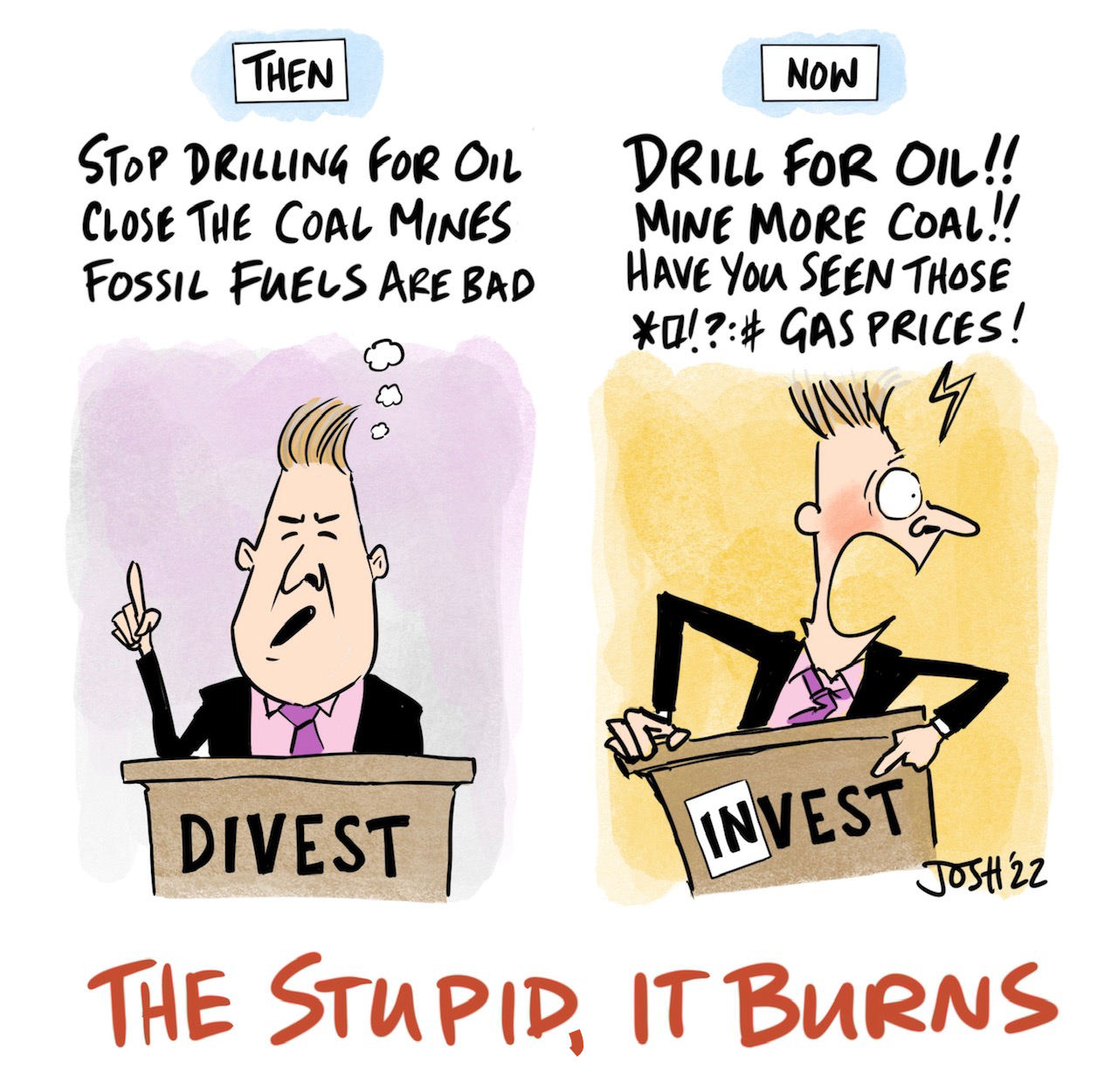 "Biden demands energy companies invest tens of billions more in new drilling infrastructure, when everyone knows that tomorrow, when prices recede, Democrats are going to go right back to passing laws and regulations that undercut their business.

Democrats have spent decades warning that the United States must stop using the most efficient and affordable energy sources or it will be consumed by heat waves, fireballs and cataclysmic weather events.

Every flood, every hurricane — every natural event, really — is now blamed on climate change. We have burdened our children with an irrational dread over their future."

Late Tuesday, when asked by a reporter about Wirth’s letter, President Biden called the Chevron chief “mildly sensitive…I didn’t know they’d get their feelings hurt that quickly…We need more refining capacity. This idea that they don’t have oil to drill and to bring up is simply not true. We ought to be able to work something out whereby they’re able to increase refining capacity and still not give up on transitioning to renewable energy.”

Your wallet:Biden weighs a gas tax holiday. How much would consumers really save?

More:Biden to release up to 180 million barrels of oil from reserve to drive down gas prices

Pain at the pump:With gas prices at $5 a gallon, Biden tells oil companies to cut costs for Americans

metmike: This always HAD to happen because of the war on fossil fuels. 100% chance because of the physical laws that rule regarding energy and economics. Putin did make it a bit worse but again, much of the huge investment money had been diverted away from fossil fuels to fake green, solar and wind, starting back in the Obama years. It was always going to take a while, with Biden recently accelerating it with his fake green energy policies, then Putin exposing the big weak points that were already there and getting worse.

Biden: “I Guarantee You We’re Going To End Fossil Fuel”

Joe Biden: “We Are Going To Get Rid of Fossil Fuels”

Fossils fuels account for 80 percent of energy consumption. Is Joe Biden really promising to transition the entire US economy off of them?

Biden's climate agenda: Is this the beginning of the end for fossil fuels?   31 January 2021

Energy prices have been major driver behind inflation, which surged 7% in December

White House says Biden still working to end fossil fuels: 'You can do both'

THE Top authority on the planet when it comes to the affects of CO2 on plants.

“The present study addresses this deficiency by providing a quantitative estimate of the direct
monetary benefits conferred by atmospheric CO2 enrichment on both historic and future global
crop production. The results indicate that the annual total monetary value of this benefit grew
from $18.5 billion in 1961 to over $140 billion by 2011, amounting to a total sum of $3.2 trillion
over the 50-year period 1961-2011. Projecting the monetary value of this positive externality
forward in time reveals it will likely bestow an additional $9.8 trillion on crop production
between now and 2050″

IEA Warns Russia could Cut Off All Gas to Europe

5) 2014, What do these 4 American politicians have in common?
Nancy Pelosi,
John Kerry,
Joe Biden,
Mitt Romney.
They all have a son working for a Ukrainian Gas company. Talk about corrupt Russian oligarchs, how about the American ones.

NOT true.
This is FAKE news, other than Hunter.

In the age of rampant DISinformation, we should try to fact check most news, especially if it’s on social media and states something that lines up with our own belief system……..which disarms our skepticism/bs meter.

There's plenty of stuff on Hunter though:

Terms used(abused) as part of the marketing scheme to inspire widespread anti science fear in order to eliminate fossil fuels:

Extreme Weather = They’re working on that one

Bill Gates and Elon Musk: The Battle of the Climate Change Hypocrites

Gates’ BD-700 Global Express jet aircraft (below) consumes 486 gallons of fuel each hour. A study conducted by Stefan Gössling of the School of Business and Economics at Linnaeus University in Sweden showed that in 2017, Gates took 59 flights by private jet and, during the over one-third of a million kilometers traveled, his jets emitted more than 1,600 tons of CO2. That is almost 90 times the average annual “carbon footprint” per person in the U.S. for everything they do, not just air travel.

Musk is no better. Though stating that “humanity is faltering” and that Tesla “exists to help reduce risk of catastrophic climate change,” he too has a penchant for flying on private jets.

In May, Business Insider reported that Musk bought two private jets in the past two years. The “environmental price” of his carbon-emitting lifestyle isn’t small potatoes. In 2019, the Washington Post reported that his corporate jet “flew more than 150,000 miles [in 2018], or more than six times around the Earth, as he raced between the outposts of his futuristic empire.” The cherry on top is that the Post made it clear that “some of the flights were recreational getaways for Musk or his family,” not just business trips.

If that’s how one can behave when “humanity is in crisis,” then how is the sky not already falling?

Of course, Musk being a hypocrite in this area is nothing new. Wired magazine reports that, “despite their green cred, Tesla cars create pollution and carbon emissions in ways that are easily overlooked by consumers and investors.” This theme is explored in detail in the 2021 book Clean Energy Exploitations – Helping citizens understand the environmental and humanity abuses that support ‘clean’ energy, by engineer and energy consultant Ronald Stein and Todd Royal, an independent public policy consultant focusing on the geopolitical implications of energy. They explain:

“Tesla Motors’ ‘dirty little secret’ is turning into a major problem for the EV industry—and perhaps mankind. If you think Tesla’s Model S is the green car of the future, think again. The promises of energy independence, a reduction in greenhouse gas emissions, and lower fuel costs, are all factors behind the rise in the popularity of electric vehicles. Unfortunately, under scrutiny, all these promises prove to be more fiction than fact.”

U.S. Heat Waves: Dessler Continues to Step In It 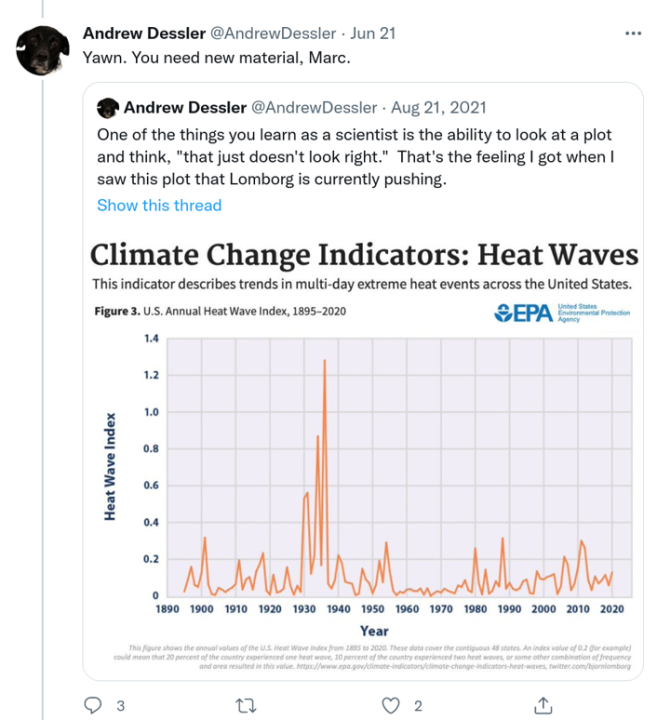 How many states had their hottest temperature ever since 2000, a period more than twice as long as the 1930’s and during the supposedly hottest 2 decades of US history.  Just 6 states.

It’s awesome when the data speaks louder than the bullshit! 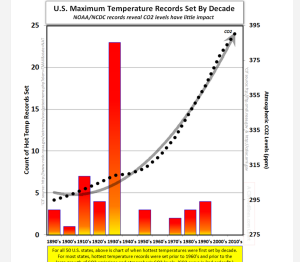 100+ degree days at one site in southwest Iowa. 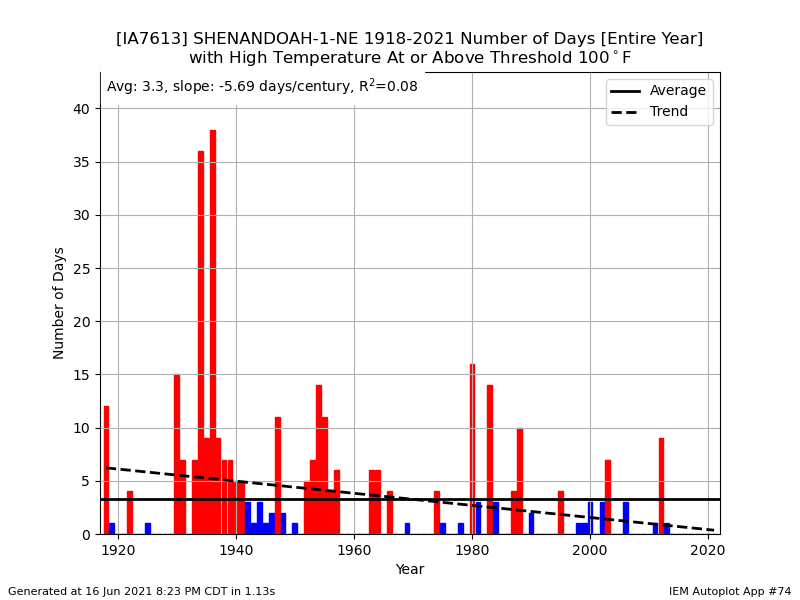