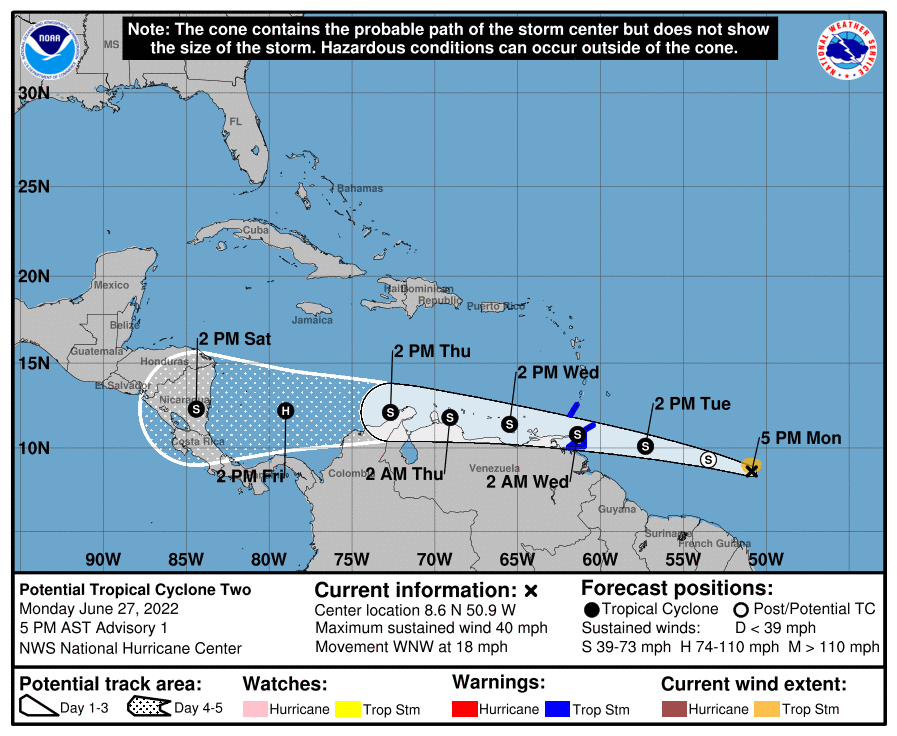 The first NHC Potential Tropical Cyclone 2 advisory was just issued at 5PM. This one is currently ~700 miles ESE of the Windward Islands moving WNW. Models and the forecast have this landfalling in Nicaragua on Saturday. Hopefully this will not be another disastrous freshwater flooding event for western Honduras and Guatemala like Eta and Iota were in November of 2020. Each of those by themselves resulted in by far the worst river based flooding in those areas since Mitch of 1998 and thus resulted in a severe humanitarian crisis with millions affected along with numerous refugees. This is one of the primary causes of US/Mexican border encounters increasing sharply starting in early 2021. The thinking right now is for it to be moving fast enough to not cause flooding anywhere near as bad as the 2020 storms. It is projected to move 2-3 times as fast as Eta/Iota. It being July instead of November may be a climo reason for that.

Thanks much Larry, keep us posted. I hadn't been watching the tropics at all.

Readers can get all the updates of that advisory by going here and hitting the red X in this case:

That will get you to this screen where you have lots of choices, a couple of which, Larry has been kind enough to copy for us.

Readers can get updates here:

That will get you to this screen where you have lots of choices, a couple of which, Larry has been kind enough to copy for us. Thanks for the update. Until just a little while ago, I thought the same thing...that it would get a new name if it were to crossover intact. But I just found out that the same name would remain if it does first get named in the Atlantic basin. Otto of 2016 did just that. I hadn't realized that or forgot:

Fascinating Larry, Thanks a ton!