This is mind boggling!!!

And Biden illegal migrant releases now exceed 836,000 — does the president have a plan?

According to an April filing in Texas v. Biden, CBP encountered 221,303 illegal migrants at the Southwest border last month, bringing total encounters there to just fewer than 1.06 million for just the first half of FY 2022. Worse, DHS released more than 80,000 of those migrants into the interior last month, raising the total number of migrant illegal releases under the Biden administration to 836,225. While it seems the White House doesn’t have a plan to stem the surge of aliens crossing the border illegally, the truth may be much more complicated.

While Texas is pending before the Supreme Court, Judge Kacsmaryk’s order remains in place. Given the Biden administration’s utter lack of transparency when it comes to the deleterious effects of its immigration policies, DHS’s disclosures to the court offer the best view into what is actually occurring at the Southwest border.

A Historically Bad Border Gets Worse.Biden promised in December 2020 that he would create “guardrails” to prevent chaos at the border before reversing his predecessor’s immigration initiatives.

Almost immediately after he was sworn in, however, Biden began dismantling policies and procedures that the Trump administration had implemented to successfully slow illegal entries into the United States, without any plan to deal with the inevitable rush of aliens who would come illegally to take advantage of his more “humane” immigration posture. In lieu of “guardrails”, Biden created a border “sluice”.

As I have previously explained: “’Doing nothing’ to prevent illegal entries is itself a policy, and ‘nothing’ is what the president has done to respond to the flood of illegal migrants pouring across the Southwest border, all but unabated, since February” 2021.

Despite Title 42, however, the Southwest border has been in an unprecedented state of chaos under Biden. Border Patrol set an all-time record for apprehensions there in FY 2021, and since the beginning of February 2021 (Biden’s first full month in office), CBP has encountered nearly 2.5 million aliens who have entered illegally or without proper documents at the U.S.-Mexico line.

Of those nearly 2.5 million aliens, about 1.356 million have been expelled under Title 42. That still leaves more than 1.124 million who have been processed under the Immigration and Nationality Act (INA) since February 2021.

Which brings me to DHS’s migrant releases. Under section 235 of the INA, DHS is supposed to detain all illegal migrants and aliens seeking admission who are not clearly admissible, but through the end of March, the Biden administration has released 836,225 of them. The Biden administration’s lawful authority to release any of those aliens — as opposed to returning them to Mexico to await their asylum hearings — is at the heart of Texas.

As I have noted before, the number of illegal migrants the Biden administration has released into the United States is greater than the population of Seattle (787,995) or Denver (760,049).

Adding in more than 157,000 unaccompanied alien children (UACs) from “non-contiguous countries” (whom DHS Is required to hand over to the Department of Health and Human Services for “placement” with a “sponsor” — usually the child’s parent or a close relative — in the United States) encountered by CBP at the Southwest border since February 2021 and 620,000 “got-aways” who eluded Border Patrol apprehension in FY 2021 and FY 2022, the total number of illegal migrants who have reached the interior since Biden became president stands at more than 1.6 million.

If those aliens were a city, it would be the sixth-largest in the United States, exceeding the population of San Antonio (1,598,964) and Philadelphia (1,585,480). Stalin likely never said “The death of one man is a tragedy; the death of millions is a statistic”, but that anecdote sticks to the “Red Tsar” because it reveals a fundamental truth — numbers can become so large as to lose meaning.

Consider this, however: Those 1.6 million aliens, who will be living in the United States indefinitely (if not forever), represent about .5 percent of the total current U.S. population (334.5 million), they each exceed the tight admission caps in the INA, and they all arrived since Inauguration Day.

They will use public services (transportation, waste, police, fire, water, etc.); most will need housing and jobs; they will largely seek the simplest of medical care at emergency rooms; and the children will attend school (the UACs alone would be the 17th largest school district in America). All that costs real money and U.S. taxpayers will be left footing the bill.

It just keeps getting worse and worse!

Record Number of Migrants Encountered at U.S.–Mexico Border in May

The number of migrants apprehended crossing the southern border hit a new record last month, according to U.S. Customs and Border Protection data released on Thursday. 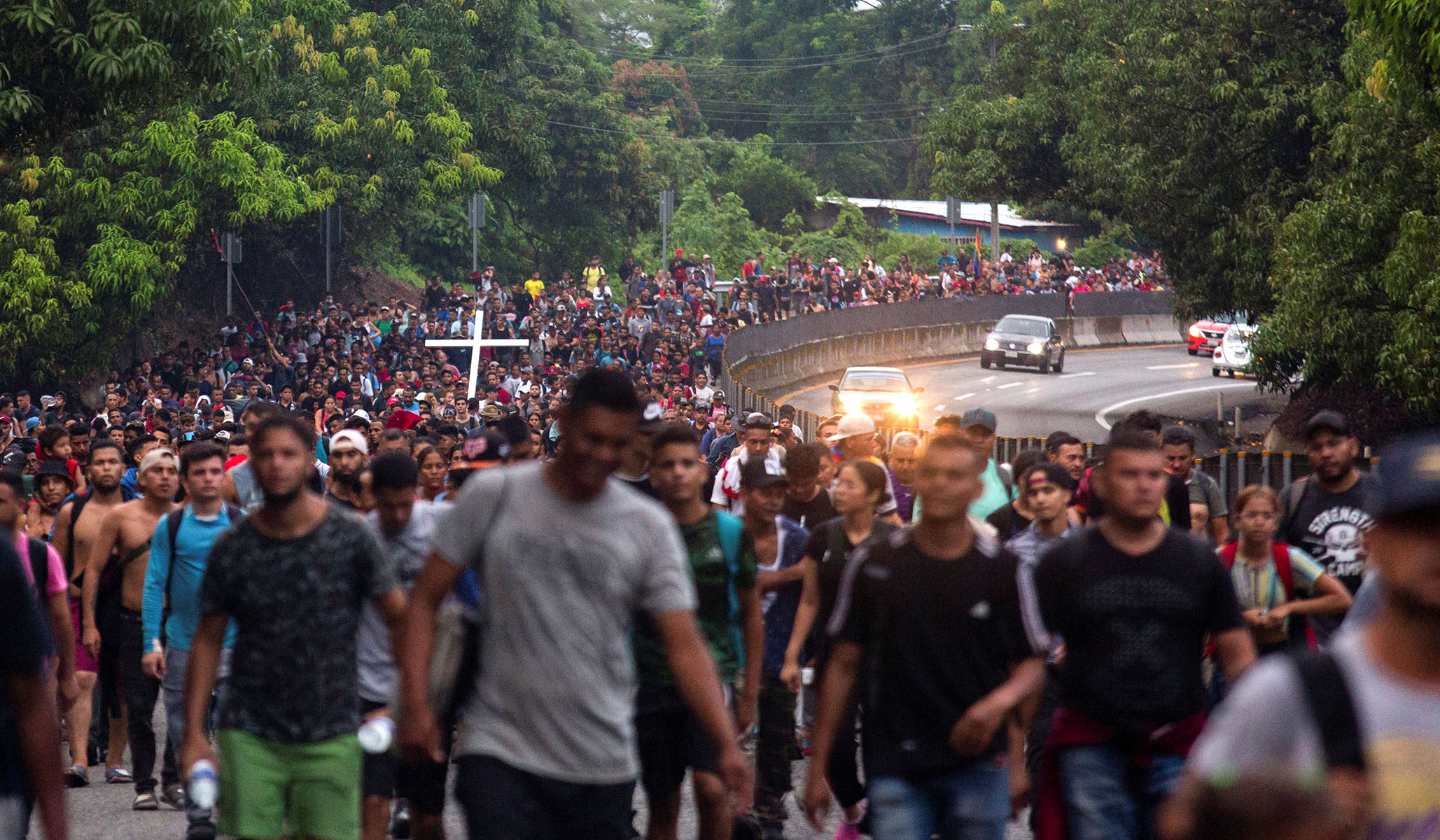 Migrants walk in a caravan to cross the country to reach the U.S. border in Huehuetan, Mexico, June 7, 2022.

Border authorities registered more than 239,000 encounters in May, as a growing number of migrants from Cuba, Venezuela and Nicaragua, as well as Russia and Ukraine, sought to enter the country

Most of the border crossings recorded were made by individuals. According to the CBP, of the 239,416 encounters registered, 25% involved individuals who had at least one prior crossing attempt in the previous 12 months. Forty-two percent of encounters were processed for expulsion under Title 42.

What’s happening at the U.S.-Mexico border in 7 charts 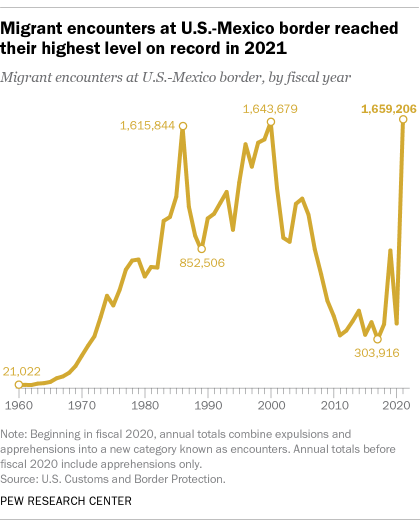 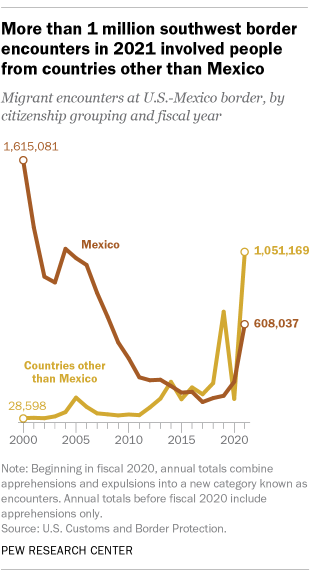 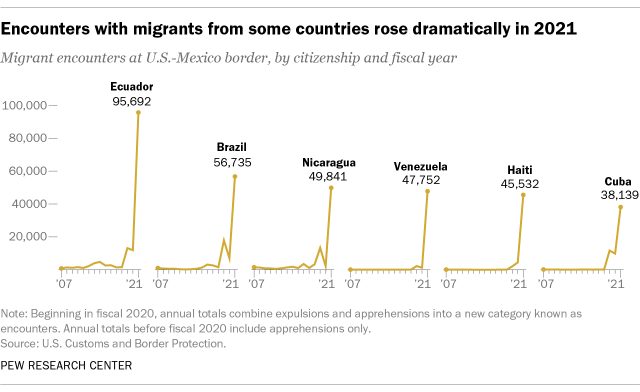 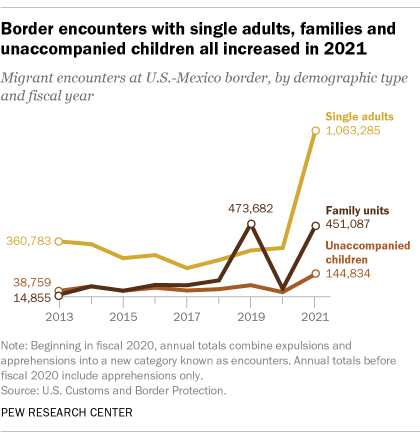 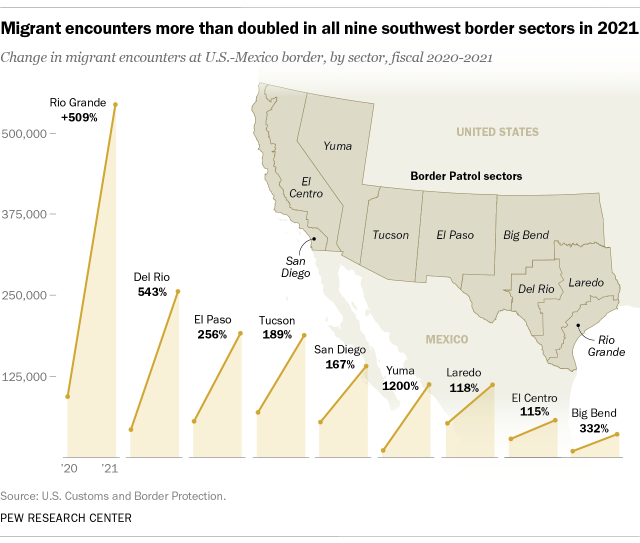 metmike: Numbers usually peak before the intense heat of Summer!

Numbers in the last several months in  2022(records), would be above the top of this chart! 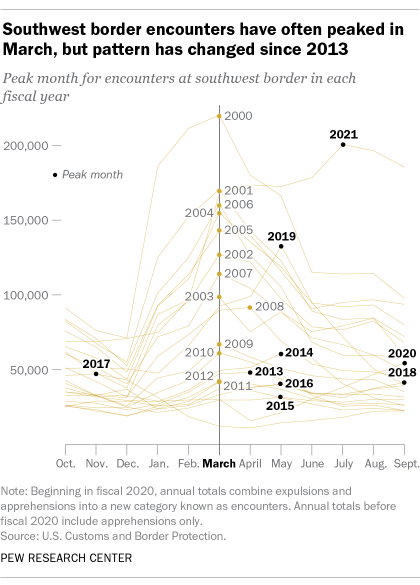 2022 is headed for more than 2 million, obliterating the previous record. 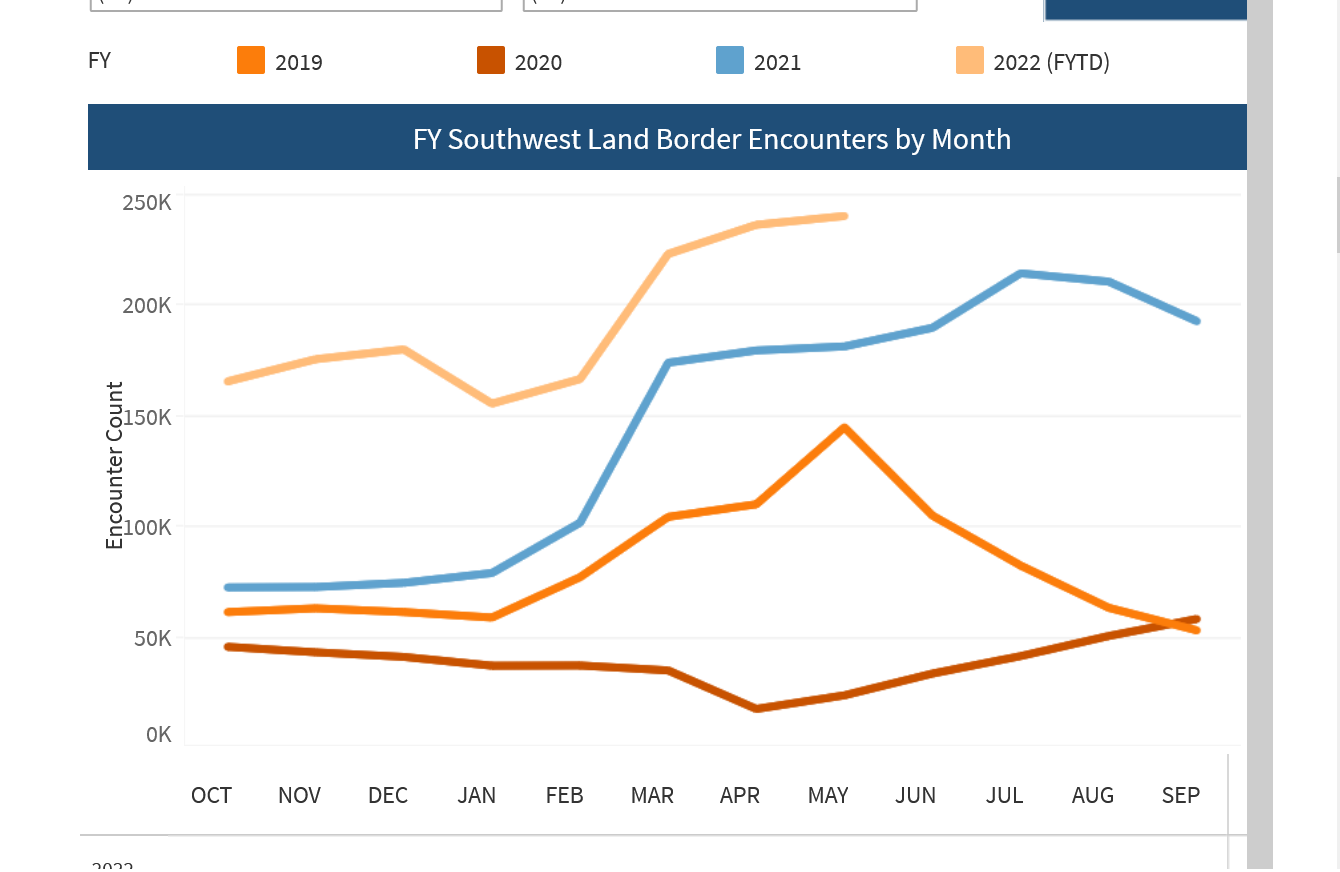 Vice President Kamala Harris is supposedly the White House point on the border surge, but the issue has vanished from her schedule, the Los Angeles Times reports; she hasn’t hosted an immigration event in nine months.

This, though April saw a record 234,088 migrants apprehended at the southern border. Team Biden released 110,000 of those migrants into the interior, and you can add the many thousands who never got caught to that total.

And “root causes” Harris has stopped pretending to do anything about it, after a few Central American photo-ops and blank “do not come” appeals. (Her press secretary lamely insists she’s still on it.)

Despite the issue being at the top of the list of crises facing the country, it’s obvious no one in the White House wants to touch the growing disaster.

After all, the real Biden approach here is “let ’em in,” and who wants accountability for the inevitable results?

Just like with the disastrous energy policy being very intentional based on the fake climate crisis and killing of fossil fuels, this border policy is also very intentional.