Representatives for Florida's governor did not respond to several questions about the information provided to migrants ahead of their transportation to Martha's Vineyard, how the migrants were selected for the operation and who oversaw the transportation.

In addition to the political backlash from Republicans, the Biden administration has faced dire logistical and humanitarian challenges along the U.S.-Mexico border over the past year amid unprecedented levels of migrant apprehensions, which are set to surpass 2 million in fiscal year 2022, an all-time high, government data show.

In recent months, U.S. border officials have processed record numbers of Cubans, Venezuelans and Nicaraguans, who, unlike many Mexican and Central American migrants, cannot be deported to northern Mexico or their home countries because of limits placed by Mexico and strained relations with the leftist regimes in Cuba, Venezuela and Nicaragua.

first and foremost its "illegal alien" crossings that are the problem. Its America's problem and as you have seen from the comments from Martha's Vineyard the elite snobs don't want any part of very problem they have created for places like Florida, Texas and Az.....only the rich elites have 50. Hell the Obama's have a house far bigger than those 50 would need but funny thing have not seen that offered yet. Mean while those 3 states are expected to take care of millions of illegals.

TEXAS (CBSDFW.COM) - For the second straight day, the White House condemned the decisions by Texas Governor Greg Abbott and Florida Governor Ron DeSantis to send migrants from Texas to the east coast.

But President Biden accused the Republican Governors of interfering with the process that his administration has in place at the southern border.

Speaking at the Congressional Hispanic Caucus Institute Gala Thursday night, the President said, "Instead of working with us on solutions. Republicans are playing politics with human beings using them as props. What they're doing is simply wrong. It's un-American. It's reckless."

"Why don't they care about the Texas towns that are literally facing millions? You got to the valley and every hospital bed is full, every prison is full, the schools are overflowing.. and the administration's policy is just to allow it wide open," Cruz said.

The State of Texas made headlines Thursday after two buses of migrants arrived outside of Vice President Kamala Harris' official home, the U.S. Naval Observatory.

That followed the state of Florida sending migrants from Texas on a chartered flight to Martha's Vineyard.

During a news conference in Daytona Beach, DeSantis said his state has gone to Texas to identify migrants who want to go to Florida after they're released from federal custody and wait for their asylum hearings.

DeSantis said he is offering the migrants trips to sanctuary cities and called the situation at the southern border a failure by the President.

"He didn't scramble to get his cabinet together when we had millions of people illegally pouring across the southern border.. It's only when you have 50 illegal aliens end up in a very wealthy, rich, sanctuary enclave that he decided to scramble on this," DeSantis said.

Jean-Pierre cited reports that both states have misled the migrants about where they are being sent and the help that they will receive.

But DeSantis and Abbott's Press Secretary have insisted that the asylum-seekers are told where they are going and must sign waivers before making the voluntary trips.

To date,  Abbott said the state has sent more than 11,000 migrants to other cities, which has cost the state $12 million.

On Thursday, California Governor Gavin Newsom called on the U.S. Justice Department to investigate the states of Texas and Florida for sending the migrants to other cities.

No word yet if the Justice Department is doing so.

https://www.cnn.com/2022/08/29/us/mexico-border-encounter-data-analysis-cec/index.html
There’s a major detail missing from many conversations about the rising number of migrants coming to the US-Mexico border.

Decades ago, the vast majority of migrants attempting to cross the border between ports of entry were Mexican. A few years ago, most came from the Central American countries known as the Northern Triangle: Guatemala, Honduras and El Salvador.

But now, according to Border Patrol statistics, the number of people coming from outside those places – from countries such as Cuba, Colombia, Nicaragua and Venezuela – is growing fast.

metmike: Word is out in the poor countries. The United States is the place to go. Who can blame them for wanting to come here? They're leaving behind a crummy existence and potentially getting a great reward. Even substandard  living conditions in the US are a step up for these people.

Of course they will keep coming in increasing numbers. Why wouldn't they?

If it was you or somebody in your family that was born surrounded by poverty and very limited opportunities but made something better with your life by moving to a place with many opportunities............what would you call it then? 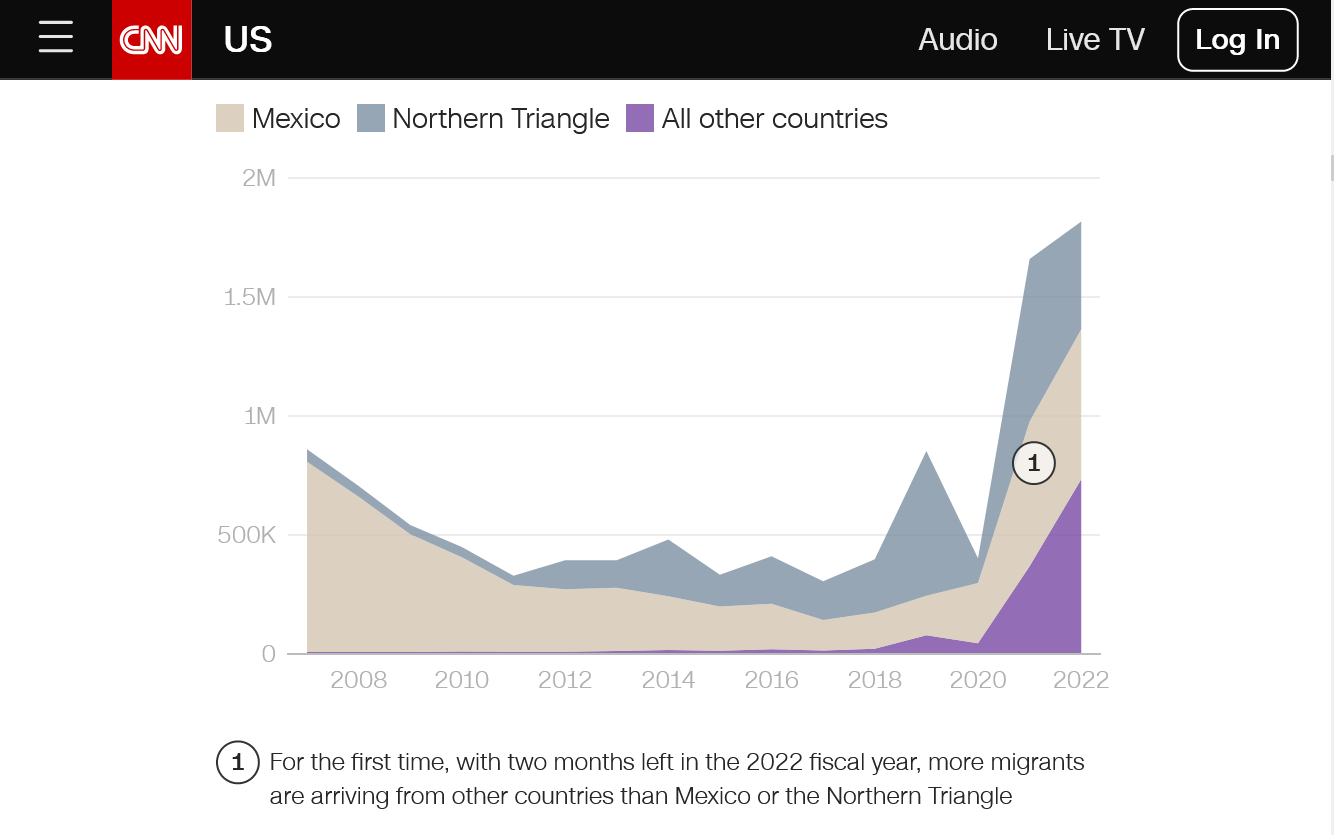 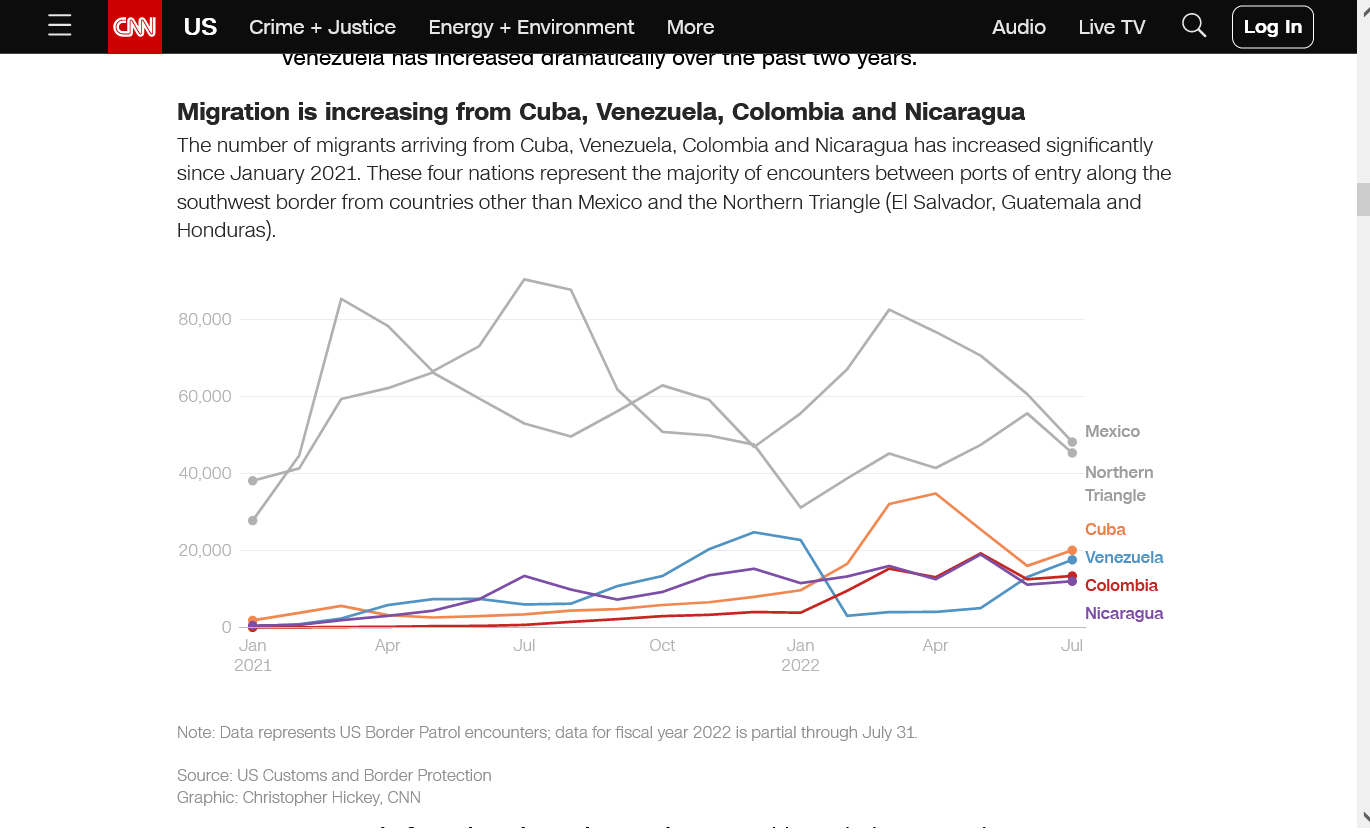 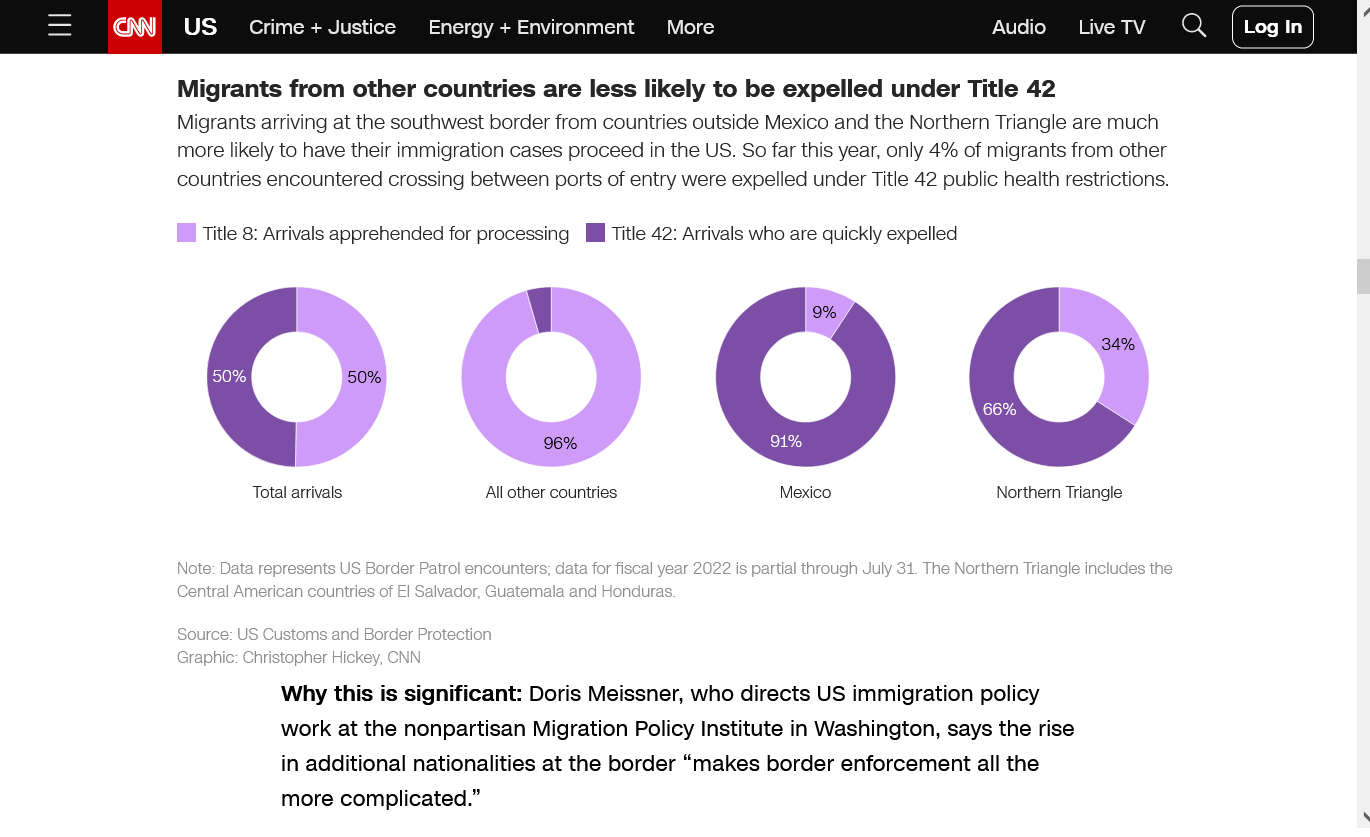 The people  from other countries is soaring higher because they know this. Again, the word is out and those numbers will just keep growing and there are over a billion people out there that would prefer living here instead of where they live now.

diverse immigration views? seem every big talking lib on Martha's vineyard wanted every illegal they could get. Even had signs posted all over the island.....   we welcome all it read.......until Desantis was the only one with enough backbone to call every lib hypocrite on their fake pronouncements.  Seems those illegals were to only last a few hours were this warm welcome was supposed to happen. Its a Texas, Florida, Az problem say those brace, big hearted libs.

Transportation of Venezuelan Migrants to Martha's Vineyard Under Investigation

“Out of desperation, a few governors along our southern border are now giving some Democrat-run states and cities just a tiny, tiny taste of what border communities have been enduring, literally, for years,” McConnell said on the Senate floor.

“These well-to-do blue enclaves are finally witnessing the smallest fraction of the challenges that open borders have forced on working-class communities all across our country.”

“All those cities combined have had months to accept, between them, approximately one day’s share of our nation’s illegal immigration. But the Democratic mayor of New York City is now declaring that his government’s resources are, quote, at a breaking point. … The self-proclaimed sanctuary city apparently cannot take it,” McConnell said.

New York City Mayor Eric Adams(D) has requested federal assistance after receiving more than 2,500 migrants since Aug. 5, and D.C. Mayor Muriel Bowser (D) declared a public emergency this month over the influx of 10,000 migrants since the spring.

The most ironic thing is that a year ago, the right was really upset about immigrants being bused north and the left was encouraging it..........the complete opposite of the current dynamic!

Catch-and-Bus: Thousands of Freed Border-Crossing Immigrants Are Dispersing Across America

Charters and Greyhound are delivering them where they want to go

DEL RIO, Texas — On a recent evening with the night ahead looking long, an idling charter bus parked on a lot prepared to disperse a new kind of import throughout the American landscape.

The bus and a small van nearby were packed with 60 or so mostly Haitian families fresh out of the Rio Grande from their illegal crossings.

After testing negative for Covid and other processing, the U.S. Department of Homeland Security had given them legal documents and released them to a local nongovernmental organization, the Val Verde Border Humanitarian Coalition, just blocks from the river in this south Texas border town.

For another day or so, coalition volunteers helped them arrange to wire in money for bus tickets and lodging in the cities to which the buses will take them. Like at least 20 other buses that had each carried 50 people in just the first three weeks of March, this one soon rumbled onto the long road from this Texas border town carrying happy, chattering passengers to new American lives in Orlando, Fort Lauderdale, and West Palm Beach in Florida, as well as Newark, N.J.

“They feel happy because they’re in the United States,” said Lorenzo Ortiz of the El Buen Samaritano Migrante church, who helps coordinate the daily bus rides from Del Rio to where the new immigrants say they want to go. “They want to get as soon as possible to their destination. They’re all going to apply for asylum. They’re all good people.”

A Vast Unseen Conveyor Belt from Border to Interior America

The buses rolling in a steady daily succession out of Del Rio — one charter a day, seven days a week, and before that weeks of filling Greyhound buses — represent a microcosm of a much broader aspect of the unfolding mass-migration crisis at the southern border that has attracted limited media coverage and occurs largely outside public view. Tens of thousands of immigrants caught illegally crossing the border and then released under the new leniency policy of President Joe Biden are now dispersing to four corners of the United States on buses, with some of the more moneyed ones taking passenger jets.

As best as the Center for Immigration Studies can determine from interviews and scattered media reporting, the buses are leaving regularly from Del Rio, the Texas Rio Grande Valley communities, and Laredo, but the busing also appears to be going on in Arizona, as well as in California.

Where are the buses going? They often drop their Haitian, Venezuelan, and Cuban passengers in Florida and New Jersey. Those from Nicaragua and other Central American nations have been delivered to Tennessee, Massachusetts, Indiana, Michigan, North Carolina, Georgia, Kentucky, and to large cities in Texas such as Dallas and Houston.

Most will likely use their time to apply for asylum, a lengthy, back-logged process that allows for work authorization and Social Security cards during an adjudication process that can drag on for years.

In Del Rio, at least, the immigrants are then dropped off at Burrow’s Val Verde Border Humanitarian Coalition. She and her staff of unpaid volunteers help the immigrants contact relatives or friends, figure out how to get bus fare paid or money wired in, and then the transportation part. Organizations like hers operate in other border towns doing the same work.

The immigrants have to pay the entire bus fare, Burrow said, and receive no government assistance for travel. Some arrive with some money. Almost everyone seems to know someone, a relative or friend, willing to wire money or buy bus tickets and incidentals.

In the hectic early days, the Del Rio group tried to arrange for Greyhound buses to take the immigrants to bigger city bus stations in San Antonio, Dallas, or Houston, where the travelers could transfer to other buses going their way. But there weren’t enough guaranteed bus seats in the local commercial fleets here and in San Antonio, 130 miles away, to meet demand, Ortiz said. So at least in Del Rio, dedicated charter buses were arranged after enough immigrants declared an interest in traveling to a particular region.