The expanding drought in October will become a weather market at some point during that month, without substantial relief:

The U.S. #corn & soy harvests are not moving as quickly as analysts expected in the early stages. Corn at 7% and #soybeans at 3% is a bit behind average, not surprising as planting was a bit late, too. Spring #wheat harvest is almost complete and winter wheat has begun emerging. 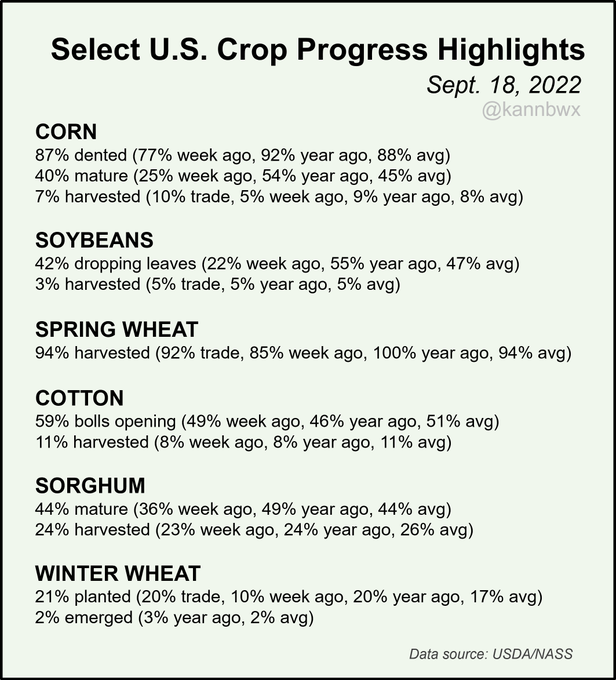 metmike: The slow harvest on corn could relate to producers wanting to let crops completely dry down in the field and expectations that prices are going higher and not wanting to beat the upcoming harvest pressure, as early harvesting often does.

I'm just speculating. Others should chime in with their thoughts.

In my area a slightly late start to planting and maybe a little effect form lack of rain late July and August, has the crop a little later than normal. I also expect harvest to be late finishing as a lot was planted 1st week of June. late beans still dark green here.

Yes, drying corn is a concern. corn normally dries well here till about 3rd week of October. After that very slow to dry.

Temps in your/our area were pretty close to average this Summer but in the WCB and Plains they racked up some big GDD's(GDUs) that matured the crop  faster than usual.

Of course this will depend on the variety/hybrid. Producers, please chime in with additional information to enhance our understanding!

R6 Stage. The kernels continue to gain weight until black layer formation or physiological maturity (55 to 65 days after silking/approximately 2700 GDUs) occurs. The black layer forms where the kernel attaches to the cob. Kernel moisture is at 30 to 35 percent.

You said that you planted the first week in June, cutworm. Wow, thats very late for planting corn in  our area.......actually any area.  Did you use a shorter season variety and what was the maturity date on that, please?

Is it Time to Switch Corn Hybrid Maturities?

If wet weather has kept you from planting corn this spring, should you stick to your original hybrids or switch out to shorter season corn?

I picked a zip code of 47012 for Franklin County to get the GDD calculation.

Does this line up with what's going on for you cutworm?

How many GDDs does you corn need? 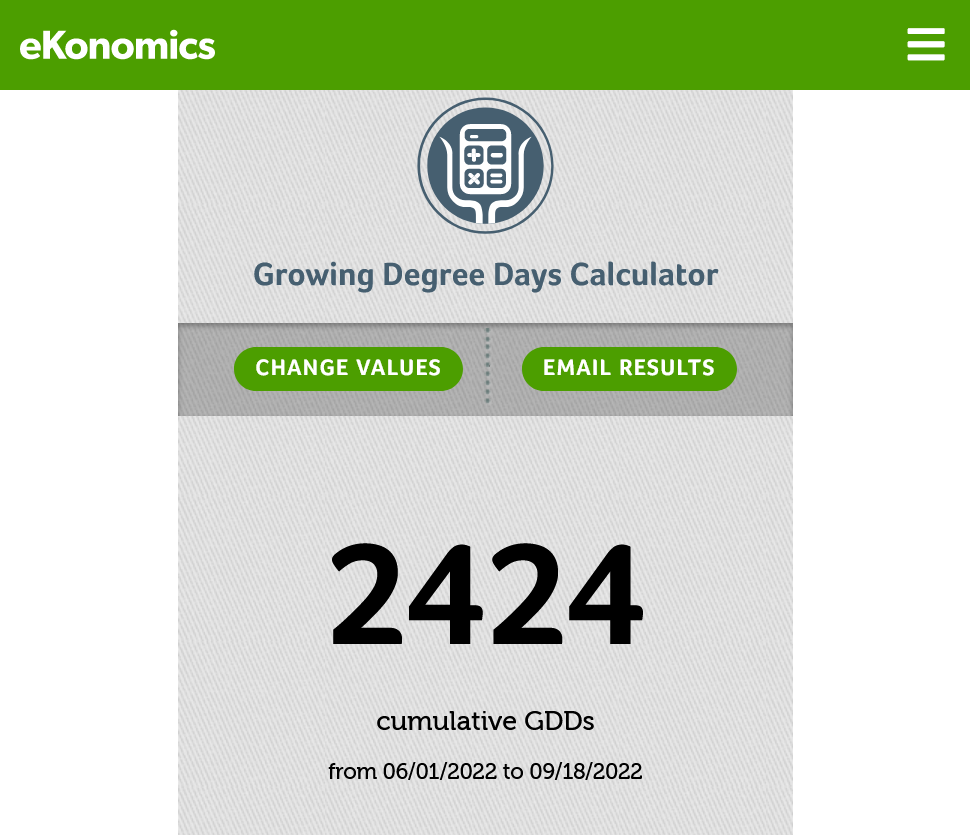 Another big negative factor I should mention(as a scientist) related to late planting that I don't remember reading/discussed anywhere and is independent of GDDs.

Corn plants, use their leaves to intercept the photon energy in solar radiation for development, then yield.

The suns angle and power peaks on June 21st. The strongest sun is 30 days before and 30 days after that........May 21st to July 21st. This is the 60 day period, when the sun has the most photon energy which can be intercepted by the leaves.

Corn plants with well developed foliage by May 21st, will be able to gobble up that photon energy during this entire 60 day maximum period.

The 120 day period with maximum energy coming from the sun (in the Northern Hemisphere) is April 21st to August 21st.  You absolutely want to have your corn growing during as much of this period as possible.

Besides the more powerful sun based on the higher angle, the days are longer during those time frames which adds to the extra photon energy that the corn leaves can intercept/absorb.

The later that corn is planted, the more of the strong sun with longer days early in that period that gets wasted and are replaced with a weaker sun and shorter days after June 21st.

This is a good discussion that touches on that topic: metmike: There are some key things to note on the map above. Go to the link for better visibility.

1. Because of the higher sun angle and longest days of the year,  June has higher values than July in much of the Cornbelt(even though July weather is hotter). July is higher in some locations of the Northwest because of sunnier weather in July/more clouds in June.

2. May is decidedly higher than August everywhere.......even though August is much hotter and causes much higher GDDs/Heat Units.

3. April is MUCH higher for solar radiation than September, even though September is MUCH warmer by a wide margin.  Planting corn in April is risky in much of the Midwest. Wet/cold soils cause poor/uneven germination and a bad start which is not worth it in many cases to capture the additional sun power.

4. These maps were created for greenhouse growers, especially because the amount of sunshine available in Winter is wimpy and plants need additional radiation from indoor grow lights to do well.

There are other considerations but this just shows the amount of potential solar energy available/month based on historical averages.

Mike i should be a little bit better at communication.

I actually started planting corn April 28 but did not finish till May 28th . I normally try to start as soon as April 10th. I can't remember the exact GDUs , but plant mostly 113  day corn with one field 117 day. No I did not use shorter day than normal. Because of very little soil moisture in August and then getting 4+ inches 8-21 thrugh the first week of Sept. The longer day but late planted has a chance at better than I would expect yield for the planting date.

Corn is drying but normally don't harvest my corn till 2nd week of Oct. May 28th planted still has not black layered        (kernal stops growing at this point. still 40 to 50% moisture) needs to be dried to 15% Good drying days ahead till 3rd week of Oct. Some farmers will start to harvest at 28% and then dry. Not me.

I was able to plant some beans 2nd week of May. finished planting beans June 6th. I normally plant some beans last week of April and into May. I use a lot of 3.9 maturity beans, some 3.7. All beans planted in June are still dark green. Early planted are yellow to dropping leaves.

I'm thinking yields will be down but not a disaster. Will not know for sure till in the bin.

This is just my farm and surrounding area.

Also I know GDU's are a good measure to maturity, but other factors also can slow down or speed up maturity, Like drought stress and solar flux.

Thanks for the great additional stuff, cutworm.

Your 2nd description for corn planting makes much better sense.

Over the weekend, I noted a huge disparity with our beans in Vanderburgh/Gibson counties.

Many fields dropping leaves. However, some were completely green still.

Plugging in the new dates for corn planted your way:

I'll have some good stuff on beans tomorrow.

Beans can get extremely tricky if the weather is messed up.

Agronomy: How to Check when Soybeans are Mature