CNN and others have been calling Hurricane Ian a 1 in 1,000 year weather event from the rain.

Suddenly, 1 in 1,000 year (rain) events are happening very frequently, thanks to the new terminology of the fake climate crisis's  narrative this year designed to defy authentic meteorology/climate history. It's done in order to convince people that none of this extreme weather was happening before climate change.

Actually, it was happening almost as frequently in many cases before climate change and anybody that takes a bit of time to fact check, looking at historical weather records   can clearly see that.

Hurricane Ian’s rainfall was a 1-in-1,000 year event for the hardest-hit parts of Florida

Radar estimates suggest well over 12 inches of rain fell in just 12 to 24 hours in a wide swath from Port Charlotte to Orlando. In some of the hardest-hit locations, Hurricane Ian produced 1-in-1,000-year rainfall, according to data from the National Oceanic and Atmospheric Administration.

A 1,000-year rainfall event is one that is so intense it’s only seen on average once every 1,000 years – under normal circumstances. But extreme rainfall is becoming more common as the climate crisis pushes temperatures higher. Warmer air can hold more moisture, which loads the dice in favor of historic rainfall.

Florida’s precipitation record for 24 hours was Yankeetown in Northwest Florida, which accrued 38.7 inches on September 5, 1950. This is also the highest known storm-total maximum related to any tropical cyclone which impacted Florida. Furthermore, it was also the second highest 24-hour rainfall total in the history of the United States and was the result of Hurricane Easy. It remained the national highest 24-hour rainfall record until Tropical Storm Claudette in 1979.

For those not familiar with Claudette:

This was also less than 50% of the record for wettest tropical cyclones.........see below, which was the same system (Hurricane Easy-1950) that STILL holds the 24 hour record by a wide margin.

List of wettest tropical cyclones in the United States

As climate change increases the frequency and intensity of heavy rainfall events in the U.S., NOAA may soon be updating its thresholds for what constitutes a 1,000-year rain event.

1 in 1,000 year rain events = Any extremely heavy rain event with excessive flooding and they are ALL caused by climate change because people don't have weather records to check in order for them to be held accountable for abusing weather/climate statements.

It even applies to events that take place as frequently as every 25 years!

Again, this is what applies:

We should keep in mind, the goldenrule of climate/weather extremes as stated by Cliff Mass below:

Considering the substantial confusion in the media about this critical issue, let me provide the GOLDENRULE OF CLIMATE EXTREMES. Here it is:

The more extreme a climate or weather record is, the greater the contribution of natural variability.

Or to put it a different way, the larger or more unusual an extreme, the higher proportion of the extreme is due to natural variability.

For every 1 deg. C  we warm the atmosphere, it has a 7% increased capacity to hold moisture based on the Clausius-Clapeyron equation.

The Clausius–Clapeyron relation, named after Rudolf Clausius[1] and Benoît Paul Émile Clapeyron,[2] specifies the temperature dependence of pressure, most importantly vapor pressure, at a discontinuous phase transition between two phases of matter of a single constituent. Its relevance to climatology is the increase of the water-holding capacity of the atmosphere by about 7% for every 1 °C (1.8 °F) rise in temperature.

However, the oceans have  warmed a bit less than that so the amount of  extra precipitable water in a hurricane like this, is probably on the order of +5% because of climate change. All things being equal, that would add 5% more rain to the totals of a hurricane like Ian.

That means that this same system 100 years ago, when the Gulf of Mexico water temperature was slightly cooler would have caused a maximum of 17 inches instead of the isolated 18 inch maximum amounts we saw this time...........an inch of extra rain because of climate change.

Climate change did not cause the event.

Climate change did not double the rainfall.

That's the authentic science. If you are reading/hearing something much different...........it's not based on sound meteorological principles and must have a non science based source. It's what we call DISinformation, even if it's mainstream.

Ian was absolutely a deadly hurricane and this was devastating flooding. We should feel compassion and try to provide assistance to those that have been harmed/are in need right now.

However, the blatant exaggerating of every extreme weather event and blaming it on a climate crisis is using these events to promote junk science and political agenda which is an independent objective from helping these people.

I would be cool with describing this event as 1 in 100 year flooding in Florida and some of the other places this Summer that had major flooding.

We just need to stop the way over the top, intentional abuse of communicating weather and climate using wild, creative  embellishment.

Previous threads on this:

Actually, Hurricane Irma, just 5 years ago-2017 was WETTER THAN Ian!

Here's some nice graphics on Irma, including an awesome radar loop:

These were rains from Irma below.

Massive area of 10+ inches that included much of the area from the southern border to the northeast border.  50% of the Peninsula. 3 isolated spots with more than 20 inches. 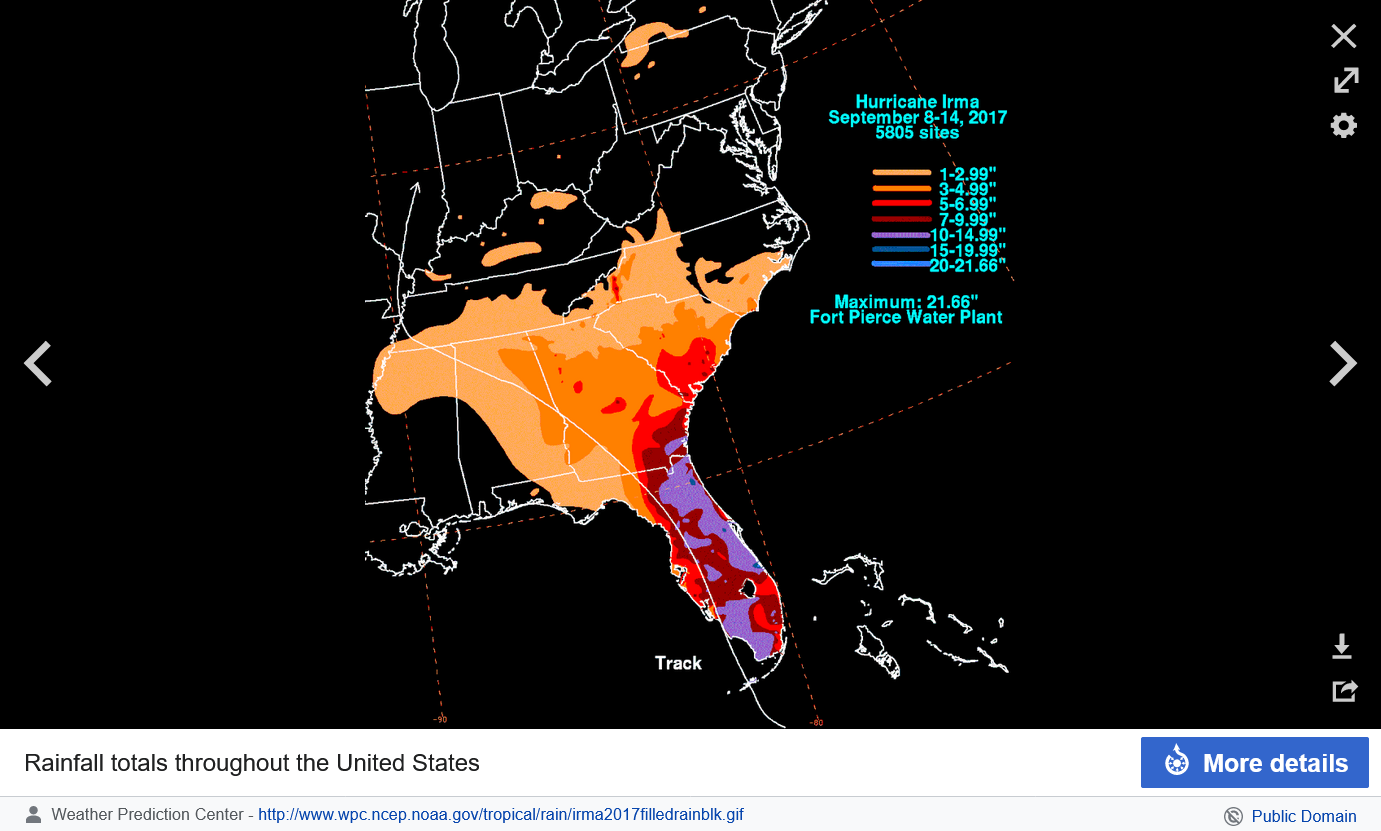 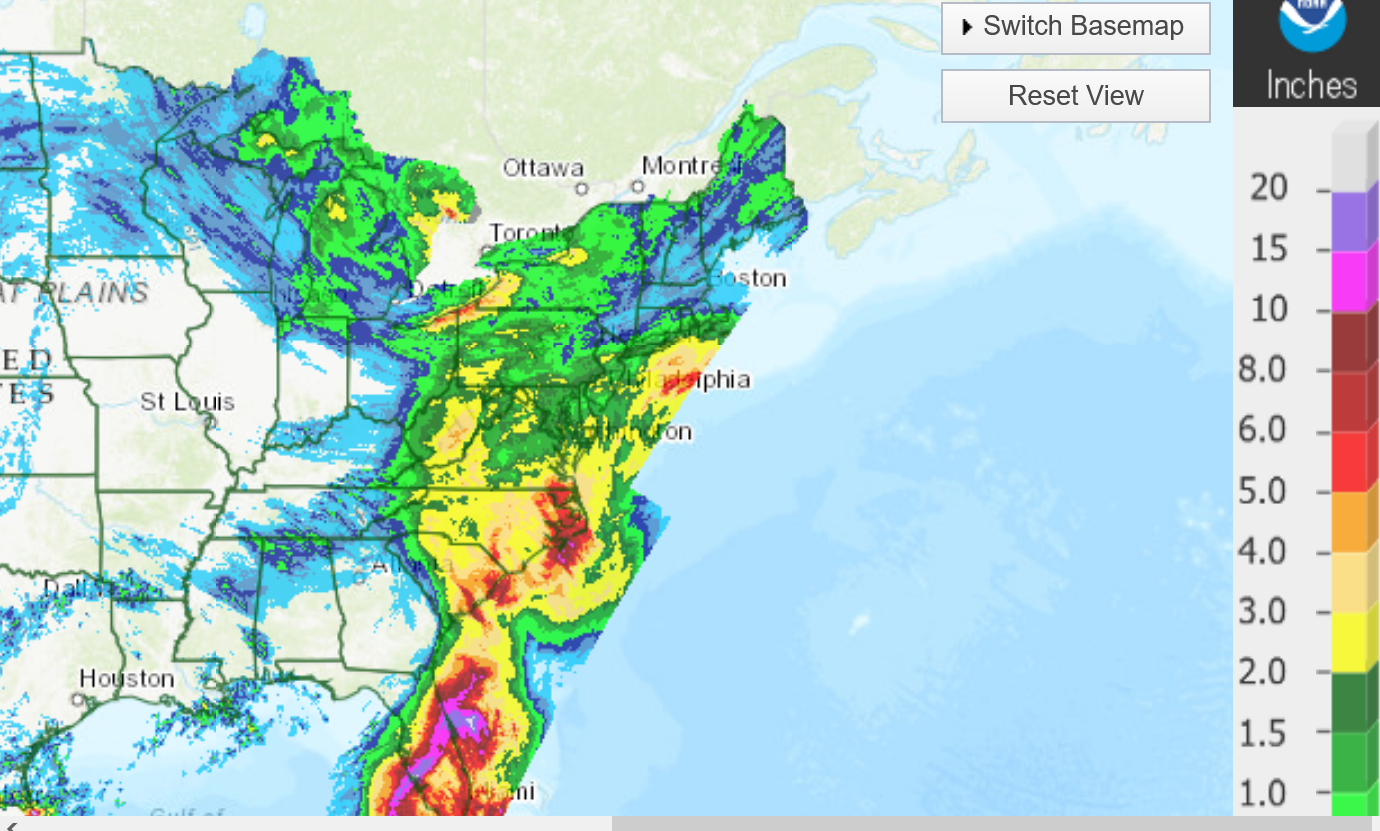 Scroll up for previous posts.

Now that we've shown you other events similar to and even exceeding Ian's rains in my life time(and I'm not 1,000 years old) ......one that was even greater than Ian, just 5 years ago, let's show the way that they exaggerate the science which turns it into JUNK science.

Hurricane Ian’s rainfall was a 1-in-1,000 year event for the hardest-hit parts of Florida

CNN: A 1,000-year rainfall event is one that is so intense it’s only seen on average once every 1,000 years – under normal circumstances.

metmike: When those previous events, similar to or exceeding this occurred, they were not referred to as 1 in a 1,000 year events. That's because the expression "1 in 1,000 year event"  came into favor suddenly to be used as a political term to sensationalize extreme weather that has been happening, in many cases more like 1 in 50 years or even 1 in 25 years, like the heavy rains in Dallas:

This is similar to how they used the polar bear for a global warming mascot......threatened with extinction........then, from 2005+, the polar bear population increased 30%.

Hurricane Ian’s rainfall was at least 10% wetter because of climate change, according to a rapid analysis released Thursday by scientists at Stony Brook University and the Lawrence Berkeley National Laboratory.

The analysis used the same methodology as a recent peer-reviewed study that looked at the influence of climate change on the 2020 hurricane season.

Michael Wehner, a senior scientist at Lawrence Berkeley who ran the analysis, noted that the physical relationship between air temperature and water vapor would suggest that Hurricane Ian’s rainfall should have only been around 5% higher due to climate warming.

metmike: I explained the  physical laws and gave an example to illustrate that legit 5% number here:

But the authentic 5% isn't enough to sensationalize events like this...........so they have to conjure up some junk science using modeling or other methods to make it "at least 10% wetter"

The climate crisis is supercharging rainfall in hurricanes, scientists report

The rainfall from hurricanes during the deadly, record-breaking 2020 season was as much as 11% higher because of the human-caused climate crisis, scientists reported Tuesday.

This work makes use of the hindcast attribution method with the Community Atmospheric Model, version 5 (CAM)10,11,15

metmike: Color me with the same amount of skepticism as with the global warming models that have doubled the real/observed warming..........but continue to NOT be adjusted because they are key evidence for a fake climate crisis NOT SCIENCE. And the polar bear models that have been  predicting that polar bears would die off with melting ice.........even as the polar bear population INCREASED 30%......and they don't get adjusted.

Models that never get adjusted to the observations/empirical data which contradicts them are based on political science(junk science) not authentic science.

This is not to say that Ian was not a very deadly,  catastrophic storm but we have to present honest science about what the actual elements of the storm were.

The most extreme killer element to this storm was the storm surge in combination with the heaviest rain in that location. Many people did  NOT evacuate along the coastal areas because the hurricane had been predicted to go farther north and be weaker at their location. So they rode it out and with dire consequences when the  record storm surge hit very unexpectedly.

In addition, the storm surge backed up rivers that were flooding from the heavy rains and made the river flooding worse much worse.