These 7 crimes in NY city from 2000 to 2021 are ALL down and some are down sharply.  But you wouldn't know that from reading articles in the media or listening to bloviating politicians (Republicans).  21 years trending lower.  Granted, there has been an uptick in 2022, but nothing like the hysteria we are hearing.

What's the saying in the news room?  If it bleeds it leads.  Their job is to sell news.  And Republicans playbook is always make people afraid.

https://tennesseestar.com/2020/06/26/democrats-run-americas-top-20-crime-ridden-cities/   right, just don't know how these crazy stories get started about high crime in lib run urban areas. Here ya go right down to your odds of being a victim

Here's the data on violent crime. 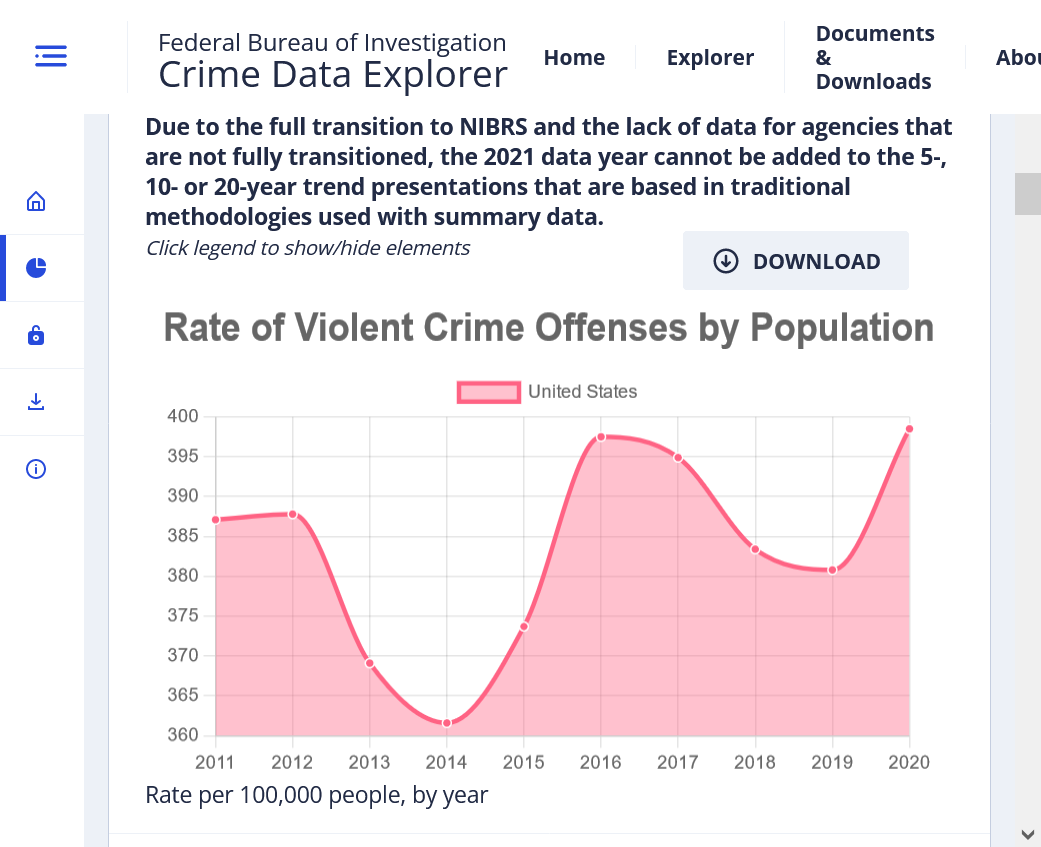 The 2021 crime report is a big mess because the methodology was drastically changed and not able to be used compared to previous reports. They changed how they compile data and only half the agencies reported.

Many midterm races focus on rising crime. Here's what the data does and doesn't show

"We've really got this change in murder, which almost happened overnight and has been sustained for two years, and we're not able to measure progress against it or regression against it," he says, "Because at this really inopportune moment, our data collection has suddenly gotten much worse."

This year, the FBI changed the way it collects crime data — and many of the nation's roughly 18,000 law enforcement agencies were slow to get on board.

This is what I get from your link: 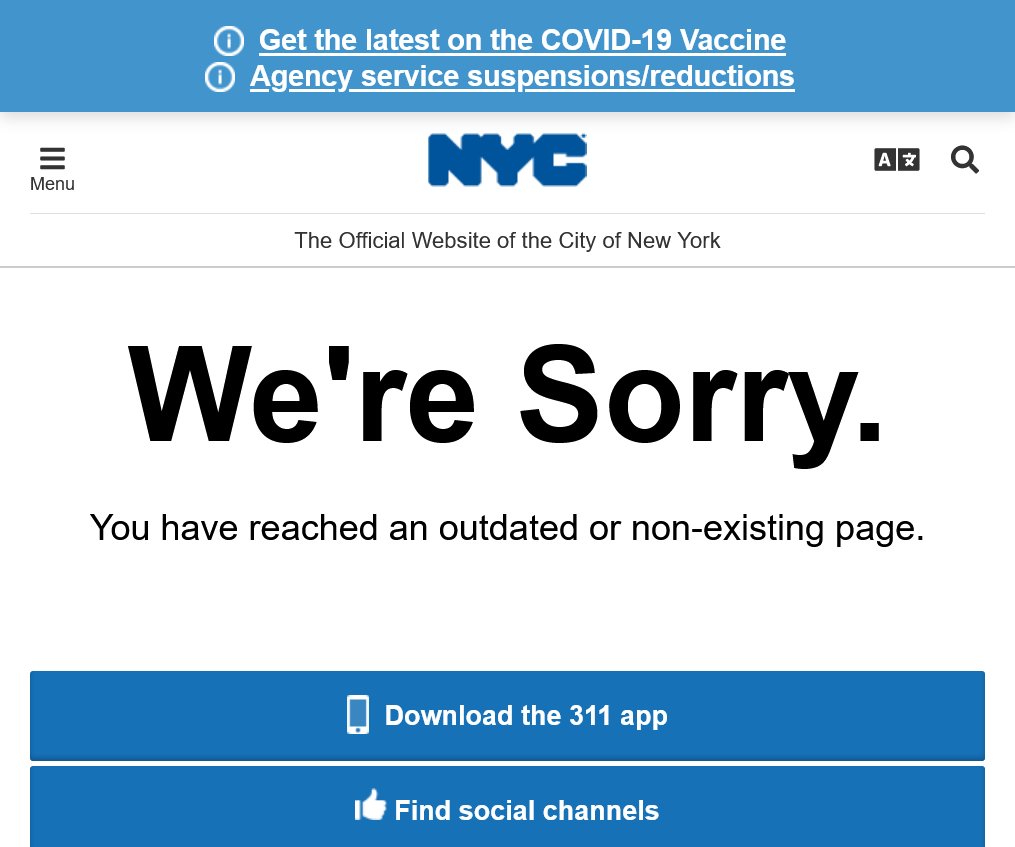 So there has been an increase in the last decade but that has come after a decrease the decade before that.

US crime: Is America seeing a surge in violence? 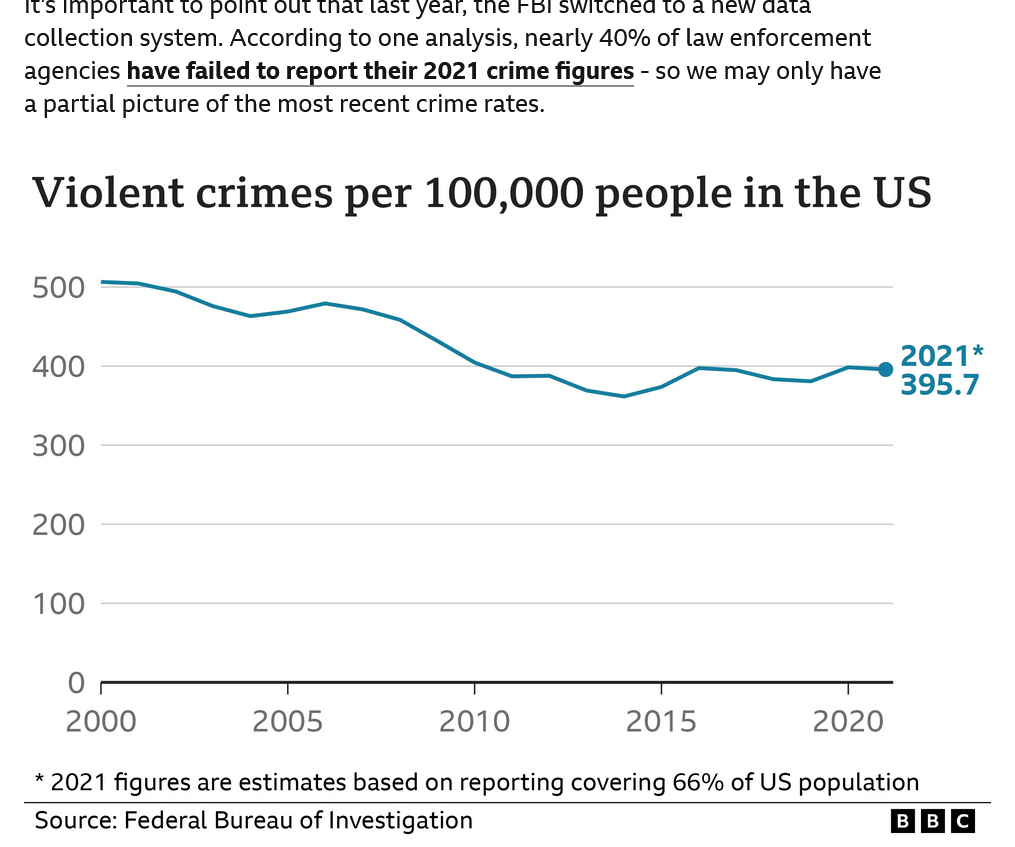 Then, you have reports like this.......that hand picked particular crimes that fell and ignored homicides in order to make it look like we're living in crime fighting utopia.

Violent crime is a key midterm voting issue, but what does the data say? 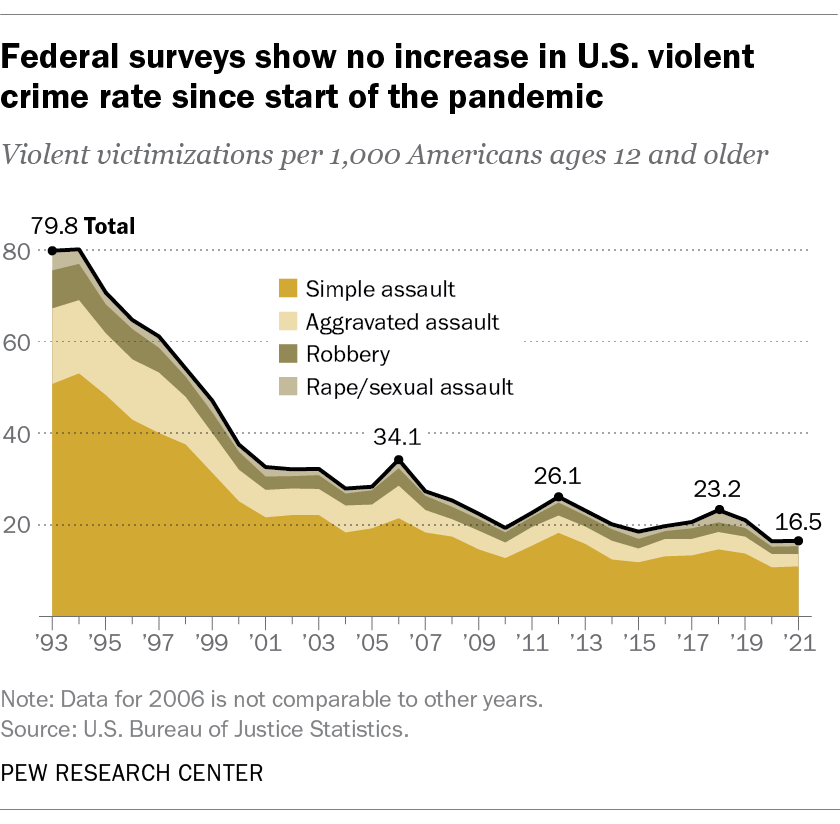 Here's some perspective on the homicide rate.

If this were a market that you were trading. What would this chart below be telling you? 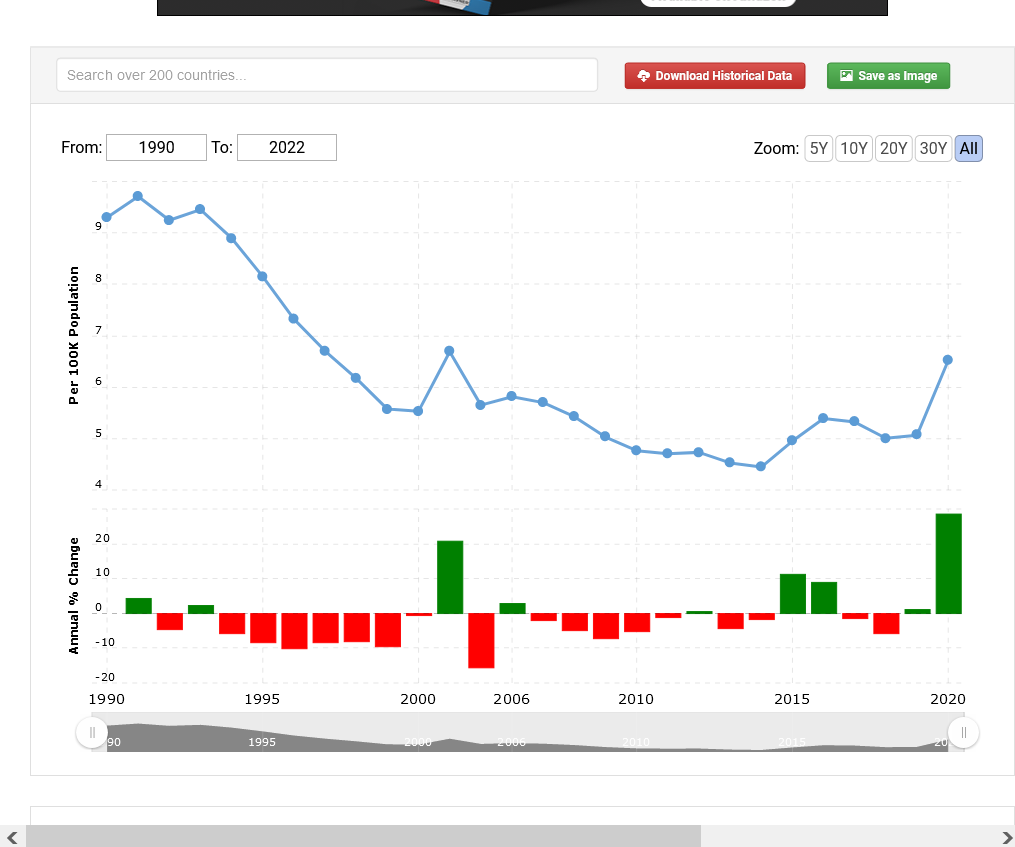 This was a gold mine of data: 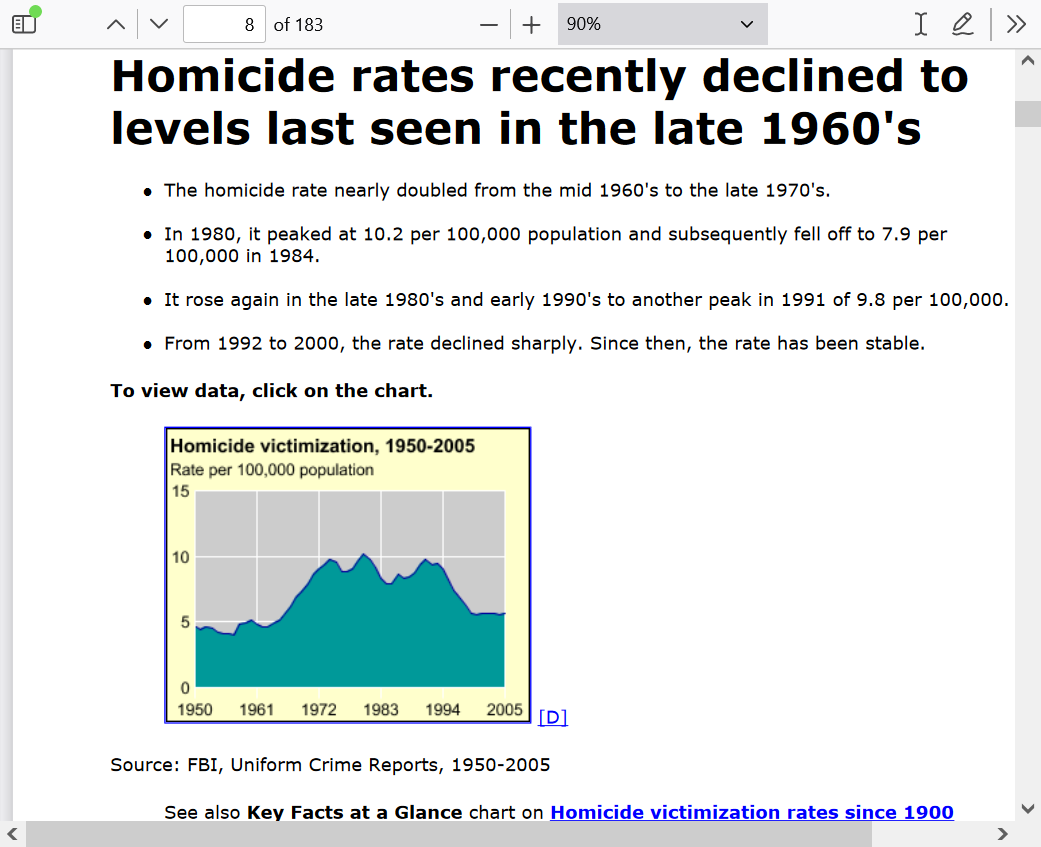 This shows  the period BEFORE the period before the previous posts/graphs.

I lived in Detroit in the 1970's, the "murder capital of the country" for several years.

We got the Detroit Free Press in the morning and News in the afternoon.

In 1974, late in the year when Detroit exceeded the previous years record homicides of 693-1973, the Detroit News devoted the entire space on the front page to a enormous number. The number of the new record cumulative homicides based on the added homicides the last day.

So once we got above 693, it might have been in November, there were no stories on the front page with the usual details. Just one massive number:

694 Sprawled across the entire front page

It was a powerful way to etch a message in people's heads that were just accepting it and treating it like another number.

Did it work?  It's 48 years later and I'm telling you this story but can't remember anything else in the news that year, so yes, it sunk in.

As other crimes would have spikes and lulls from year to year, homicide continued to be a “growth industry" in Detroit, as is explained in this special. In 10 years, the homicide total increased by a factor of five. 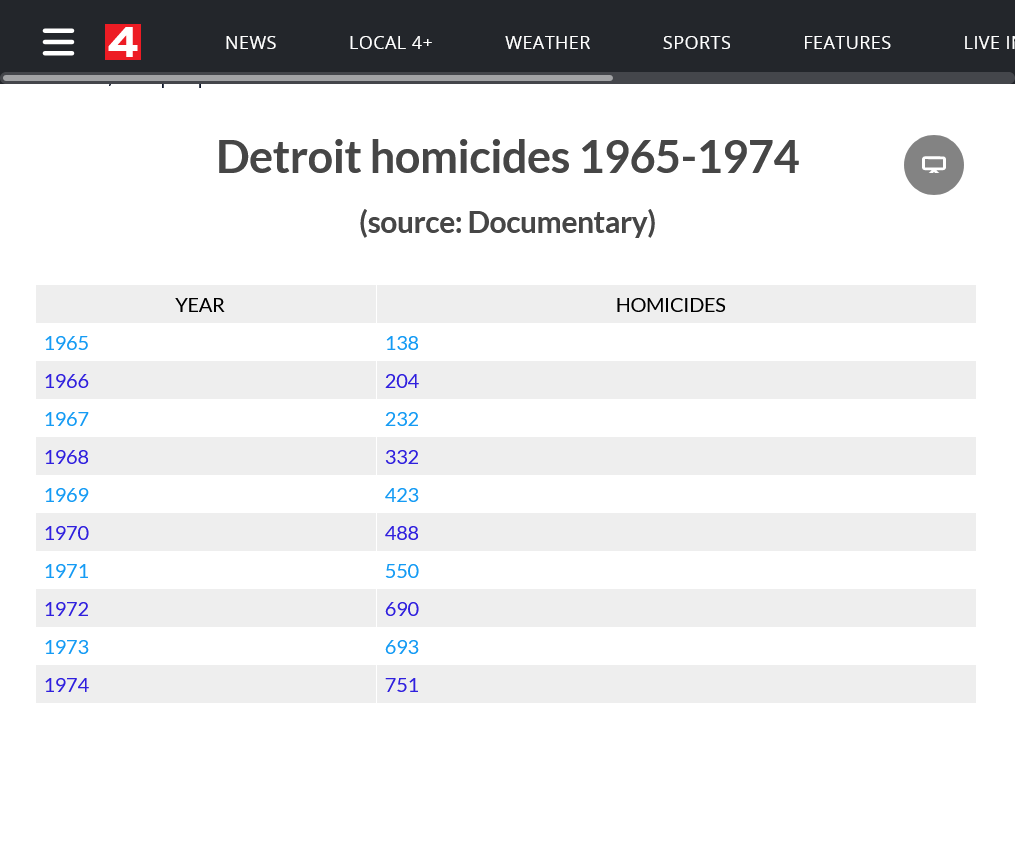 Another revealing data nugget(s) from that same link. This is related to the explanation for the much higher rate of confrontations between cops(that are mostly white) and blacks(that commit violent crime at a 7 times higher rate-homicides).

It's not the fault of the cops for doing their jobs. It's MOSTLY the result of the criminals.

Yes, accountability of abusive cops is absolutely needed but if they were robots and perfect if there were NO accountability or focus on positive changes in the black communities, the problem would be almost the same.

Ive advocated for an effective plan that has several elements to it here on numerous occasions in the past. 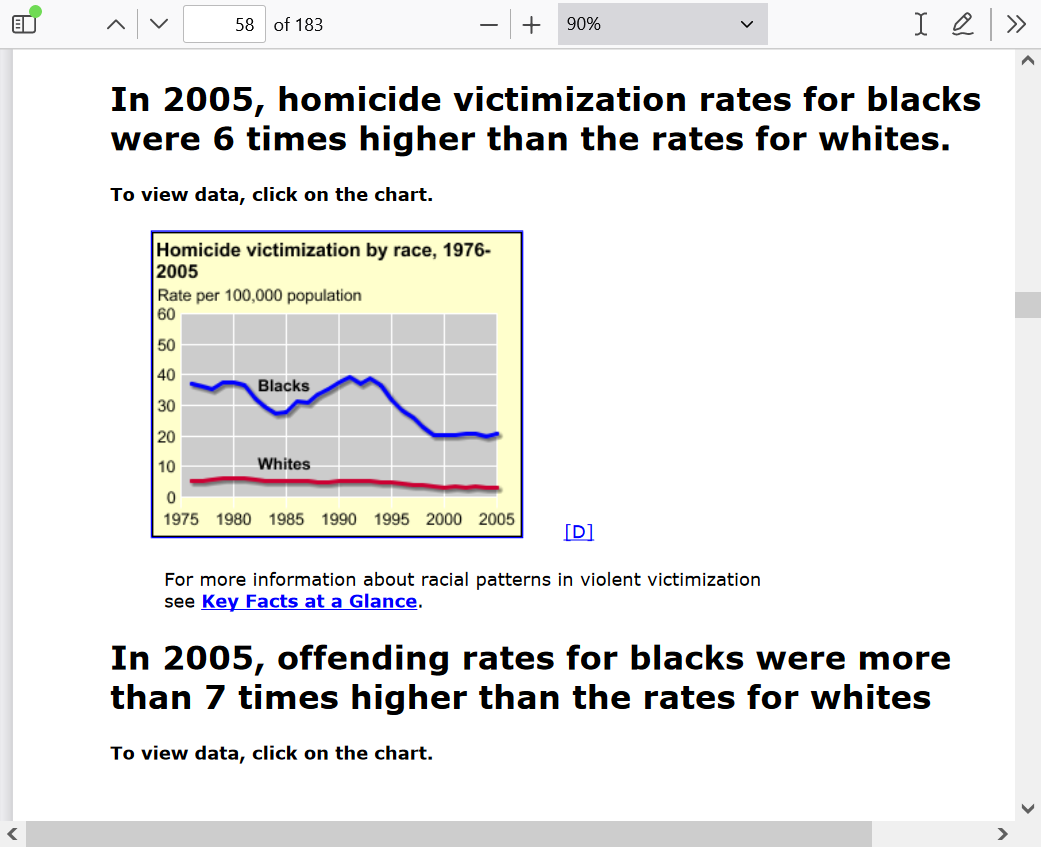 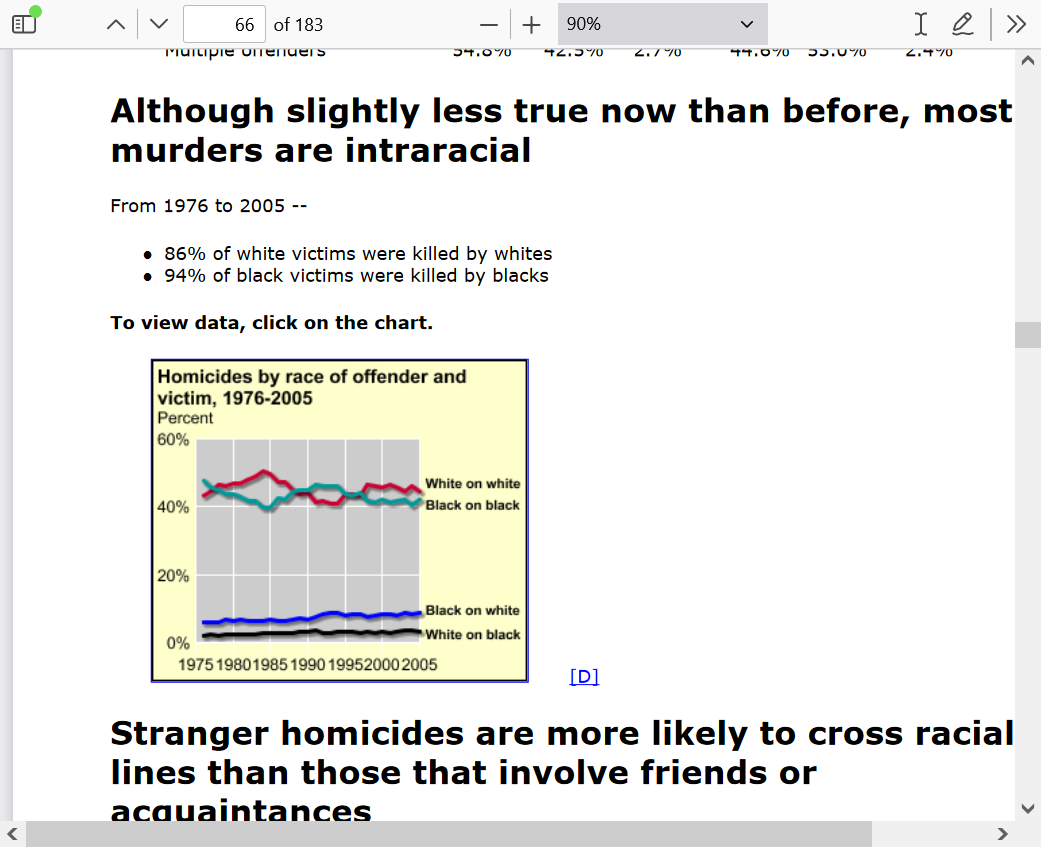 One of my favorite things to do is to expand topics into surrounding realms........which pop up when doing the research/homework/investigation on the original topic.

That's what popped up from the post just above this.

taking down the cops(good ones too)

But it only goes a small part of the way to SEE the problem as being the extremely high crime rate from blacks. One has to come up with solutions to address it and make it better, which can only be applied after acknowledging what the real problem is.

These have been some of my ideas.

Getting back to joj's original point:

21 years trending lower.  Granted, there has been an uptick in 2022, but nothing like the hysteria we are hearing.

This is correct about the uptick in 2022 and recent years and it not being AS BAD as the past.   Since joj's link won't work and he didn't provide a replacement, I'll do that.

This is the very recent crime spike in NYC that he's referring to.

However, compared to the WORST year, it's not nearly as bad:

Factbox: Despite recent uptick, New York City crime down from past decades

Official statistics show an increase in murders in the city in each of the past four years, but total numbers of murders were still far lower than three decades ago when crime in the United States crested thanks in part to the crack cocaine epidemic of that era.

April 13 (Reuters) - A shooting at a New York City subway station on Tuesday brought fresh attention to crime in the most populous American city, with 8.8 million people as of 2020, according to the U.S. Census Bureau.

Official statistics show an increase in murders in the city in each of the past four years, but total numbers of murders were still far lower than three decades ago when crime in the United States crested thanks in part to the crack cocaine epidemic of that era.

Here is a look at three categories of violent crime for selected years, based on New York City police statistics.

Here's the hysteria joj refers to:

He pointed out that shootings and homicides were up in 2021. making the decrease less noteworthy. 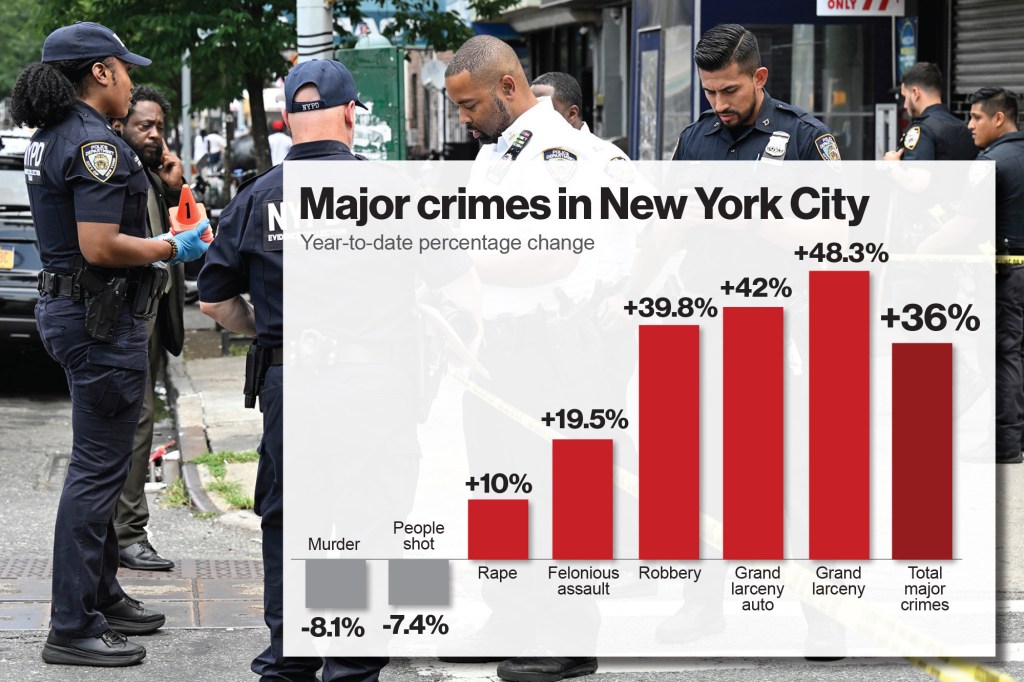 So the question is...........should we keep comparing this with when it was much worse in the past, as joj suggests or be seriously concerned because it's going the wrong way really fast?

The way to prevent it from getting as bad as it was in the past is to take powerful measures to reverse the extreme trend back upwards. You don't do that by NOT acknowledging it and claiming its not as bad............as 2000 or not as bad as the absolute worse year...........1990.

Taking that approach is the recipe for crime to return back to 2000 and 1990 levels.

There's obviously several complicating issues here and I'm no expert. With a roaring economy and extremely low unemployment rate, you would think it would be the complete opposite of this big spike higher in crime, so something is extremely wrong.

Has the mentality changed, not just with regards to enforcing of the laws but especially for criminals who feel empowered under this changed environment and different profoundly different mindset?

A good friend, Dave Wedding the sheriff in Vanderburgh County changed parties in 2020 from D to R, exactly because of this. I've known Dave for almost 40 years. He's THE  most honest, straight shooting NON political person I know of, including people not in politics. He looks at people as people not Ds or Rs.  When he ran as a D for years, he constantly made it clear that it was only because he had to pick a party to run and he's just as much for Rs.

Sheriff Wedding says the switch is to make a statement against what is going on nationally with civil unrest and negative attitudes towards law enforcement. He admitted that this will likely ruffle some feathers, but believes his track record in working with both Democrat and Republican leaders in the county will allow him to maintain those relationships despite the switch.

After the announcement, Wedding told us he feels the Democratic Party has lost its way.

“The Democrats represented hard-working individuals,” Sheriff Wedding said. “People who were just working class America and they believed in values, family and that you’ve got to work to achieve. I think we’ve lost that in the Democratic Party. I was one of the people who had nothing growing up and I’ve worked to achieve. I’m proud of where I was and where I am today.”

“Watching the daily burning of American flags, failing to be able to use the word God in any sentence at most Democrat-led functions, denouncing law enforcement as if we’re the evil people. I am very proud of my profession in law enforcement and when people attack us, it’s pretty insulting.”

So, does this have anything to do with the sudden jump higher in crime in recent years?

Do criminals commit more crimes when the MSM and dems(who are the party in charge right now because there were a majority of people that embraced their values) constantly bash cops/law enforcement. Deny the real causes of crime. Focus headlines on cops killing any blacks and ignoring the 1,000 times worse black on black crimes shown above. Have slogans like "defund the police" in 2020?

Is the Pope Catholic?

Does a bear defecate in the woods?

What's the saying in the news room?  If it bleeds it leads.  Their job is to sell news.  And Republicans playbook is always make people afraid.

Thanks, joj. I see that you have your D hat on this week.

What to know about eco-anxiety

Eco-anxiety refers to a fear of environmental damage or ecological disaster. This sense of anxiety is largely based on the current and predicted future state of the environment and human-induced climate change.

According to a 2018 national survey, almost 70% of people in the United States are worried about climate change, and around 51% feel “helpless.”

Anxiety around environmental issues may stem from the awareness of a rising risk of extreme weather events, losses of livelihood or housing, fears for future generations, and feelings of helplessness.

This article discusses eco-anxiety, including what it is, the common symptoms, and how to spot and manage it.

The Environmental Burden of Generation Z

"Kids are terrified, anxious and depressed about climate change. Whose fault is that?"

Children With “Eco-Anxiety” Are Being Seen By Specialists. Should You Be Concerned?

"Rising numbers of children are being treated for “eco-anxiety”, experts have said, as they warn parents against “terrifying” their youngsters with talk of climate catastrophe.

Protests by groups such as Extinction Rebellion, the recent fires in the Amazon and apocalyptic warnings by the teenage activist Greta Thunberg have prompted a “tsunami” of young people seeking help.

A group of psychologists working with the University of Bath says it is receiving a growing volume of enquiries from teachers, doctors and therapists unable to cope.

The Climate Psychology Alliance (CPA) told The Daily Telegraph some children complaining of eco-anxiety have even been given psychiatric drugs.

The body is campaigning for anxiety specifically caused by fear for the future of the planet to be recognised as a psychological phenomenon."

Ocasio-Cortez: ‘World will end in 12 years’ if climate change not addressed

Bernie Sanders: ‘Major Cities Going Under Water’ in ‘8 or 9 Years’ Due to Climate Change

No matter how low the crime rate has been it is still too high. Low rates don't mean much when you are the victim.