Analysts see possible growth in #Brazil's #corn & #soybeans for USDA's Thursday report, but a notable decline is expected for crops in #Argentina following the dry and hot weather. 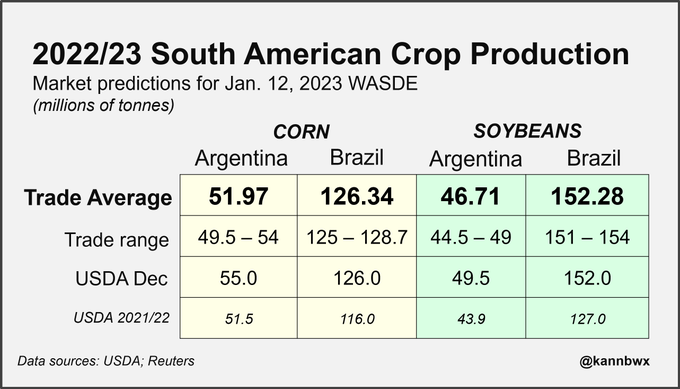 metmike: Weather conditions for corn/beans in Argentina have been some of the worst in decades. This USDA report will have major production cuts to Argentina, more than the market expects. 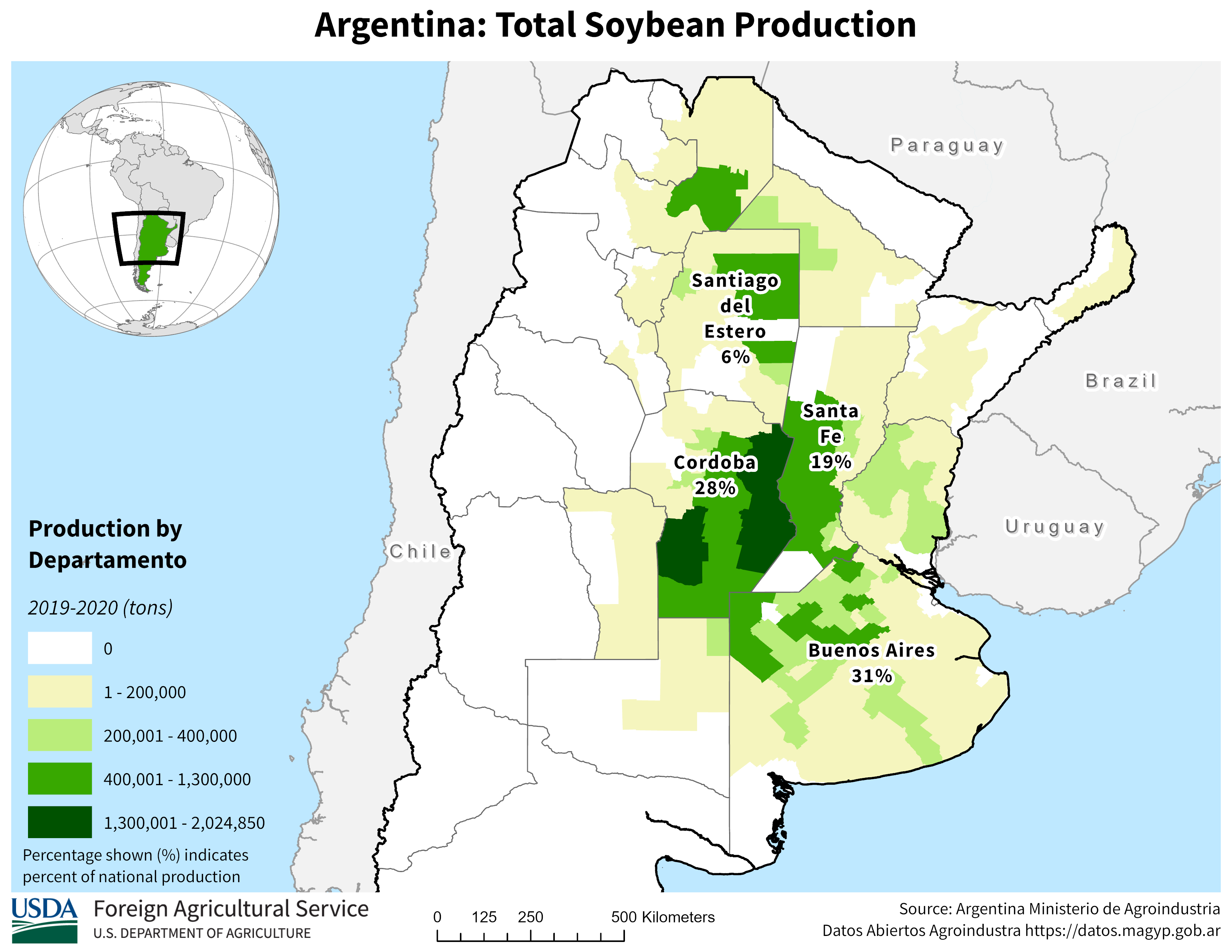 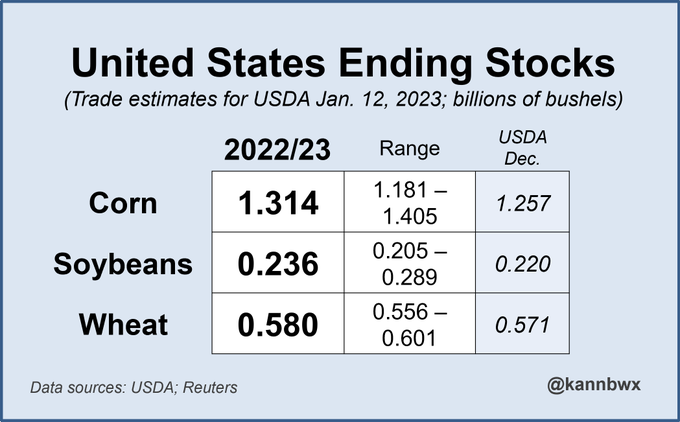 Analysts expect  for 2022 U.S. #corn & #soybeans in USDA's Thursday report. These crop changes would be historically small but not unprecedented. January numbers sometimes shock the market, but not last year. Trade has also guessed corn yield very well so far in 2022. 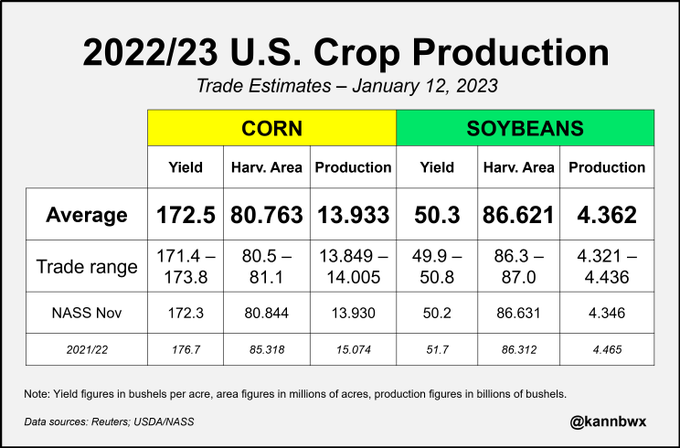 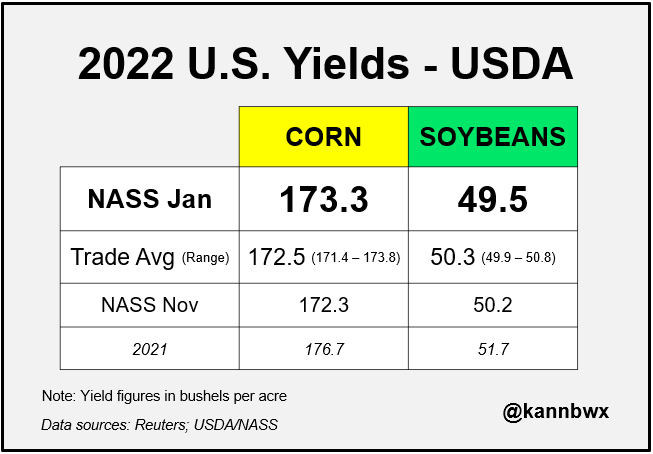 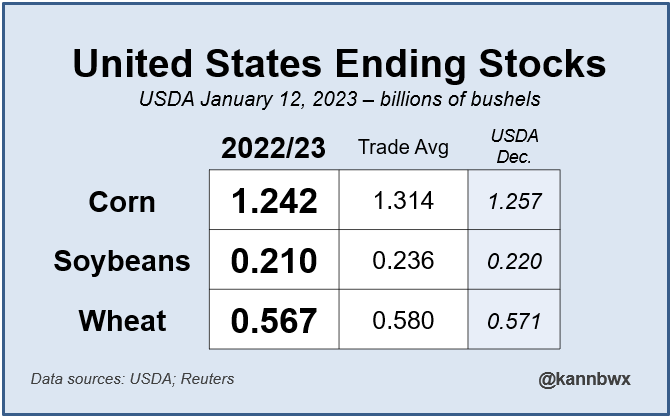 2022 U.S. harvests of #corn & #soybeans were smaller than expected. Corn yield was higher, but harvested area was much lower. Soy yield and area were both lower than expected. 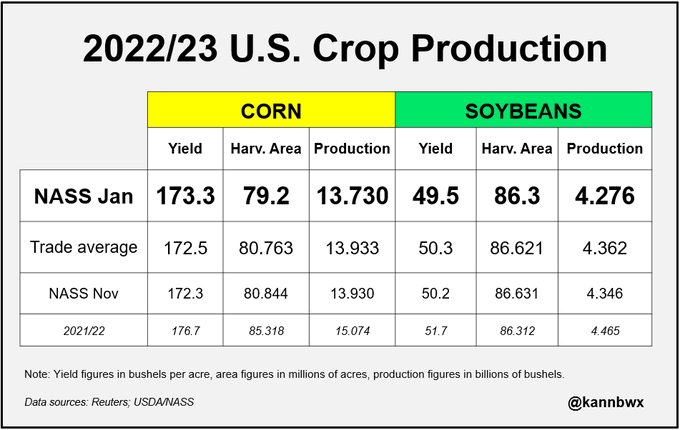 Conab reduced #Brazil's 2022/23 harvests of #corn & #soybeans, corn on a smaller first crop. Still are both easily record high. Old crop corn exports were +2 mmt from Dec, no mention of China in the text, though. Soy exports fell bc of higher competition from crush, which rose. 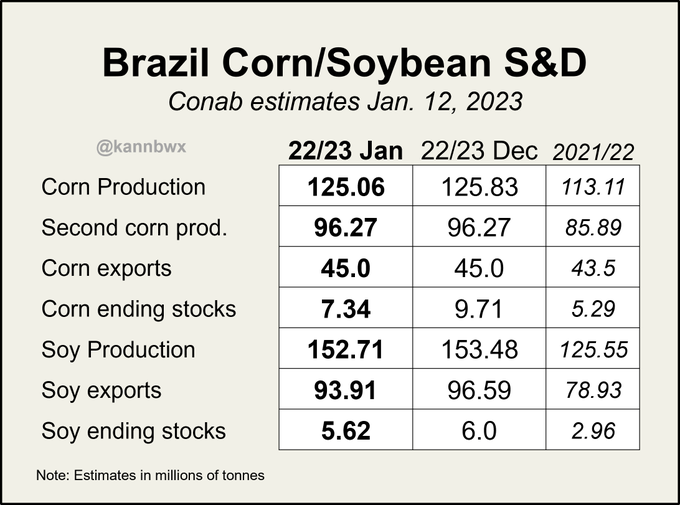 Still a lot of beans.  Doesn't look like I'm going to see that 160 mark

Thanks, Jim glad to read you back!

I’m always around.  Got myself a seasonal job to keep busy over the winter.  Little did I know there wasn’t going to be a winter.

We enjoy your comments a great deal, Jim!

I'd been mentioning for some time to look for the USDA cuts to Argentina production to be GREATER than expected and MUCH greater than the increase in Brazil production.

This ended up being only part of the bullish story with today's report. 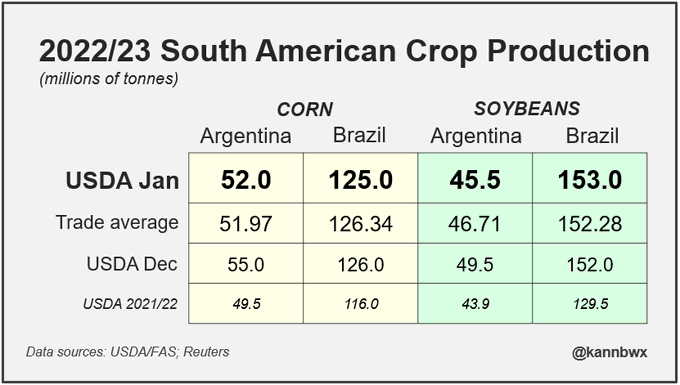 This was also pretty bullish for all the grains.

December 1 stocks of U.S. #corn, #wheat & #soybeans were all lighter than the market expected. This is a 9-year Dec. 1 low for corn, 15-year low for wheat, and 2-year low for beans. 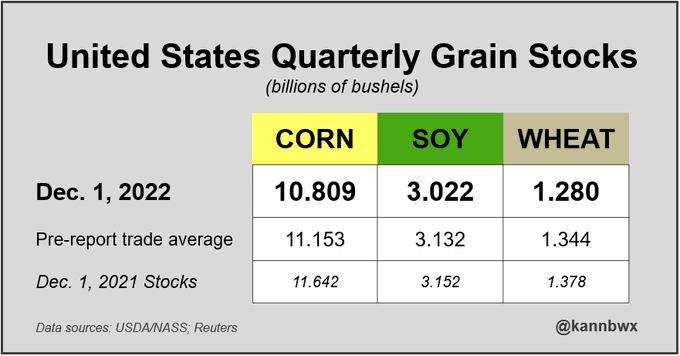 This part of the report.........NEW CROP wheat was VERY bearish! Huge unexpected increases in the amount of Winter Wheat Planted this past Fall. Considering the extreme drought in many area's, especially HRW-land, this is a shocker.

However, the last crop rating going into dormancy at the end of November? was horrible, close to the lowest ever because of extremely low soil moisture at that time. So the crop is NOT very well established. That extreme cold in December must have also caused some Winter kill to the crop.

But an improving soil moisture profile and wheat, known for having 9 lives and being tough can still recover nicely in the Spring.

Massive miss by the trade when it comes to U.S. winter #wheat area planted for the 2023 harvest. This is analysts' biggest miss on this report in 7 years, and the projected area near 37M acres is an 8-year high, up 11% on the year. 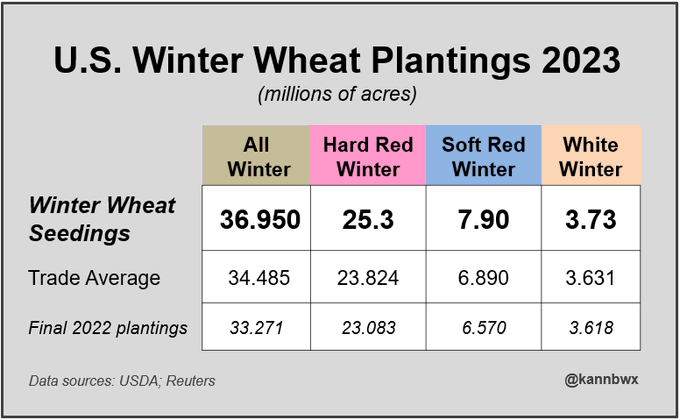 Another massive bonus for all crops, including wheat is the increase in CO2 a key component in photosynthesis.

The researchers grew wheat in greenhouses at normal (400 parts per million; ppm) or elevated (700 ppm) CO2 concentrations. The team found that wheat grown under elevated CO2 levels showed a 104% higher yield of mature grain. However, the nitrogen content of the grain was 0.5% lower under these conditions

So the false narratives associated with research like this that dominate headlines is that climate change/the increase in CO2 is causing our food to be less nutritional.

Let's demonstrate how this is a retarded, dishonest mindset.

Let's use this study as an example.

At an elevated 700 ppm, we have 204 units of production because of a 104% increase but only a 103.5% increase in nitrogen compared to the 400 ppm base case because that increase was not as great as the rest of the yield determining metrics.

So the headlines claim that climate change will cause wheat and other foods to be less nutritious because of tiny drops in micronutrients(like zinc and magnesium)  relative to the other increases basis.

The reality is that there was actually a 103.5% increase in nitrogen vs base case for CO2 but when compared to the 104% yield increase, they can claim it was a .5% decrease in nutrients.

So why don't we just drop CO2 back down to 300 ppm, which will greatly cut food production and crop yields and have a billion people starve to death..........so they can eat wheat with .5% more nitrogen in it.

Regardless, the world is experiencing the best weather/climate and CO2 conditions for growing crops and growing plants and the biosphere since humans have existed by an extremely wide margin.

Not despite climate change (fake climate crisis) but BECAUSE OF IT.

The authentic science clearly shows that we're having a climate optimum, not a crisis. 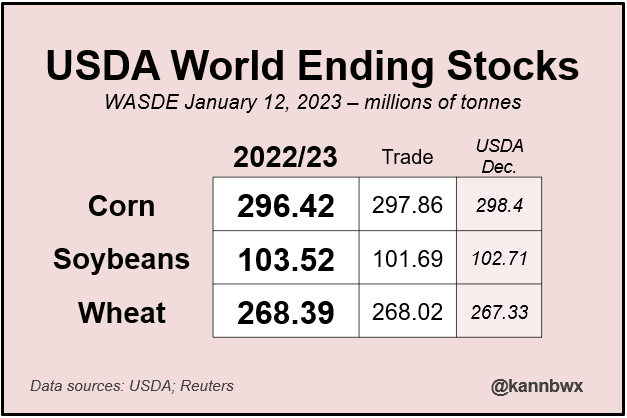 USDA sets 2022 U.S. #corn yield at 173.3 bushels per acre, down from 176.7 last year. New records for Illinois & Minnesota but a substantially more disappointing result in North Dakota (where area did not change that much). 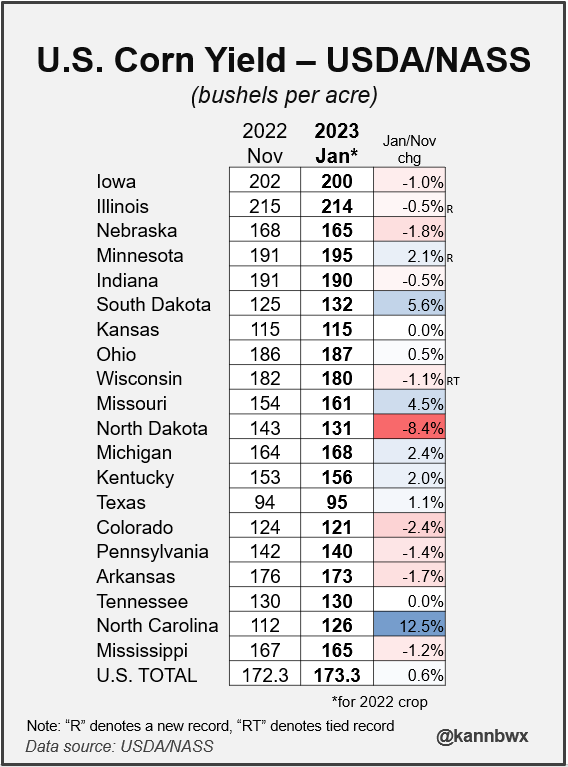 2022 U.S. #corn production was smaller than expected despite a higher yield. That's because harvested area fell by 1.6M acres from last estimate. Very strong connection between corn area losses and severe drought based on the state-level breakout. 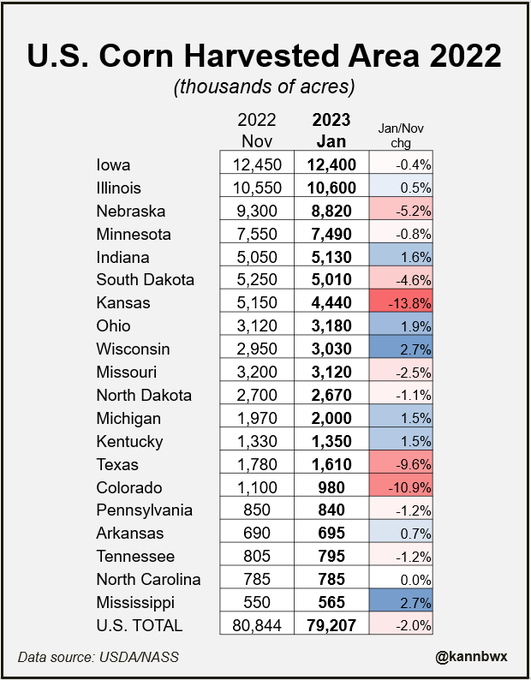 Largest recent January cut to corn harvested acres from the prior estimate that I see is 1.2M for the 2002 crop (also a western drought year). Same reduction was seen in 1998 as well. The 2022 reduction was 1.6M acres.

Yield for U.S. #soybeans hit a 3-year low in 2022 at 49.5 bushels per acre with many trims in top states versus the prior estimates. Arkansas is the only top state to pull off a new record. Nebraska's yield is a 10-year low. 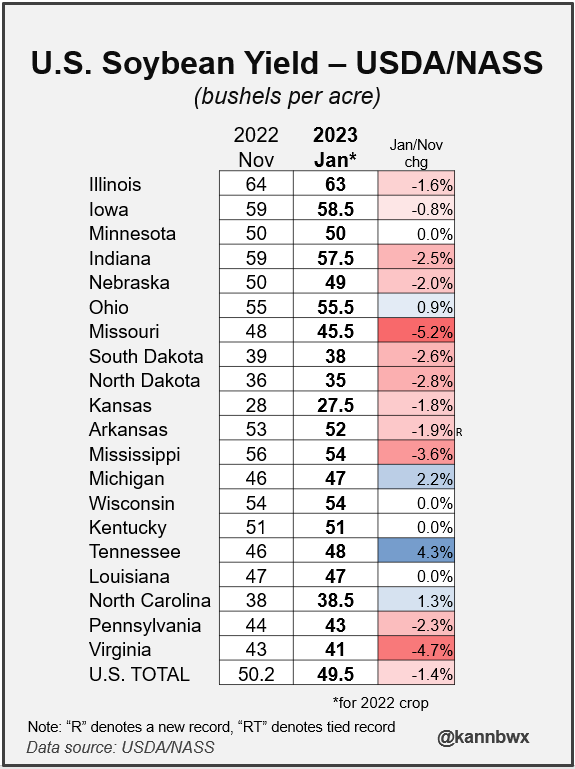 For the most part, soybean harvested area was very close to prior estimates, save a large drop in Kansas, which suffered from drought in 2022. 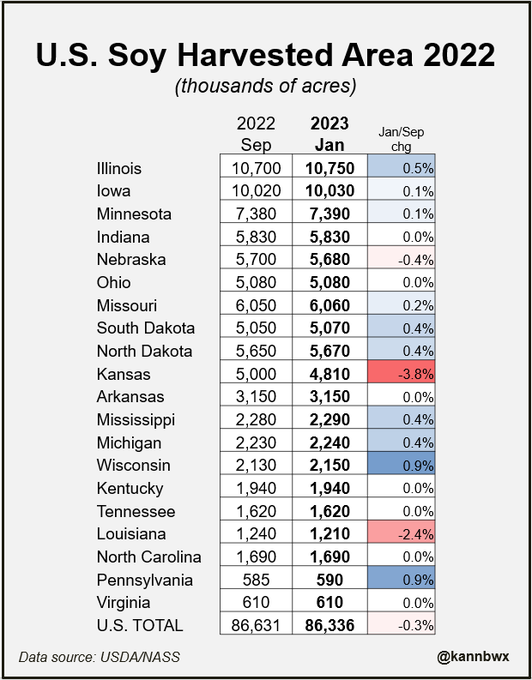 Texas accounts for 38% of the predicted rise in 2023 U.S. winter #wheat plantings versus last year. Oklahoma and Illinois are next at 8% apiece. New-crop wheat futures at the start of fall planting were at 10-year highs for the date, encouraging an 8-year high in winter acreage. 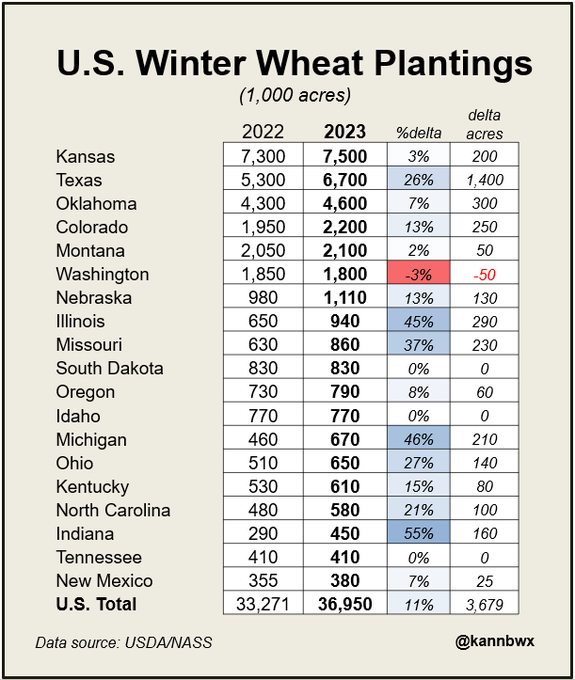 As of this week, some 59% of U.S. winter #wheat areas were covered by drought, the lowest since Sept. and down from a 75% peak in Nov. That is also lower than a year ago. However, 15% remains in exceptional D4 drought. USDA pegs 2023 winter wheat acres up 11% YOY to an 8yr high. 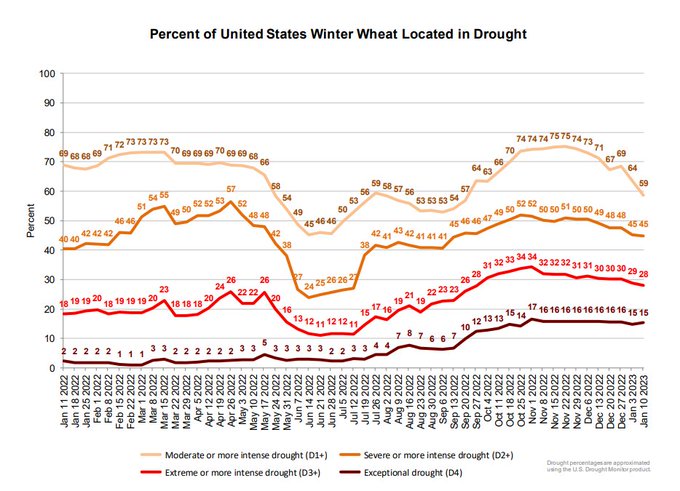 On average, neutral ENSO instead of #LaNina is expected to dominate the Feb-April period. Forecasters predict #ElNino as the most likely scenario starting with the July-Sep period, but the probability is less than 50% and it's just over 50% in Aug-Oct. 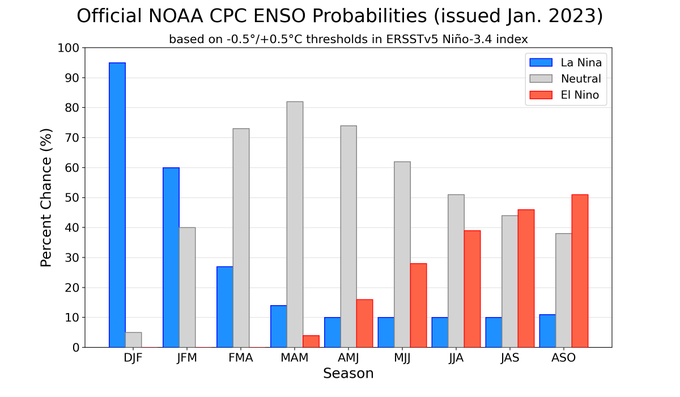 Neutral ENSO conditions dominating Feb-April does not mean La Nina or a La Nina-like pattern immediately vanishes on Feb. 1. Feb would probably be the most La Nina-ish month and April the most neutral month. Keep this in mind when thinking about the Argentine drought.

metmike: The ENSO reports on La Nina/El Nino from NOAA are an extreme lagging indicator. They base conditions on 3 month averages. By the time their reports indicate a change in conditions.........it's been going on for 3 months.

The West Coast getting bombarded by massive storms from an atmospheric river already tell us the atmosphere is reacting like an El Nino.

That's what we care about. What is ENSO causing the atmosphere to do and how is that impacting our weather.

In several months, they will report that the La Nina is officially dead by their very delayed metrics/standards of measuring. The atmosphere already told us that in January. This is also why rain chances are increasing in Argentina.

Today's USDA reduced the FL orange crop projection from the Dec report's 20 MB to 18 MB. The Oct report, which was based on pre-Ian damage, was at 29 MB. Thus, the FL crop has dropped from 29 pre-Ian to 18 now, meaning a decline of 38%. My prediction was that the % drop in the crop would likely be similar to that from Irma, which was ~1/3. The 38% means it likely will have at least met that expectation. It was already at 31% with the prior report. Typically based on past years, it takes several months to get the full damage assessment because of above average fruit droppage continuing for a number of months.

As we discussed previously, the thread to our discussion about that can't be loaded for some unknown reason...bummer!!!

I just tried again and as expected, got the same thing. 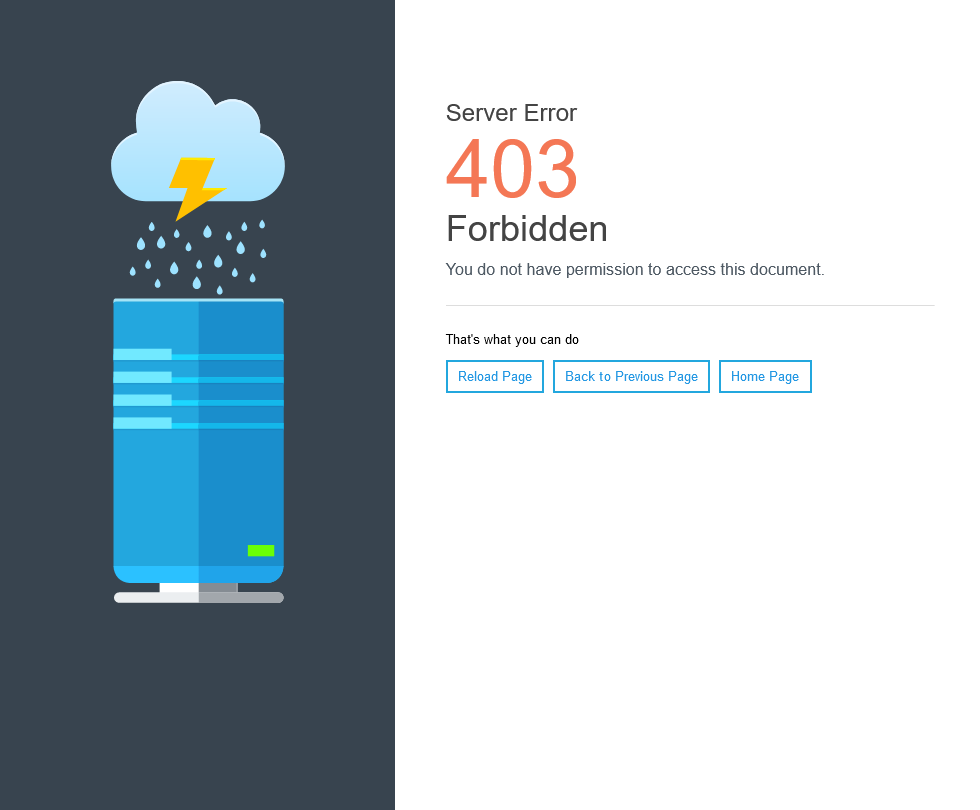