I agree strongly with Jim Jordan on this part of Fauci corruption.

The source of COVID, a Wuhan lab:

I also have disagreed with many things related to Fauci's mask information. They should have told everybody from the get go that only N95 masks were effective and not told everybody to NOT get N95 masks because they had to be saved for the health care workers that actually needed them most.

In other words.........use the cloth masks that have limited effectiveness and when we have the supply of N95 masks restocked, we still won't send them out to everybody because it'll be an admission that our recommending NOT getting an N95 mask was really bad advice.

People still walk around wearing a cloth mask all day thinking they're safe.

They continue to deceive us on the almost worthless cloth masks and instead of telling us the truth...........which is that only N95 masks work.

The biggest problem comes from the far right bashing Fauci for GOOD things that he did related to getting people vaccinated which saved hundreds of thousands of lives.

Fighting this authentic truth cost far right republicans many tens of thousands of lives. Ironically, killing themselves from ignorance and often a hate for Fauci.

Hate is the most destructive emotion of all.

It will cause you to do and say things that are harmful to you and your reputation when the hate becomes neurotic because you become so obsessed with harming the hated person that rational thinking no longer applies.

Your interpretation of circumstances involving the hated person becomes so blatantly skewed  that the hoped for endpoint in every realm is always for them to be hurt.

Hate blackens the heart and soul of the hater. It can ruin personal relationships and ironically, more often than not destroys the hater, not the target of their hatred.

This emotion drives the thoughts of many people when it comes to any issue involving:

With regards to Fauci........don't let the hatred for him and ignorance about COVID vaxx's define you.

With regards to hating Fauci, mcfarm I'm totally ok with whatever works for you and am not trying to change anything about you which would be impossible. Just calling a spade a spade and on this topic........a lesson about what hate does to people, while still agreeing with you on the original post but putting it into context:

defend this one MM

This was the quintessential example of what people who hate Fauci do:

defend this one MM

Millions of people on the far right that have never said a word about cruelty to animals or using them in experiments........suddenly became obsessed with this 1 experiment with beagles (shown repeatedly at Fox news) because they thought it could be used to vilify Fauci(there was no connection).

After Fauci was cleared, those same people went on not saying anything about cruelty to animals because their hatred of Fauci and wanting bad things to happen to him was what was driving their thoughts............NOT compassion for animals.

The NIAID rejected the White Coat Waste Project’s claim that the agency provided money to the study in Tunisia that produced the widely circulated photo of beagles’ heads in mesh cages.

"The manuscript mistakenly cited support from NIAID, when in fact NIAID did not support this specific research shown in the images of the beagles being circulated," the agency said.

The journal that published the study, PLOS Neglected Tropical Diseases, confirmed its mistake to MedPage Today. It also posted a correction online, writing that the NIH "did not provide any funding for this research and any such claim was made in error."

The NIAID said corrections will also be made to a database of NIH-funded research, which appeared to link the agency to the study and which the White Coat Waste Project cited. 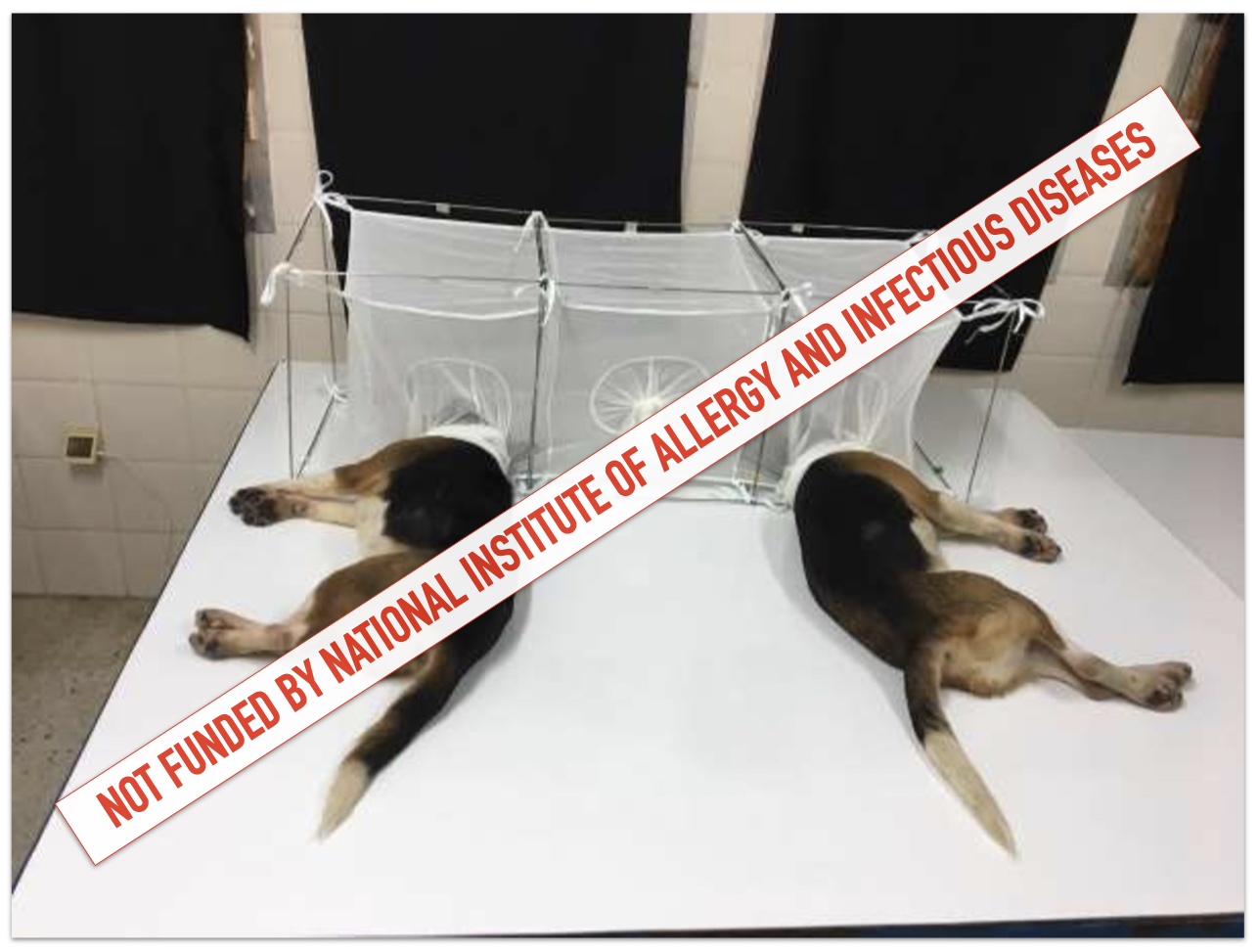 This photo is from a study in Tunisia, published in PLOS Neglected Tropical Diseases, that erroneously listed the National Institutes of Health as a source of its funding. The journal has published a correction.

Through July 2021, the NIAID did fund a separate project in Tunisia to test a potential vaccine for leishmaniasis, a parasitic disease transmitted by sand flies, the agency said. But the study involved immunizing 12 dogs and letting them roam around in an enclosed open space set up to mimic natural settings. The dogs were not sedated, trapped in cages, or fed to the flies.

metmike previously: What problem do you have with the test in the paragraph above mcfarm?

Seriously mcfarm, I know where you are getting all this stuff from. You aren't the king of objective internet investigating and fact checking and like almost everybody else,  your sources are feeding it to you. What they state.........is what you know.

There is close to a one to one correlation with this.

Nothing personal, but as your friend, I'm just pointing out that your sources often tell you false things for their self serving political agenda.

my problem is I ever trusted Fauci or WHO from day one. I may have missed some things but I never called myself "science" like he did. Never got caught throwing the baseball out at a major league game like some movie star and never was caught sitting in the stands later with no mask. Mind you this was early in the pandemic and at the same time he new totally about all the Wuhan crap and yet le us go done a destructive road that led further to the "atmosphere" in America of total divisive unnecessary fighting. This man was instrumental in hurting millions of citizens health, both physical and mental, putting our children years behind in education and social growth, and as I said earlier all he had to do really was just be honest.

Again, the across the board condemnation for Dr.  Fauci  about everything that he did based on hatred and political, tunnel vision thinking is unjustified.

Here's one HUGE reason why:

Sorry, but you guys are DEAD WRONG.

Because we had the free tests from the government at home, I was able to test her immediately at home. Not go to a testing center with her being extremely sick, then wait 2 days for results.

Because we had free Paxlovid available, with a couple of phone calls and being proactive/knowledeable, she had the Paxlovid in less than 2 hours after she tested positive.

Time is a key factor in effectiveness for Paxlovid. Because it was administered so quickly, we stopped the COVID in its tracks.

She has a serious breathing disorder and compromised immune system. Not being able to take this prompt action would have, 100% resulted in her going to the emergency, then being an in patient in the hospital with 10s of thousands in hospital bill.s

Not having the Paxlovid so quickly made her at high risk for death.

Biden and his COVID policies likely saved my wife's life and  many others had similar situations.

And guess who was running the show for him  during that time?

You guys are just extremely MISinformed about this!

The absolute evidence is here: